Starbucks just launched a breakfast sandwich made with vegan sausage made by California-based brand, Impossible Foods.

The Starbucks Impossible Breakfast Sandwich includes high-protein, soy-based sausage, plus animal-based cheddar cheese and eggs served on ciabatta. This follows the launch of a similar breakfast sandwich made with Beyond Meat and served at Starbucks in Canada.

Other chains have also launched similar items, recognizing the demand for additional plant-forward meals on the menu.

In 2018, OnePoll reported that approximately one out of every three U.S. consumers considered themselves flexitarian, eating at least four plant-based meals every week. Such options offer an opportunity for customers—and brands—to reduce the environmental impact of individual meals and menu items.

“Starbucks’ commitment to add more plant-based ingredients to its menu is a new benchmark for large corporations,” said Dr. Patrick O. Brown, Founder and CEO of Impossible Foods. “We’re excited to work with Starbucks, which shares our mission to make the global food system sustainable.” 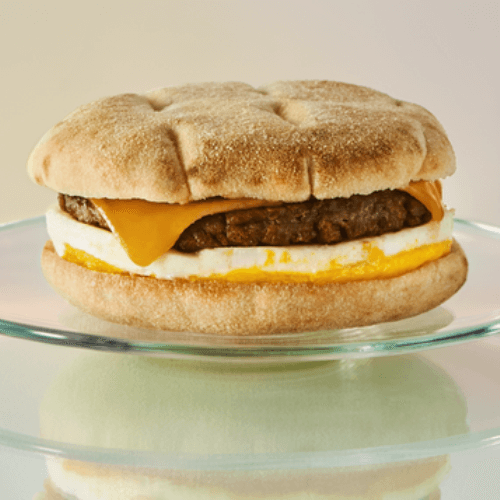 The Impossible Breakfast Sandwich is the latest menu item to include plant-based ingredients from Starbucks. The company has spoken previously about increasing consumer interest in vegan options as well as the environmental benefits of expanding the menu.

“Over the years, in response to customer interest, we have added plant-based milk alternatives such as soy, coconut, almond, and oat milk. We are thrilled to expand our plant-based menu into food with this new breakfast sandwich,” added Kobori.

According to the press release, Starbucks aims to continue expanding plant-based choices in order to become a “resource positive” company. Adding these sustainable, plant-focused options is a major part of Starbucks’ ongoing environmental strategy.

The Impossible Breakfast sandwich is available now to customers using the Starbucks App to order ahead with contactless payment. Those isolating at home can use Starbucks Delivers through Uber Eats nationwide.