The new drink features vegan Irish cream syrup mixed with cold brew and coffee poured over ice. It’s then topped with foam and a dusting of cocoa powder. To make it vegan, order it with plant-based milk. Canadian customers can order a hot version of the drink, called the Irish Cream Americano.

“It pairs so well with cold brew because of the chocolate flavor in the Irish cream and the cocoa notes from the coffee,” said Erin Marinan, product developer for Starbucks R&D. According to Marinan, the drink was inspired by memories of making homemade Irish cream for her family. Of course, the Starbucks version is alcohol-free.

She continued, “I think about that customer who’s in the middle of work or shopping, and this will help get them into the holiday spirit for the rest of the day.” 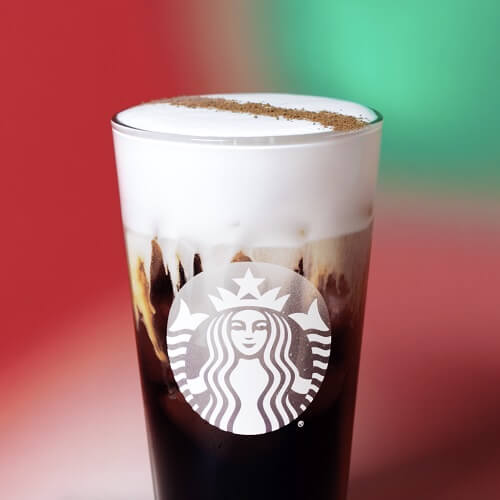 The new Starbucks drink is inspired by Irish cream.

Traditionally made with dairy, Irish cream is a staple in many holiday cocktails. But, these days, you can find vegan versions in stores.

Starbucks has a few vegan drinks available for the holidays this year. The Chestnut Praline Latte, with notes of caramelized chestnuts and spices, can be made vegan by ordering it with plant-based milk.

The hot chocolate is made with mocha sauce and milk, so just order it with soy, almond, or coconut and leave off the whipped cream. Starbucks hot chocolate can also be customized with any of the vegan syrup flavors — try peppermint, chestnut praline, or vanilla. You can also order apple juice steamed with cinnamon dolce syrup for a cozy apple cider-like drink.

The Irish Cream Cold Brew is available for a limited time in select stores.