The biggest coffee chain in the world added more plant-based food and drink options to its menu than ever before. The move is in response to consumer demand. In the last few years, more people have learned of the health, ethical, and environmental benefits of steering away from animal products.

Nearly half of U.S. consumers now regularly purchase vegan milk, according to a 2019 study. In the UK, Brits are continuously choosing plant-based options over animal-based ones. In fact, a study by supermarket chain Sainsbury’s revealed that 91 percent of UK consumers identify as flexitarian.

The story isn’t unique. It’s the same in many countries around the globe, with vegan meat and dairy-free products becoming bigger business than ever. And Starbucks knows this. At the 2018 Seeds and Chips global food conference in Milan, founder Howard Schultz said, “the opportunity for plant-based food is huge.”

The Importance of Sustainability

Starbucks knows there’s more to sustainability than offering vegan options. It took steps to reduce its carbon footprint by announcing that by 2025, it aims to run 10,000 stores on renewable energy.

Kevin Johnson, Starbucks’ chief executive officer, spoke on a conference panel at the Global Climate Action Summit in 2018. He said, “If you look at this problem on a global basis, it can be so overwhelming it’s discouraging. The only way to look at this problem is, ‘am I partnering with other like-minded organizations in the public and private sectors and NGOs to work progress?’”

He explained that although Starbucks is, of course, about turning a profit, it’s “also about doing what’s right.” He continued, “One of our social impact pillars is sustainability. We are a company that believes, in the fabric of mission and values, that the pursuit of profit is not in conflict with the pursuit of doing good.” 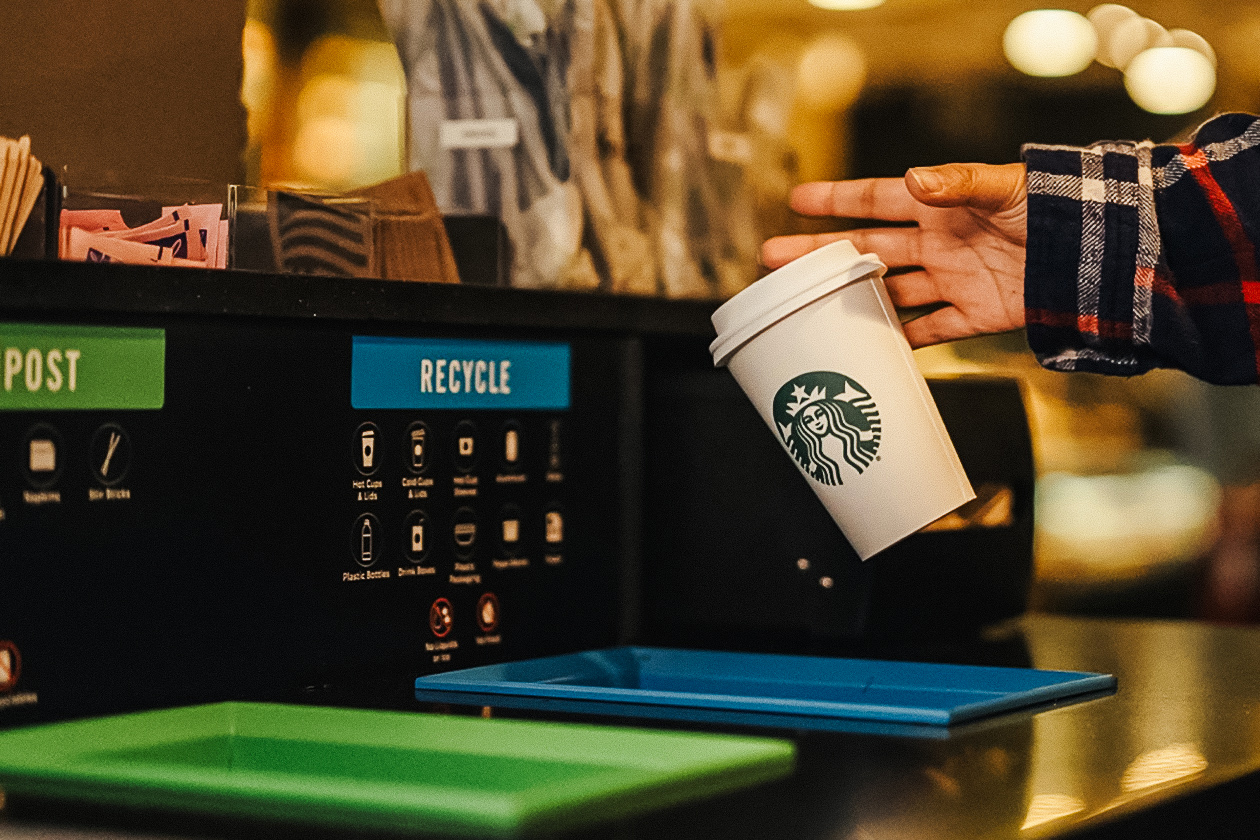 In addition to increasing its vegan options, the company is focused on sustainability. | Starbucks

The chain has also debunked the myth that paper coffee cups can’t be recycled. In 2018, it managed to recycle 25 million coffee cups after sending 18 truckloads to Sustana, a paper mill in Wisconsin to “make a point,” according to Fast Company. Jay Hunsberger, the VP of sales for North America for Sustana, told the publication that Starbucks wanted to “demonstrate that a coffee cup can be turned back into a coffee cup.”

Starbucks is also on a mission to do what it can to combat plastic pollution. That same year, it revealed its decision to eliminate straws from all of its stores. The chain replaced them with lids for cold cups, similar to the design it uses for its hot beverages.

Starbucks Vegan Options Across the Globe

If you’re planning on taking a trip to Starbucks anytime soon, what can you eat while you’re there? Here are Starbucks’ vegan food and drink options that could be available to you.

Starbucks Vegan Options in the U.S.

Although the chain doesn’t offer certified vegan drinks, it does offer a variety of non-dairy beverages. These include iced coffee, cold and hot brews, caffe Americano, Pink Drink, Green Drink, Violet Drink, and unflavored latte and espresso. Customers can request plant-based milk options of almond, coconut, soy milk, and Oatly oatmilk, which the chain recently launched nationwide. They can also opt for a flavored syrup, such as Vanilla, Caramel, Hazelnut, which do not contain animal-derived ingredients.

Starbucks Vegan Options in the U.K.

In early 2020, Starbucks UK added vegan mac ‘n’ cheese and an all-day breakfast burrito to its shelves. For lunch, you can also snag a vegan roasted veggie salad or beetroot wrap. Asda customers can also sip on dairy-free iced coffee with almond milk.

Starbucks just launched the Chocolate Chip Cookie Latte for a limited time, which customers can order vegan. It’s now on menus across Europe, the Middle East, and Africa. Starbucks Europe also rolled out an Original Nut Blend. According to the chain, the dairy-free alternative features “a blend of light rice, sweet hazelnuts with subtle chocolatey notes, and buttery cashews.” It’s available in select markets across Europe, including the U.K.

Coffee lovers can snag a hot or cold drink at Starbucks locations in Canada and Australia, too. The former was a step ahead in the U.S. in launching oatmilk nationwide. It added the plant-based milk to its menu in August 2020. Canadians can also enjoy the chain’s Oat Latte and dairy-free sesame lattes.