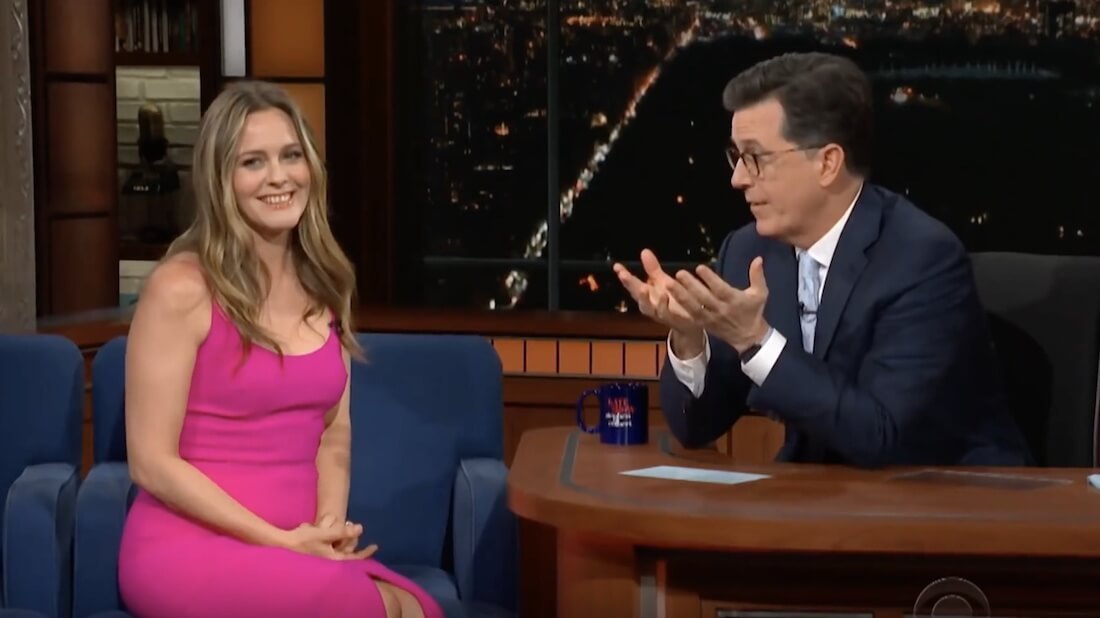 As soon as the obligatory pleasantries were exchanged, Colbert immeidately brought up the vegan in the room. He announced, “You’re a vegan,” right out of the gate. Silverstone affirmed with a smile, and Colbert continued, “You know this time last year I became a vegan.” Before Silverstone could get too excited, Colbert admitted, “I’ve fallen off the wagon.”

Silverstone praised Colbert’s effort nonetheless. She said she supports “any progress in the [vegan] direction.” She encouraged everyone to simply give plant-based a try and do the best they can.

When Colbert mentioned that he went to a baseball game and ordered two hot dogs without even thinking, Silverstone informed him that they have veggie dogs at most stadiums. She didn’t admonish Colbert for his less-than-compassionate food choice; she mentioned this fact to offer some advice for the next time he attends a Dodgers game.

Colbert went on to ask when, and why, Silverstone went vegan. She explained that she went vegetarian at eight years old after making the connection between what she was eating and the animal it came from. She said she was on an airplane eating lamb, and her brother started making lamb noises. That was enough for the realization to hit. She “flirted” with vegetarianism and veganism until she was 21, when she was confronted with some disturbing footage that showed where animal-based foods actually come from. The video was enough for Silverstone to turn her flirting into a serious relationship with veganism.

The conversation with Colbert then turned to Silverstone’s brief work with President Donald Trump. About 10 years ago, he had hired her as an eco-advisor to discuss the potential of installing solar panels on his buildings. She claimed that their conversation was “very lovely” and he was “very charming and very kind.” However, Trump ultimately decided not to go with the solar panels, potentially due to their expense.

Prompted by the audience’s teasing, Silverstone made an effort to justify her decision to meet with Trump. “It was worth it to take the meeting because if I could get him to have every building have solar panels on it, wouldn’t that we a great accomplishment? I’ll take one for the team,” she stated.

Silverstone has continued to be a voice for the animal welfare and sustainability movements, most recently appearing in a PSA for the Physicians Committee for Responsible Medicine, urging California constituents to support the California Cruelty-Free Cosmetics Act. In the entertainment world, she is now starring in a new television series, “American Woman,” airing on the Paramount Network.