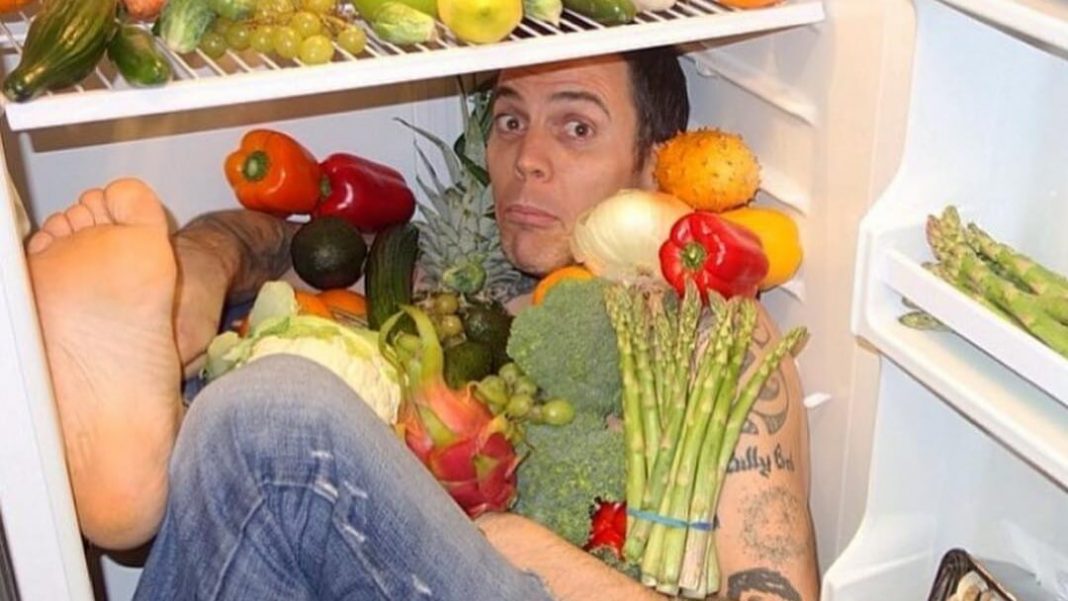 “To all the combative, annoying vegans who are choosing to attack me for not forcing veganism on my cats, and for not being a strict, militant vegan myself (even though I haven’t eaten any meat other than fish for well over ten years), please consider that you’re doing more harm than good,” he wrote. “Maybe stop working so hard to pit people who are on your team against you.”

The former “Jackass” star is not shy — two posts prior to his vegan rant shows him and his fiance naked and locked in a sex position in front of an open hotel window overlooking Vancouver. And he’s not shy about his commitment to animals, either. The star made headlines last year after he rescued a street dog from Peru. He used his bare hands to detain African poachers. He’s actively surveying locations for an animal sanctuary. He frequently promotes and endorses vegan brands and platforms.

On the surface of the post, it seems a bit like Steve-O is being combative, defensive even against his critics. But “militant” vegans are a thing and extremism can make progress incredibly difficult — especially when it comes off like shaming or bullying.

People have their aversions, of course, and we all have the right to think what we want. But progress does happen like this, a little bit at a time. The C.S. Lewis quote I love to misquote says it best: “Isn’t it funny how day by day nothing changes, but when you look back everything is different?”

That’s the essence of progress. These little changes — good or bad — don’t seem massive until you look back and it’s a totally different world. The Internet is like that. The auto was (and still is if you’re Elon Musk). And, the way we eat is like that, too. Twenty-five years ago when I went vegan there were only three dairy-free milk brands. Now there are quite possibly more than 103. Progress.

Let’s unpack Steve-O’s cats. They appear to not be vegan per his post. (I could only find pics of him with his rescue dog who may or may not be vegan.)

As I sit here typing this, I’ve got a cat curled up at my feet. She’s asleep — mostly. But as the refrigerator creaks or my typing ticks up a notch, her ears twitch. If a mouse were to suddenly dart across the living room ever so silently, she’d be alerted to its presence in seconds (before my inevitable, audible screams). Her ears would prick up, her eyes would lock. Within seconds, she’d pounce. And, as much as I love broccoli or — what’s the vegan mouse equivalent, a donut, maybe? — my ears stay tucked under my hair. I can’t even twitch them if I try to force it. My eyes don’t dart (ok, maybe a little, delicious donut bae). There are a lot of debates about what companion animals should eat, but most experts will agree with Steve-O that a strictly vegan diet is problematic at best and disrespectful and even deadly at its worst for cats. They are carnivores.

It’s a fair criticism to take issue with the pet food industry at large. It’s fraught with problems that can create numerous health issues for our beloved animals. It’s environmentally intensive. It’s exploitive. But it’s also an issue we created in large part by our love of meat, eggs, and dairy. That addiction — yes, addiction — created a complicated industry built on animal byproducts. Of course, there are cleaner pet food brands out there. But with more than 3 million homeless cats surrendered to U.S. shelters each year adopting these pets is critical, no matter what we feed them.

Fuck, vegans can be annoying. To all the combative, annoying vegans who are choosing to attack me for not forcing veganism on my cats, and for not being a strict, militant vegan myself (even though I haven’t eaten any meat other than fish for well over ten years), please consider that you’re doing more harm than good. Maybe stop working so hard to pit people who are on your team against you.

Eating is complicated. Just ask author and professor Michael Pollan. He’s dissected this subject more than anyone. And while he is now eating mostly plant-based himself, he’ll be the first to tell you that might not work for everyone. Whether for health or religious reasons, access, culture, or just a really profound love for meat, most of the world eats animals. That doesn’t mean it’s right or better or healthier. But it is the reality.

Like Pollan discusses in his 2013 book, “Cooked,” we’ve been doing a few very profound things to our food for millennia (namely heating in various methods to most easily extract the nutrients and in some cases, like fermenting, create entirely new ones). Humans have also been eating animals for a long time, too. And as much as science is now making it easier than ever not to, changing our diets isn’t just a new piece of software to download and install. There is some hardware we have to adjust. Even replace. And if you’ve ever dropped your MacBook off at the Genius bar because your daughter got peanut butter in the keyboard console (just me?), you know this can take some time.

We’re getting there. And as science steps up to the challenge, we can literally have our meat and eat it too, thanks to cell-based meat grown without the need for slaughter.

But the bigger discussion here comes down to whether or not a current or former vegan Steve-O is wrong in being who he is — and if that means eating fish when or where or why-ever — that’s what he chooses. After all, does the perfect vegan even exist (besides Miley Cyrus)? And it doesn’t seem like Steve-O makes many choices lightly.

Being alive is really hard. It’s confusing and beautiful and scary. And if that’s not enough — we must make choices. Every single day. It’s kind of incredible we’ve gotten this far as a species with consciousness being such a burden. Some of us make choices we think are better for ourselves and some of us make choices we think are better for others. Most of us usually do a good bit of both. And the way we make those deductions is progress — those little evolutions we have daily. Those moments where maybe all we do is think a bit differently about something even if we end up making the same choice as we did the day before and the day before that — that’s still progress. There’s that saying about Rome not being built in a day, after all. We’re all works in progress.

Will the world ever go fully vegan? Maybe. Maybe not. But does that really matter today? Right now? Does perfection? If we want to reduce suffering, then all we have is right now to focus on. Will a vegan eat meat tomorrow? Who knows. Life is unpredictable. That’s what makes it worth living. Coming to grips with the impact of torturing, killing, and then eating other animals is a big deal. It’s maybe the biggest shift in consciousness a human can have after facing their own mortality. But it is, most often, a road. A long one. Steve-O seems to clearly have both feet in front of him on that path. He’s not unaware. And awareness is the first step in making any change.

“Maybe stop working so hard to pit people who are on your team against you,” he writes. But I’ll take it a step further and say if you want to be a better advocate for the animals, maybe there is only really one team — vegans, meat-eaters, flexitarians, pescatarians, and even those people who find insects to be a legit source of protein. We’re all in this together. Bullying never makes things better. Finding common ground does. It moves the ball forward for everyone. It’s the only way to win.