In an exclusive interview with Just Jared in 2017, Sink revealed 10 fun facts about herself for fans. Among those facts was her veganism, which she says was inspired by fellow actor and activist Woody Harrelson.

She explained, “I am a passionate vegan. I actually was a vegetarian for about a year and when I was working on ‘The Glass Castle’ with Woody Harrelson, he and his family inspired me to become a vegan.”

In a recent interview with Elle, Sink opened up more about how Harrelson’s family managed to convince her to make the switch. “His daughter and I had a three-day sleepover,” she recalled. “The entire time I was with them I felt good about what I was eating, and not like I was missing anything.”

Nowadays, she says one of her go-to meals is butternut squash and spinach lasagna, which she makes for own family; it’s even one of her father’s favorite dishes.

Embracing the Ethical Side of Veganism

The young actor recently took a break while promoting “Stranger Things 3” to pay a visit to The Gentle Barn, a California-based sanctuary for animals saved from abuse and neglect, and called for her fans to learn more about its residents.

“This incredible sanctuary rescues and rehabilitates animals of all kinds from neglect and abuse,” Sink wrote on Instagram. “The Gentle Barn does incredible work, providing their animals with the highest quality of care. I encourage everyone to check out their website to learn more about the animals and how you can help!” 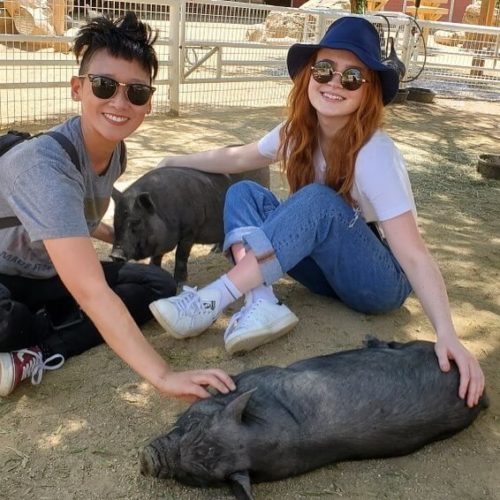 Sink has previously opened up to Elle about her passion for veganism. In 2018, she told the magazine more about the ethical reasons behind her decision.

“I realized what goes on in the egg industry and the dairy industry,” she explained. “Then I was like, ‘that’s it! going vegan!’ and I just kind of went cold turkey basically.”

Sink is passionate about animal rights; her favorite documentary is 2013’s “Blackfish,” the hard-hitting exploration and exposé of SeaWorld and the animals they capture and breed.

She believes that more people can do their bit to help the animals. “If the vegan diet doesn’t work out for you, at least you can do something for animals,” she said. “Whether that’s the way you eat, or the way you dress, everything helps really.”

She urged consumers to be particularly conscious of fashion. “It’s crazy because they’ll find ways to sneak in animal products or animal-based clothing items into your clothes,” she warned. “So I guess just kind of like do your research … there’s a lot of vegan options out there, like more than you think.”

“Stranger Things” returns to Netflix for a third series on July 4.