While it is common for fast food outlets to provide salads for vegan and vegetarian customers, Max Burgers’ new meat-free burger and snack additions are as hearty as the company’s animal-based dishes.

The new menu includes the Crispy No Chicken Burger, Chili ‘n’ Cheese Burger, Grand Deluxe Umami Halloumi, and Crispy Nuggets, all of which are “lacto-ovo” vegetarian-friendly. The term refers to vegetarians who consume no meat but do eat dairy and eggs in some quantities. The pre-existing BBQ Sandwich, which features plant-based meat from Oumph!, is fully vegan. 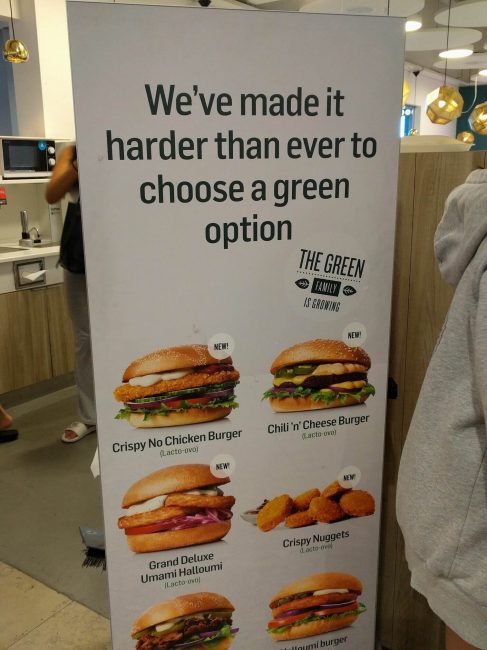 “[T]he campaign specifically reached out to flexitarian consumers rather than vegans or vegetarians, and this was very important. There was also a range of new products, not just one,” Kaj Török, Chief Sustainability Officer for Max Burgers, told Sustainable Brands. “It’s the vegetarian or flexitarian amongst the group that often makes the call on where to head out for dinner. We welcome these consumers because they are well-informed, have money, and help attract a new segment of burger eaters that have traditionally avoided quick-serve burger restaurants.”

The chain first became serious about reducing its environmental impact in 2006 when it analyzed its personal carbon footprint and found that meat patties contributed the most to climate change. Two years after the research, it added carbon footprint information to each of its menu options so that environmentally-conscious customers could choose food with a low greenhouse gas emission. “We did have a 15 percent change towards food options with lower GHG footprints, but this was a shift from very low levels,” commented Török.

Notably, the company has set a target to see just half of its sales include red meat by 2022. To facilitate this, it introduced the Green Family range in 2016 – the range is vegetarian and offers one vegan option. To date, Green Family is the chain’s most successful launch and led to a 10 percent turnover increase. According to Sustainable Brands, at present, 33 percent of Max Burgers’ sales are red meat-free.

Sweden is a nation with a widespread affinity for plant-based food. A report released in March said that meat consumption in the nation had hit a record low. Simultaneously, sales of the McDonald’s McVegan burger in Sweden well-exceeded expectations across the country.