Alongside cod, salmon and tuna are the most consumed species of fish in Europe. As it stands, the industry is unsustainable. Seafood consumption has increased rapidly in the past two decades, leading to problems with overfishing. Sixty percent of the world’s fisheries are fully-exploited or fully-fished.

After becoming aware of the major problems in the seafood industry, Hooked co-founders Emil Wasteson and Tom Johannson wanted to create a more environmentally-friendly option.

“The current seafood industry is already unsustainable,” Wasteson told LIVEKINDLY. “[It] is expected to grow with another 30 percent until 2030.”

He mentioned the risks of overfishing and destroyed ecosystems, as well as the issues that come with oxygen-deprived fish farms. Fish that escape can threaten ecosystems.

There are also health issues that come with eating fish. It can contain microplastics and heavy-metals. Farmed fish are often fed low-quality feed, which can lead to a “‘bad fat profile in the seafood,” said Wasteson. 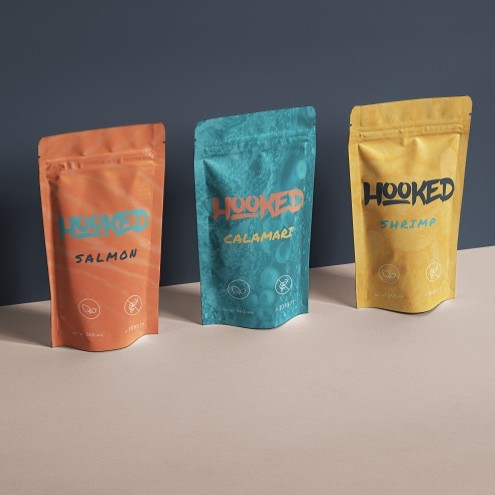 Hooked hopes to offer a wide range of vegan seafood options in the future.

The brand is developing vegan tuna and vegan shredded salmon using soy protein isolate.
Sea algae and seaweed help with the fishy flavor, and a wet extrusion method helps achieve the right texture. According to Wasteson, Hooked can scale its plant-based solution “without harming the planet.”

The vegan seafood alternatives will include all the good seafood nutrients, like omega-3 and protein. “We believe both the environmental and health aspects are important,” added Wasteson.

In the future, Hooked also aims to offer vegan prawns and calamari. Its first product will be vegan tuna, but its “hero product” will be the flaked salmon, which is currently still in development. Wasteson said: “it will be a shredded salmon with various flavors, perfect to use in bowls, salads, wraps, pies, and pasta dishes.”

First, Hooked will aim to offer its products in the foodservice and ready meal industries in the EU, before moving into retail eventually.

Wasteson noted: “We believe the biggest social impact and monetary potential in the food system is to make it as easy as possible for regular people to choose more sustainable alternatives in their everyday life.”