This past weekend at San Diego Comic-Con (SDCC), one of the largest annual comics conventions in the world, attendees were invited to have a taste of the future. As reported by Eater San Diego, the convention featured a futuristic Taco Bell pop-up restaurant heavily inspired by the 1993 science fiction film “Demolition Man,” where Taco Bell is vegan in the future.

In the film, which opens in the year 1996, lead character Sergent John Spartan, played by American actor Sylvester Stallone, is wrongfully arrested for manslaughter and, along with lead antagonist Simon Phoenix played by Wesley Snipes, is incarcerated and cryogenically frozen in a new Los Angeles penitentiary. During the time that Spartan and Phoenix are frozen, a major earthquake strikes California, leading major cities Los Angeles, San Diego, and Santa Barbara to merge into a single city called “San Angeles.” Under the rule of an evangelical, authoritarian pacifist, the city of San Angeles becomes a utopic metropolis. In 2032, Phoenix is thawed for a parole hearing, but ultimately escapes, and the police force, ill-equipped to handle a violent criminal, unthaws Spartan to track him down.

Amidst the hunt for a dangerous criminal, Spartan is left to discover how the world has changed since he was frozen in stasis. Among the many changes is the fact that Taco Bell is the sole survivor of “the franchise wars” and now serves futuristic, plant-based food such as a deconstructed taco targetting high-class consumers. The city’s elite, as demonstrated in one scene where an officer refuses to eat a hamburger (albeit, a hamburger made from rat meat), seem to refuse to partake in eating meat.

Curious what the future of Taco Bell might look like? Get a glimpse with #TacoBell2032: Demolition Man Experience.

The pop-up restaurant took over Greystone Prime Steakhouse & Seafood for the duration of the event, decorating the space with video screens depicting scenes from the movie as well as displays of characters and one of the film’s futuristic transportation vehicles. An on-site shop sold “Demolition Man” merchandise. The menu featured an exclusive line-up of minimal, plant-centric meals inspired by the high-end Taco Bell of the future – including a deconstructed taco.

A futuristic spin on the restaurant’s Crunchwrap Supreme featured an ingredient called “seared outlawed aminos,” likely a nod to the shift away from eating meat in the film. While it appears that all items from the Demolition Man pop-up menu featured animal products, save for the “Cinnamon Helix,” which may have been a take on the restaurant’s vegan cinnamon twists, Taco Bell is known for its plentiful vegan options. The restaurant even has an app where customers can easily swap meat and dairy for ingredients like beans and avocado.

Though “Demolition Man” paints a fairly authoritarian portrait of an American future where meat is not featured at the center of every plate, other forms of science fiction media have speculated that the future of food is vegan in a more altruistic fashion. 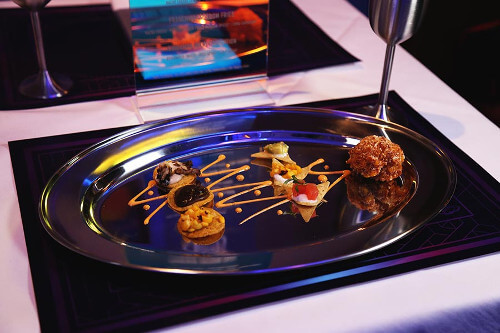 In “Star Trek: The Next Generation,” the second live action in the “Star Trek” franchise, a conversation between Commander William T. Riker and a member of a species of rat-faced, anthropomorphic aliens that eat meat while it’s still alive reveals that humans no longer use animals for food. Although fans of the show have seen characters dining on animal-centric meals, food is replicated using future technology that can create meat that is indistinguishable from the real thing. In a way, “Star Trek” may have predicted the rise of clean meat.

“You’ve seen something as fresh and tasty as meat, but inorganically materialized, out of patterns used by our transporters.” The Vulcans, a species of nonviolent humanoid aliens, also eschew meat entirely.

British comedian Simon Amstell’s 2017 mockumentary “Carnage” also envisions a future where veganism is the norm by the year 2067. In the film, a narrator explains to a group of young people how the world came to embrace the plant-based future of food. For years, warnings of meat’s link to climate change are ignored until a major outbreak of Swine Flu sours the public opinion of meat and eventually gives rise to a new wave of compassion for animals.

Outside of fiction, it seems that we truly are approaching a future where plant-based food is the norm. Vegan fast-food franchises such as By Chloe, Lord of the Fries, and Veggie Grill are poised to continue growing amid rising demand for vegan food. At vegan meat brand Beyond Meat’s futuristic El Segundo, Calif. facility, food scientists use technology in order to test the realistic taste, texture, and even smell of its products. Clean meat, or slaughter-free meat made using animal cells, may be on the market as soon as the end of the year. What this means for the future of meat is left to be determined.