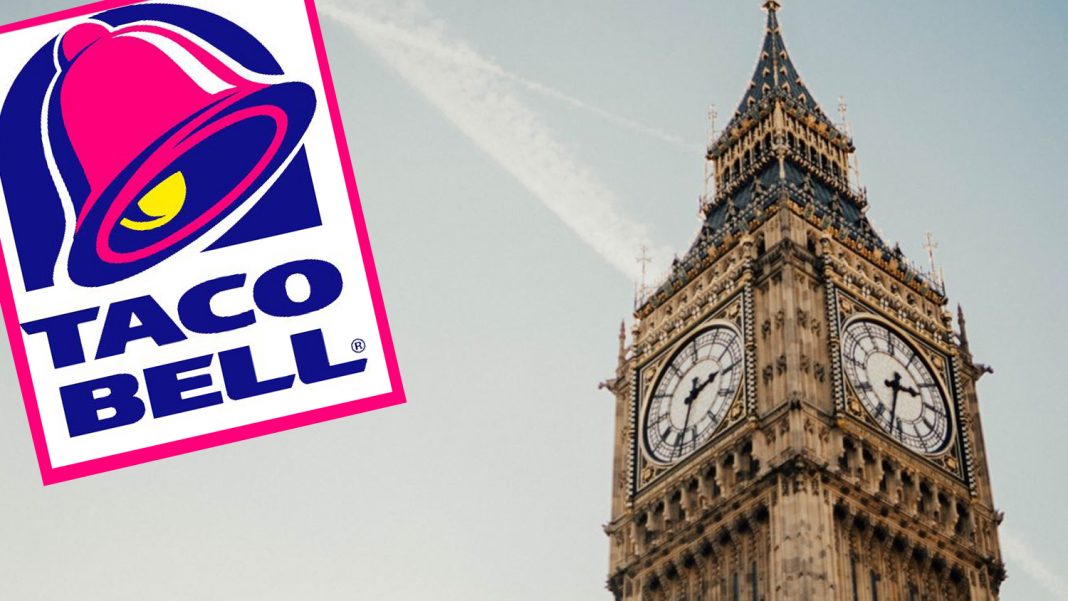 The California-based company revealed the news via a prank, where the brand’s signature bell was digitized to mimic the chimes of Big Ben – the Great Bell of the Palace of Westminster’s clock, a major tourist attraction in London. The chimes, played through parametric speakers in the vicinity of Big Ben, were heard hourly.

Marisa Thalberg, Taco Bell’s Global Chief Brand Officer, explained in a statement: “We don’t take ourselves too seriously and have been known to play a prank or two.” She went on, “Restoring Big Ben’s bell with our bell was the perfect way to introduce ourselves to London in a way only Taco Bell can.”

Thalberg hopes that the brand’s “unique twist on Big Ben’s chimes brought surprise and humor to Londoners; this was our little arrival gift as we gratefully show up on London’s doorsteps.”

London, we heard Big Ben was quiet, and thought we’d chime in. As you could use more Bells in your life.

Located in Hammersmith, the restaurant joins 28 other Taco Bell UK locations. The chain also plans to open three more London eateries: a Holborn location on November 30th, a Croydon location in December, and a Fulham location early next year.

How to Eat Vegan at Taco Bell

Taco Bell offers a range of meat-free tacos, burritos, and quesadillas which can easily be tweaked to avoid dairy.

Among the vegan-adaptable options are the Fajita Burrito, Crunchy Taco Supreme, Crunchwrap Supreme (with beans rather than meat, and no sour cream or cheese), and Nacho sharer, also without cheese or sour cream. The red, border, and fiesta sauces are also vegan-friendly, as are the guacamole, salsa, and pico de gallo.

Earlier this year, attendees of the San Diego Comic-Con were invited to taste the future – and it was vegan. The comic convention featured a futuristic Taco Bell pop-up, inspired by the 1993 sci-fi film “Demolition Man” which showed a plant-based Taco Bell.

Curious what the future of Taco Bell might look like? Get a glimpse with #TacoBell2032: Demolition Man Experience.

Supporting this possibility, Taco Bell launched a new range of vegan snacks earlier this year. The tortilla chips, available at grocery stores around the U.S., are inspired by “iconic” Taco Bell flavours and offer a convenient, plant-based “new way to access a taste of Taco Bell.”