Earlier this week, a volunteer donning an orca costume was contained to a tiny tank outside of a Pittsburgh AAA Automotive Club office in a bid to urge the company to end ties with SeaWorld.

Throughout the day, the activist pleaded to passerby for help, calling attention to the unsuitably small habitats that the marine park’s orcas live in. While the Pittsburgh protest took place on October 17, similar events will take place throughout the country to urge organizations to sever ties with the marine park. The demonstration was organized by the international animal rights organization PETA (People for the Ethical Treatment of Animals), which has campaigned against AAA’s ties with SeaWorld on previous occasions.

“No reputable company would want to be mentioned in the same breath as SeaWorld, which has killed 40 orcas to date and sentenced many more to miserable lives in concrete prisons,” said PETA Executive Vice President Tracy Reiman in a statement. “PETA is calling on AAA to leave this cruel abusement park in the dust.” 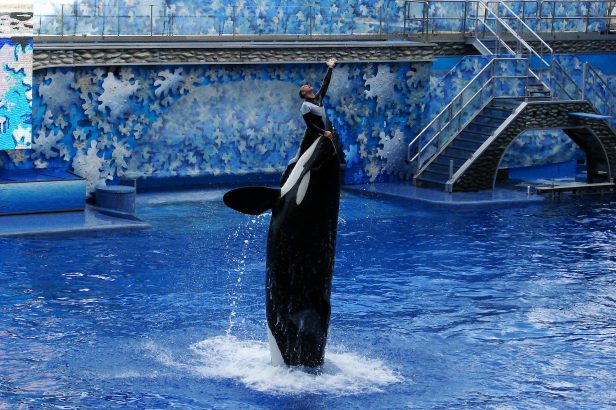 Like many other travel and tourism businesses, AAA offers customers discount ticket packages to SeaWorld. The once-beloved marine park has quickly fallen out of favor since the release of the 2013 animal rights documentary “Blackfish,” which told the story of Tilikum, the now-deceased orca who was involved in the deaths of three individuals over the course of his more than two decades in captivity. The film examined how and why SeaWorld’s conditions damaged the killer whale’s mental health, leading to his attacks.

According to the website SeaWorld of Hurt, wild orcas may swim up to 100 miles per day, but the tanks that the park’s orcas are confined to are less than 350 feet long. Slowly, the public is coming to realize that marine captivity conditions are cruel. Ticket sales have been steadily declining since the release of “Blackfish,” leading CEO Joel Manby to resign earlier this year. Last month, SeaWorld was ordered to pay $5 million for misleading investors about the welfare of its animals.