Tesco, the UK’s leading supermarket chain, just launched its own-brand line of allergen-friendly vegan cheese in its Ireland locations. The plant-based collection was spotted at a Tesco in Bray by a member of the Dublin Vegans, a community Facebook group.

Although UK customers have enjoyed these plant-based cheeses for over a year, Ireland consumers have not been afforded the opportunity, until now. The Dublin Vegans Facebook post revealed a full shelf lined with the stores’ vegan cheeses, sporting a bold “NEW” sign next to each price tag. 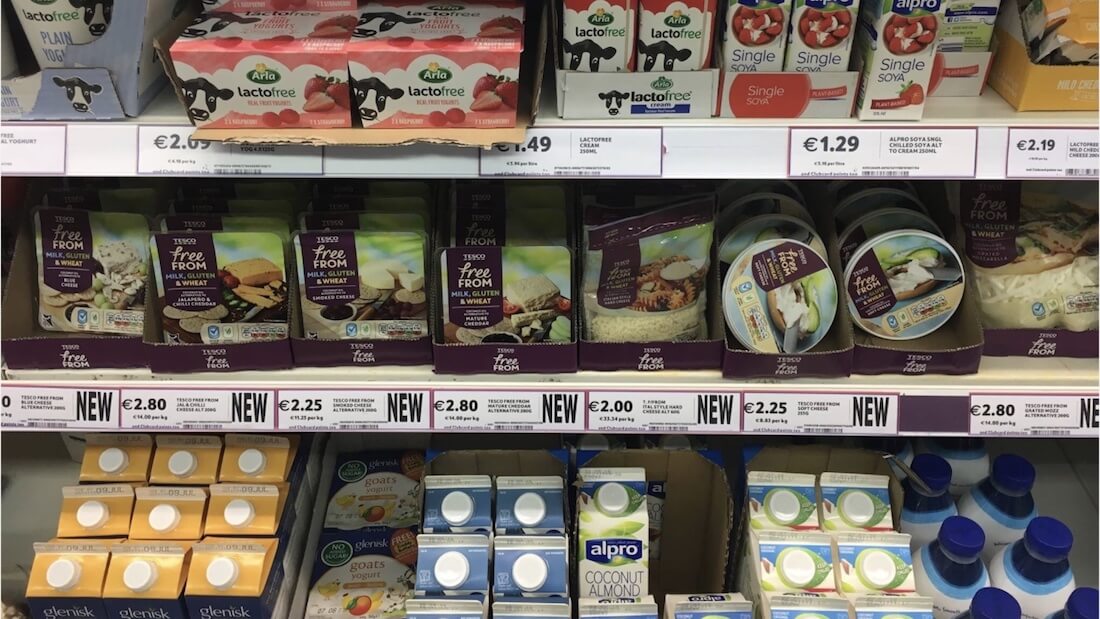 Tesco has proven to be a leader in the plant-based movement among UK and Irish supermarkets. The company has demonstrated major efforts in expanding its vegan offerings, both through its Free From brand and partnerships with cruelty-free businesses. This plant-based push could also be credited to Chef Derek Sarno, who acts as Tesco’s executive chef and director of plant-based innovation. Sarno makes up one half of the Wicked Healthy duo with his brother, Chad, who together have created a “free from animals” culinary brand, including a recipe blog and cookbook.

Ireland may not yet have quite as many vegan options as the UK, but the country has seen significant progress. In the greater Dublin area, The Happy Pear cafes and food stores offer wholesome plant-based fuel available for dine-in or take-out. One can also find homemade vegan meats and sauces courtesy of Moodley Manor at select Dublin restaurants or by following the Moodley Manor food truck. Further, dairy sales have seen a steady decline amongst Irish consumers, so much so that the dairy industry has created a propaganda campaign against plant-based alternatives that threaten milk and cheese sales.