Tesco already sells vegan frozen mini sausage rolls, but the new ready-to-eat option will be sold in the bakery section, according to a store file. Each soy-based sausage roll contains 11.2 grams of protein. 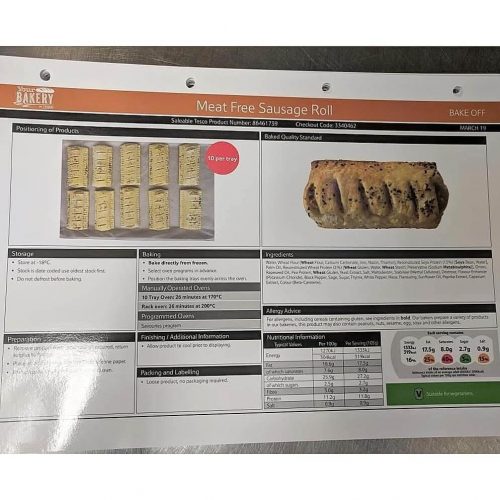 Tesco appears to be following in the footsteps of Greggs; the bakery chain’s first-ever vegan sausage roll launched earlier this year with huge success. Many customers initially looking to try the meat-free sausage roll were met with “sold out” signs.

Meanwhile, others took advantage of vegan sausage roll mania by selling the £1 pastry for up to seven times the price on eBay, despite being days-old.

Last February, Greggs credited the vegan sausage roll for helping it top £1 billion in sales for the first time ever.

“Whilst there are significant uncertainties in the months ahead, Greggs has started 2019 in great form, helped in part by the publicity surrounding the launch of our vegan-friendly sausage roll,” chief executive Roger Whiteside told ITV News.

Whiteside also revealed that it was the fastest-selling new product Greggs launched in six years, climbing into the “hundreds of thousands.”

A poll on the Greggs Facebook last month pitted the vegan sausage roll against its traditional counterpart. “You can save only one…,” Greggs wrote. It ended with 68,000 voting for the vegan version compared to 41,000 in favor of the regular sausage roll.

The UK’s largest supermarket chain is also one of the most vegan-friendly. Its own-brand range of plant-based meals, Wicked Kitchen, launched in early 2018 and more than doubled sales expectations by June.

The company revealed that it is aware of the rising consumer demand for plant-based food. Earlier this month, Tesco announced that it would begin selling vegan meat brands in the meat aisle in a bid to get people to choose more plant-based food.

“We are seeing a new kind of shopper – more conscious of their own health and the environment and perfectly happy to make dietary changes such as becoming vegan, vegetarian or flexitarian to achieve those aims,” Tesco’s Director of Plant-Based Innovation, Derek Sarno, said in a statement.

Tesco’s vegan sausage rolls are set to launch next week on April 22 in the bakery section.