Tesco is shutting down meat, fish, and deli counters across the UK.

Several Tesco stores in Cornwall, Burton, Devon, North Wales, and Kent have completely shut down counters or have reduced hours to only a couple of days a week. The change appears to be as a result of a lack of customer demand. “We’re making changes to our UK stores and head office to simplify what we do and how we do it, so we’re better able to meet the needs of our customers,” Tesco chief executive Jason Tarry told Cornwall Live.

Earlier this year, The Guardian reported that the change may affect 732 of the supermarket chain’s larger stores. 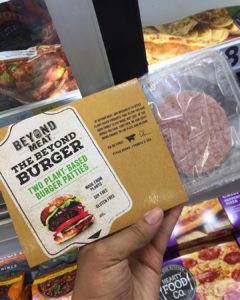 Tesco has become a leader in vegan product launches over the past year, appealing to the rising consumer demand for healthier, more sustainable food. Its own-brand vegan ready-meal range, Wicked Kitchen, launched earlier last year and soon exceeded sales projections by more than double. The Wicked Kitchen meals were given partial credit for Tesco’s revenue spike in April 2018 and by August, Tesco shoppers had purchased four million of the vegan dishes.

Following the “phenomenal” consumer response, the grocery store chain announced it would add 26 new vegan products to the range. “At the start of the year, I said that veganism was going mainstream, and – as plant-based options are taking over the supermarket shelves – that belief is fast becoming a reality,” said Wicked Kitchen creator Derek Sarno at the time.

The grocery store chain was also the first in the UK to stock the Beyond Burger, a realistic vegan burger that “bleeds” like meat, made by California-based brand Beyond Meat.

“We know from our own data that flexitarianism is on the rise and many more customers are dabbling in cutting out meat for a day or so during their weekly diet,” said Tesco product development director, Kate Ewart. Even long-standing vegetarian brands like Quorn are taking notice of the fact that vegan products are not as niche as they once were. Over the summer, the company announced it had invested £7 million into research and development to create new vegan products.