Texas is typically not associated with the vegan lifestyle, but at the Globe Life Park in Arlington, the two can co-exist. In preparation for the Texas Rangers Opening Day on March 29, 2018, the stadium announced its new food and beverage lineup, and the vegan options have hit it out of the park.

The new stadium menu offers game-day food for everyone, from self-proclaimed carnivores to vegan foodies. In today’s entertainment world, the food is an essential part of the game-watching experience, and fans are asking for more than peanuts and Cracker Jacks. In addition to the traditional giant pretzels and pre-packaged munchies, the ballpark has launched an array of over-the-top sweet and savory goodies that will last fans through the ninth inning.

Among the beef-stuffed fried pickles and deep-fried cinnamon rolls, there are two new and equally satisfying vegan items. Vegan fans can treat themselves to the Vegan Nacho Grande and wash it down with the Nitro Cold Brew Coffee. The nachos consist of a mass of tortilla chips smothered with house-made vegan chili, vegan cheese sauce, lettuce, tomato, olives, and Beyond Meat Crumbles. The coffee is from Cuvee Nitro Cold Brew Coffee, a local Texas company, and poured on draft with the option of French vanilla or hazelnut syrup and almond milk. 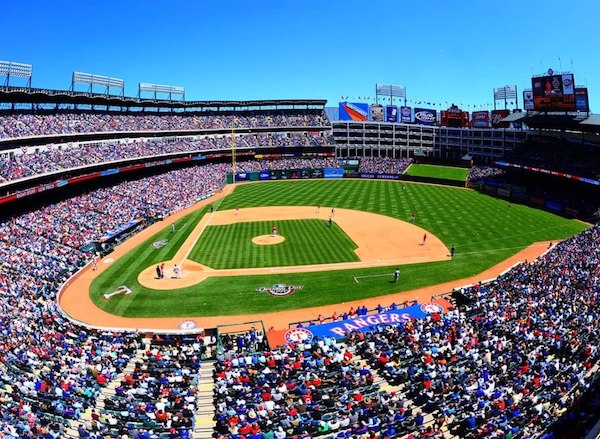 Although these specific vegan items are new, Globe Life Park has been catering to vegan fans since 2016. That same year, ballpark received recognition by PETA as the Most Vegan-Friendly Ballpark in the US following the launch of the vegan cart. The cart menu includes a vegan burger, tamales, wraps, salads, fresh fruit and veggies, and the most popular – a veggie dog with all the fixings.

In an interview with the Dallas Observer, Casey Rapp, the general manager of the park’s food and retail services, said that the cart was just a pilot program, but he soon realized, “It did well enough to keep.” True to the iconic words in the classic baseball film, “Field of Dreams,” the vegan cart proves, “If you build it, they will come.”

Ballparks across the nation are also beginning to integrate more vegan options to appease plant-based fans. Aramark, which operates food service for several MLB stadiums, recently announced more vegan options in all of its parks, and individual parks are inventing their own vegan offerings as well. Fans no longer have to sneak in baby carrots and hummus; now they can attend a game and look forward to vegan versions of monstrous cheesy nachos, foot-long hot dogs, and mile-high burgers to enjoy throughout the game.