(Updated February 2020) Vegan steak was once an oxymoron. But now, juicy, meaty, fully plant-powered slabs of steak are here, and they’re not going away anytime soon.

Data released by The Good Food Institute (GFI) and the Plant Based Foods Association (PBFA) revealed that vegan meat sales are growing 10 times faster than animal meat. This trend is evident across the board, not just for plant-based meat but for all animal-free food. The research highlighted that retail sales of vegan food in the U.S. increased 11 percent from April 2018 to April 2019. Meanwhile, the total U.S. retail food market only grew by 2 percent during the same period.

Vegan steak is particularly exciting. Whilst plant-based mince, beef patties, and sausages have been available for decades, it was only in May 2018 that vegan steak entered the supermarket scene. Vivera is the company responsible for what was marketed as the world’s first store-bought vegan steak. The product proved popular. Gert Jan Gombert, the company’s commercial manager, said the steak was “flying off the shelves.” Vivera’s first shipment of 40,000 steaks to Tesco sold out almost immediately. The demand motivated the vegan meat brand to up production to 100,000 a week. 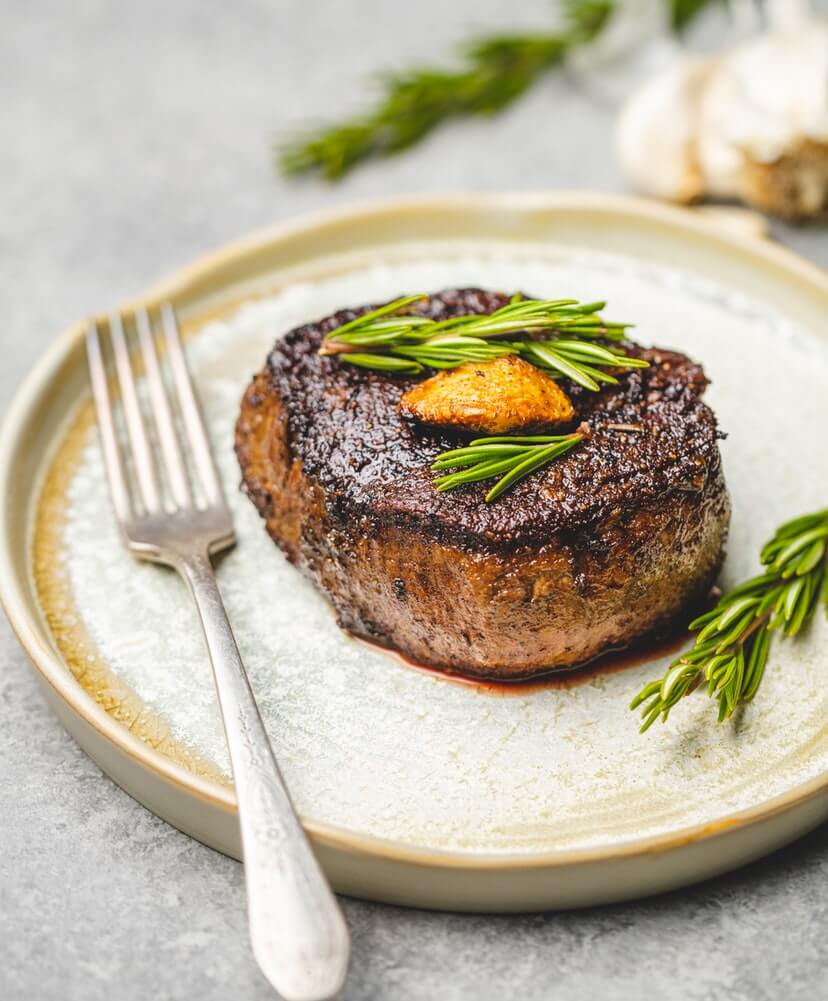 Steak is made by cutting across the muscle fibers of a cow.

A survey conducted by butcher Donald Russell in 2018 uncovered that most meat-eaters don’t know what part of an animal steak comes from. Nearly 75 percent of participants couldn’t say where a rump steak comes from on a cow (it’s made from the hindquarter and the muscle above the hip bone), and more than 80 percent weren’t aware of the source of a ribeye steak (it comes from the rib section).

Usually, steak is made by slicing across the muscle fibers of a cow. Sometimes steak includes a bone. Other variations include when the meat is sliced parallel to the fibers, like the flank steak cut from the abdominal muscles or the silver finger steak cut from the loin.

Steak impacts the planet in a multitude of ways. Beef production requires huge amounts of water compared to other foods. Environment website Water Calculator says beef “has a particularly high water footprint,” using up 1,800 gallons of water to make one pound of beef. “On average, the water footprint of a vegan or vegetarian is around half that of a meat-eater,” Water Calculator says.

The most comprehensive analysis of farming’s impact on the planet found that the production of beef uses up 36 times more land and generates six times more greenhouse gas emissions than the production of peas. The analysis, which was conducted by Oxford University researchers, concluded that going vegan is “the single biggest way to reduce your impact on planet Earth.”

Grass-fed beef still hurts the planet more than plant-based food. “Converting grass into [meat] is like converting coal to energy. It comes with an immense cost in emissions,” Joseph Poore, who led the study, said.

Vivera’s vegan steak is made with soy, wheat, and potato protein. | Vivera

What Is Vegan Steak Made From?

There has been some debate about whether vegan meat should be allowed to use labels like steak, sausage, and burger. Most of the pressure to tighten labeling laws has come from meat producers. The National Farmers’ Federation, an Australian organization that represents farmers and the agricultural sector, has campaigned for “honest” labeling, arguing that meat-like names for plant-based products are misleading for consumers.

However, research shows most people understand that when they purchase vegan steak, they’re buying the meat-free version. Specialist PR agency Ingredient Communications reported that 75 percent of people believe vegan products should be able to use the same terms as their meat-based counterparts. 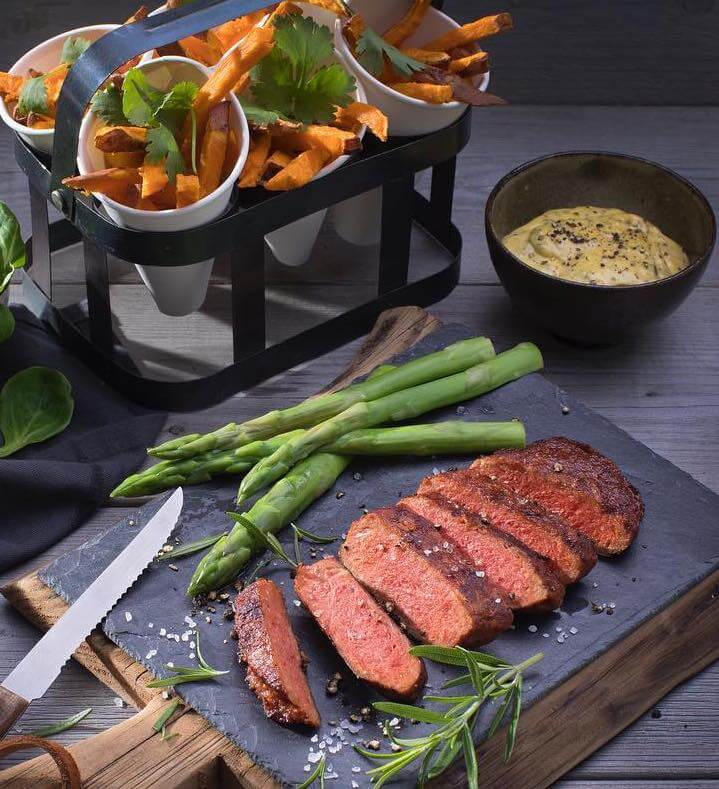 In June, Vivera Foodgroup — which owned three plant-based companies including Vivera, as well as a meat company called Encko — announced it had sold Encko. The move made it one of the first companies in the world’s meat industry to ditch meat completely from its lineup.

Vivera uses mushroom, coconut oil, sunflower oil, beetroot, and potato soy, and wheat protein to make its steak. The item contains 18 grams of protein, as well as iron and vitamin B12. 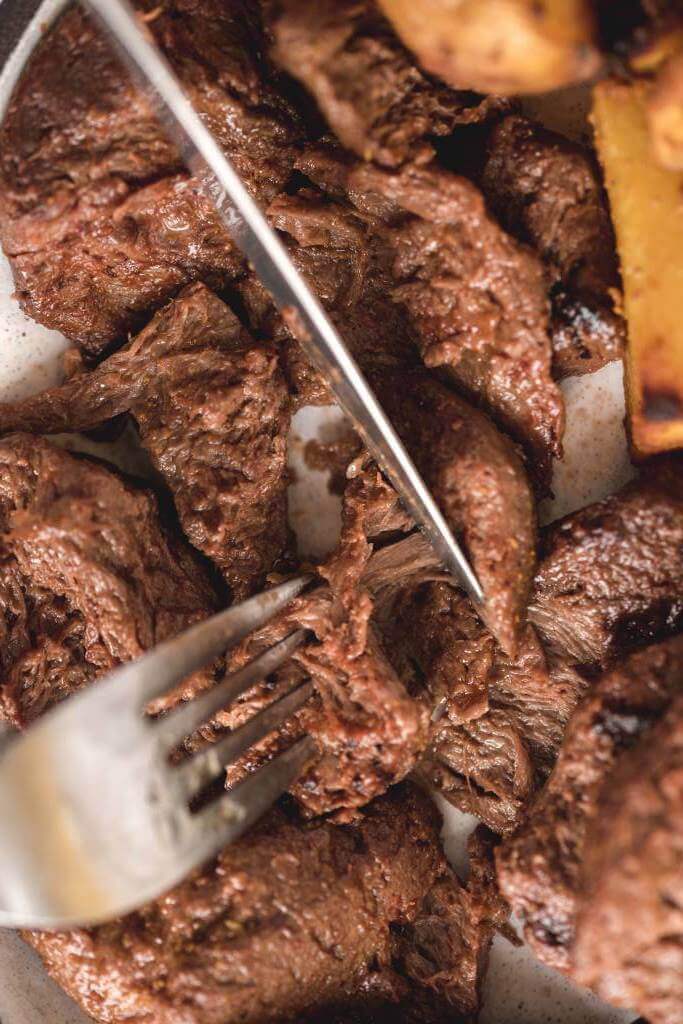 Harmless Foods describes its vegan steak as soft, juicy, and tender – “Like meat – just kinder.” The plant-based sliced steak is gluten-free, contains more than 15 grams of protein, and offers 30 grams of fiber. The company — which doesn’t use palm oil due to its environmental impact — uses soy protein, tomato sauce, onion, garlic, and oregano in its plant-based steak recipe. 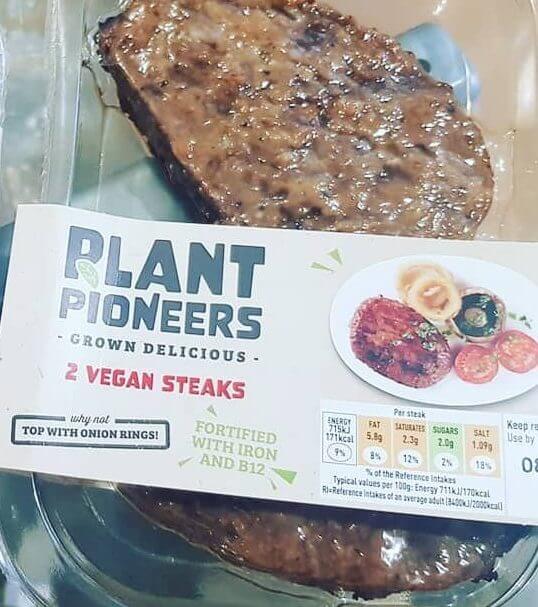 The latest arrival on the vegan steak scene is Plant Pioneers. This mystery brand recently appeared at major British supermarket chain Sainsbury’s, selling vegan steak, shroomballs, and plant-based bacon. The steaks are made out of mushrooms, coconut milk, and wheat gluten and they’re fortified with iron and vitamin B12. Not much is known about Plant Pioneers; the company has no website or social media, but we’ll be keeping an eye on this one.

This vegan steak “melts in your mouth.” | Rügenwalder Mühle

Earlier this year, a German meat company called Rügenwalder Mühle expanded its range with three new vegan products: chicken filet, chicken cold cuts, and (you guessed it), steak. The steak is made with soy, wheat, and pea protein. Beetroot, carrot, and radish give the steak its color.

The steak can be grilled or fried and is ready in just 5 minutes. Rügenwalder Mühle says its steak is “crispy on the outside, pink on the inside, and so tender that it will melt in your mouth.” 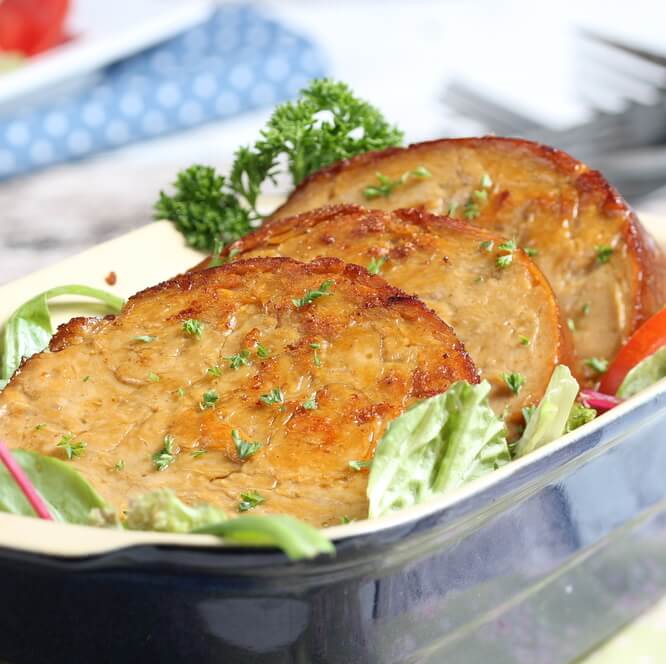 Where do you get your protein? Wheaty’s vegan steak, that’s where. This product contains nearly 34 grams of protein per 100 grams (a traditional steak has around 25 grams). The certified organic steak is made from seitan, which gets its smoky flavor from natural beech wood. 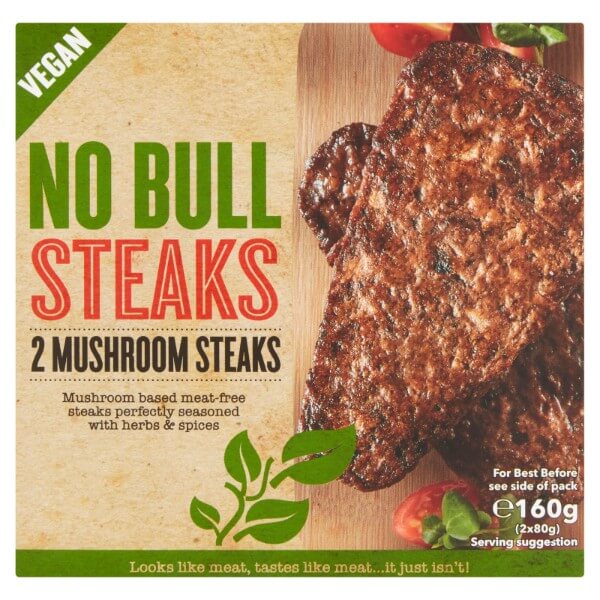 Iceland recently added Mushroom Steaks to its No Bull range of vegan meat. Made with 75 percent mushrooms, tomato paste, and sunflower oil, the vegan steaks look, cook, and taste similar to their meaty counterpart. The UK supermarket chain also offers No Bull Steak-Style Burgers, which are made with wheat protein and mushrooms. 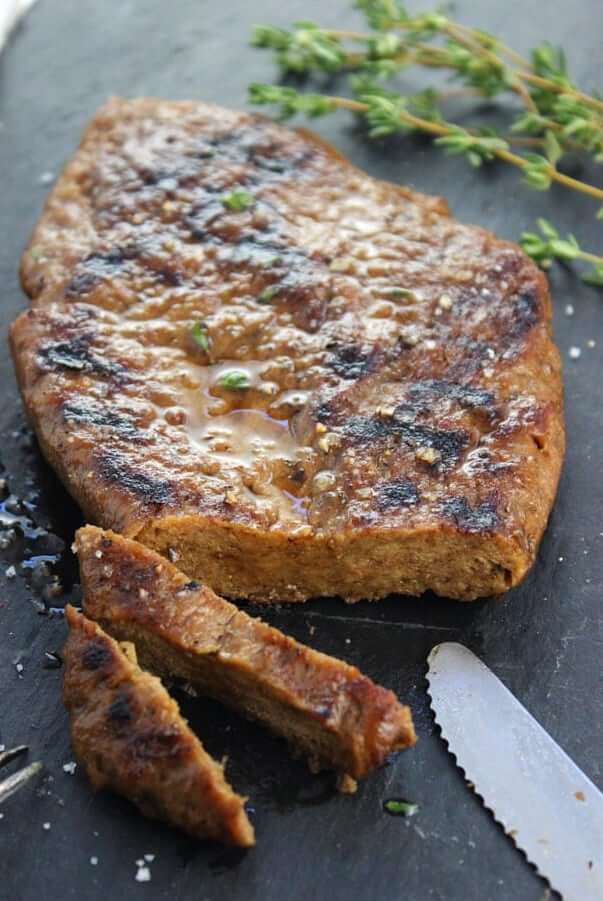 This vegan seitan steak is packed with protein. | It Doesn’t Taste Like Chicken

Seitan, made from vital wheat gluten, is sure to bring you the sizzly, steaky goodness you’ve been looking for. This vegan steak contains 5 grams of fiber and 42 grams of protein, so the next time you’re asked about your protein intake, just share this recipe. 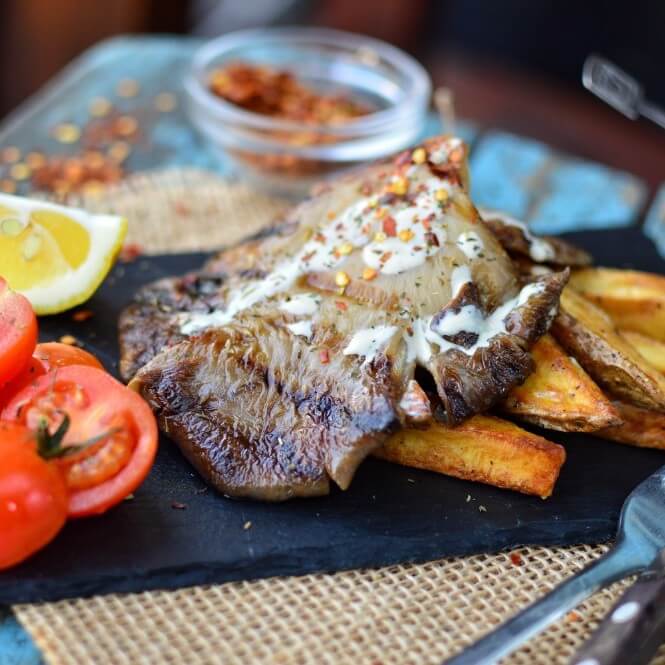 Did you know mushroom makes for a great vegan steak? | Plant-Based on a Budget

Let’s go back to the basics. By bringing together one large oyster mushroom and a bit of kitchen magic, this recipe delivers a healthy, chewy vegan steak that rivals the original. 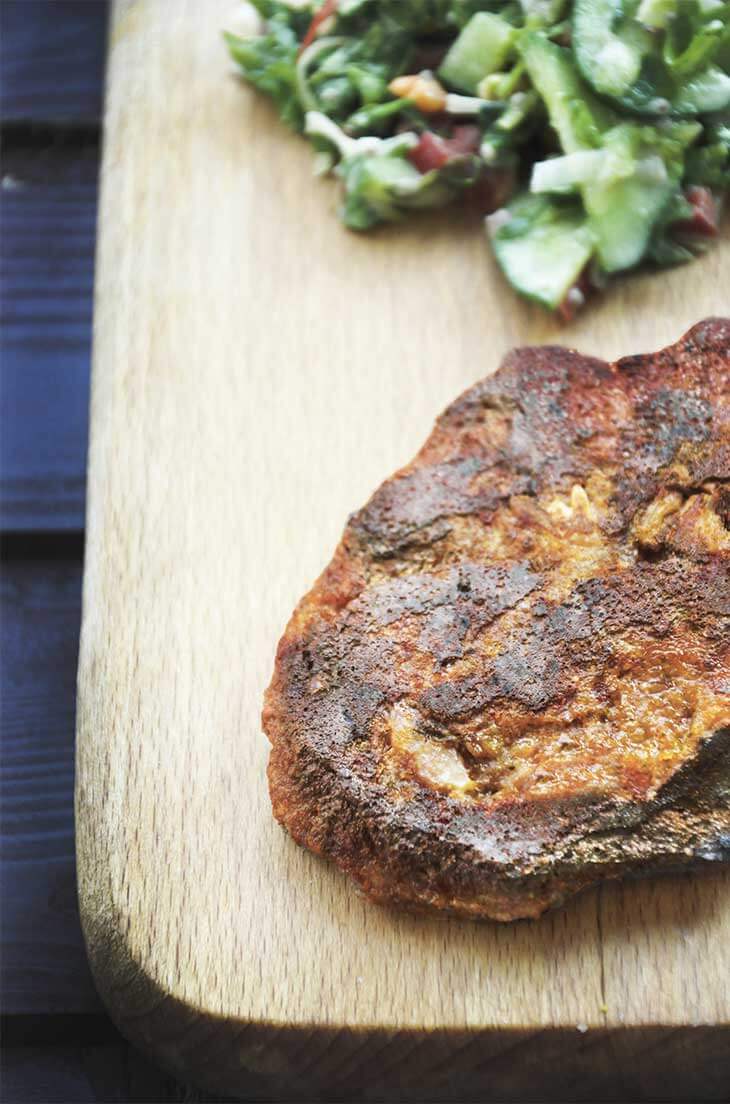 Who knew you could make a meat-free steak out of mushrooms, pasta, and barbecue sauce? This recipe will have your dinner party guests triple-checking that it’s not meat. 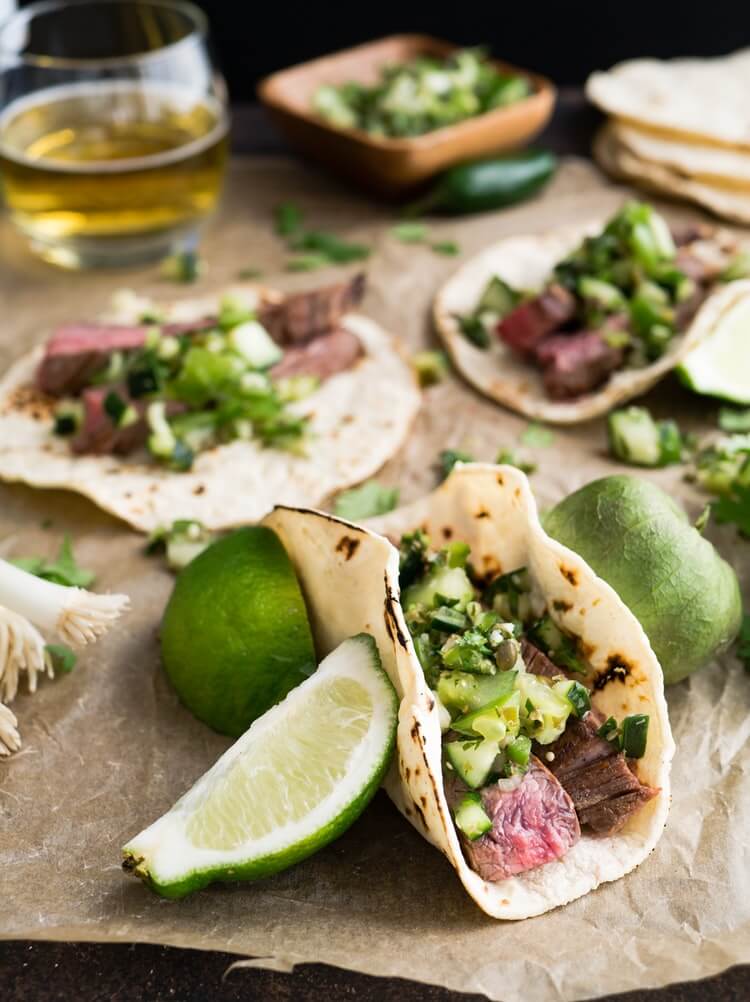 You can make vegan steak strips out of lentils and oats.

Whole foods are all the rage right now. Go for these plant-based steak strips if you’re trying to avoid processed foods. They’re made out of lentils, brown rice, and oats. The recipe includes vegan egg, but you can also use pumpkin puree if you prefer. 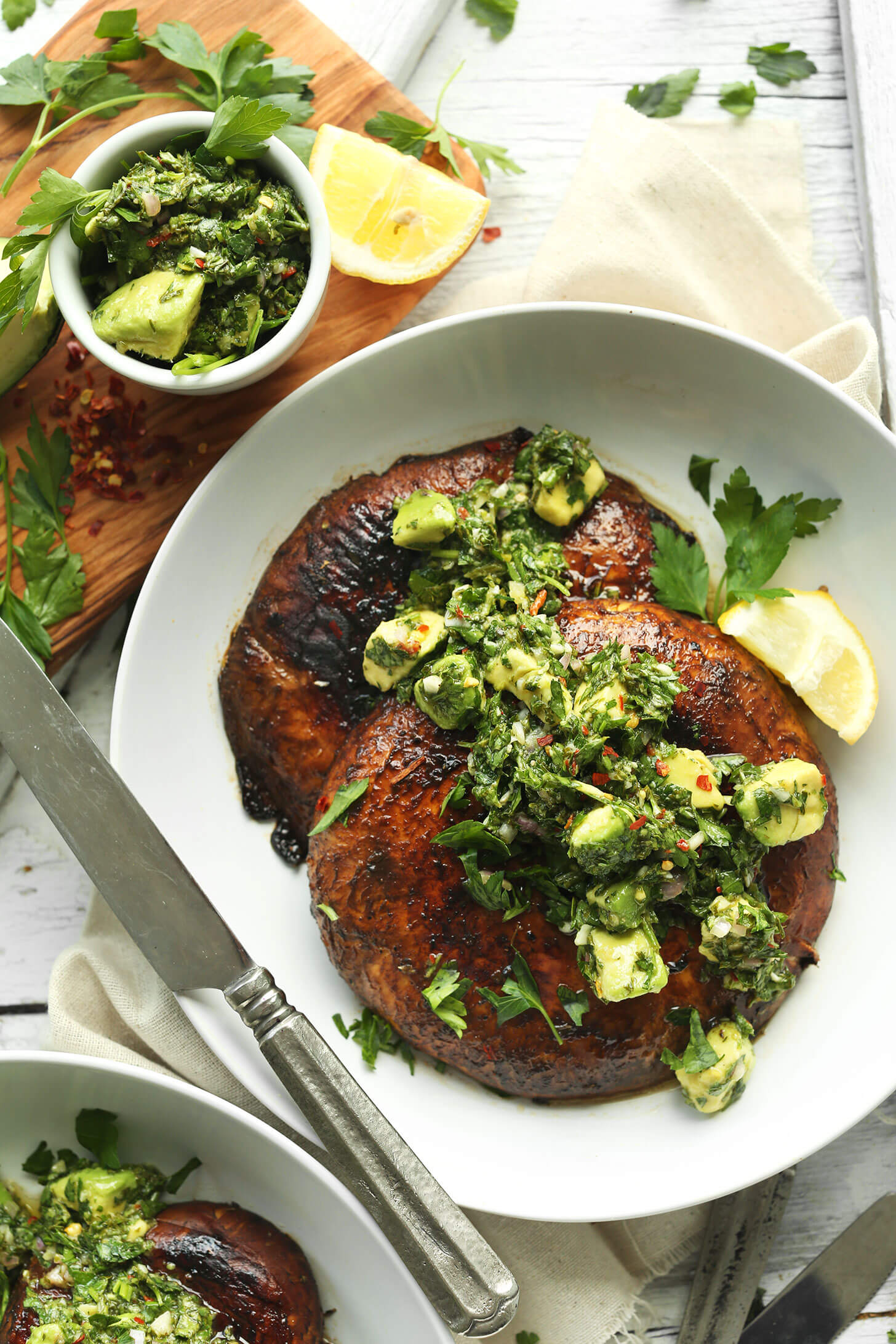 Try these vegan mushroom steaks at your next dinner party. | Minimalist Baker

You’ll be the talk of the town once you whip these meat-free steaks up. They’re described by the recipe creator as hearty, flavorful, herby, and buttery. This meal is topped with avocado chimichurri and it can be made start-to-finish in less than 30 minutes.