Cyprus’ history is long and varied. The island has seen many different civilizations come and go, from the Greeks to the Ottomans.

Originally the island was settled by the Greeks but was “ruled in turn by the Assyrians, Egyptians and Persians” according to Lonely Planet. However, over its long history, it has also been conquered by rulers such as Alexander the Great and Richard the Lionheart.

More recently, Cyprus declared independence from Britain in 1960 and became the Republic of Cyprus. As described by Lonely Planet, the “transition from colony to an independent nation was not without growing pains.”

Ultimately, the island was divided into two, by what is still known as “the green line.” The division remains to this day, but talks to unify the two sides of the island have increased since setbacks in the early 2000’s.

Naturally, each period of history left its mark and today Cyprus is a melting pot of traditions and cultures. Thanks to a booming tourist industry, the island is a popular holiday destination for travelers from all over the world. 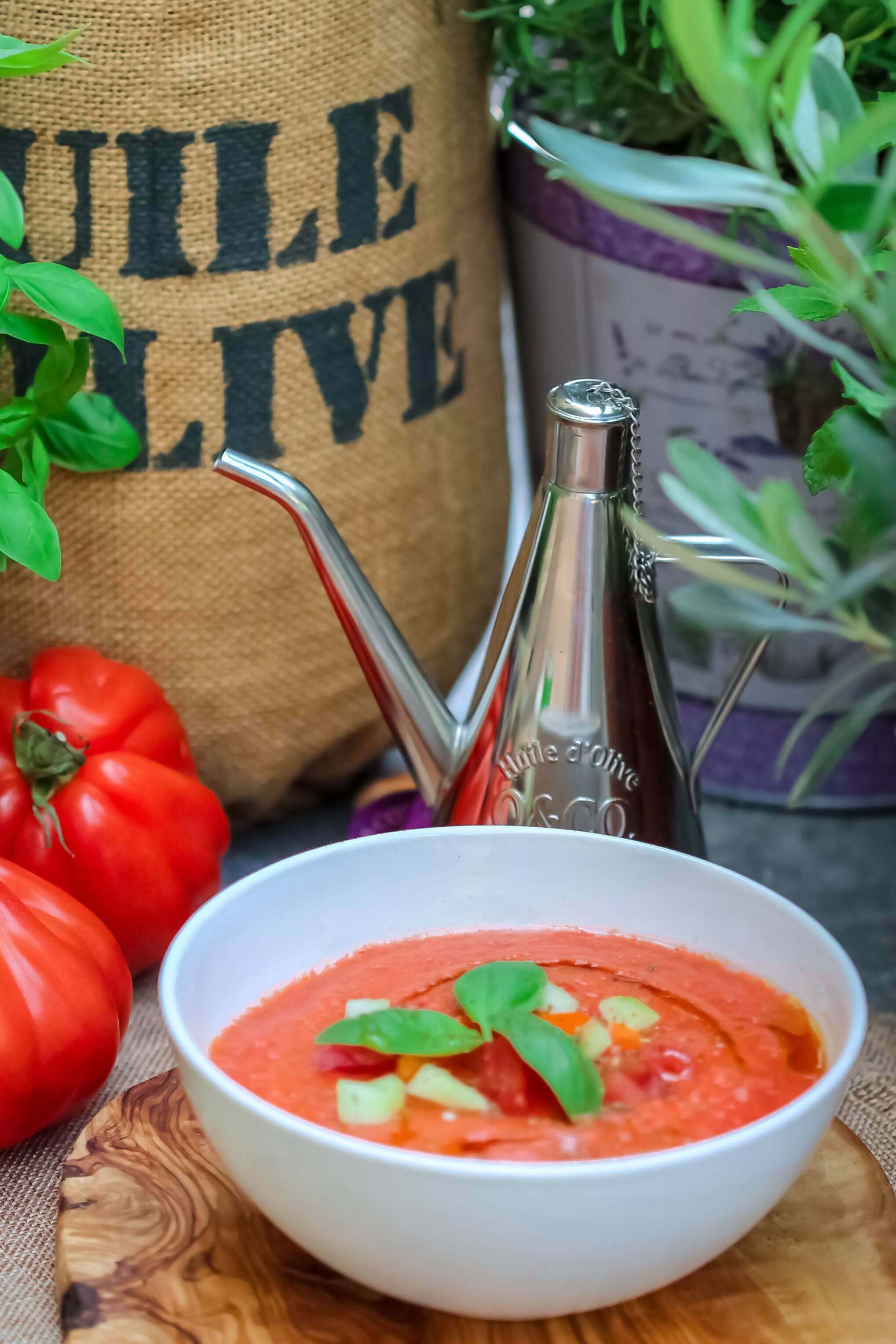 The Mediterranean diet is widely recognised as the healthiest

The traditional Mediterranean diet has often been named the healthiest diet in the world, due to its variety. Southern European food is commonly characterized by a wide range of vegetables, fruits, legumes, nuts, beans, cereals, grains and unsaturated fats such as olive oil.

The Mayo Clinic characterizes the diet as based on the following principles, amongst others:

Research has shown that this combination can lead to a reduced risk of heart disease and cardiovascular mortality. The diet has also been associated with a reduction in cancer, Parkinson’s and Alzheimer’s risk.

Though each Mediterranean country has its own specialties, many dishes are common across the Mediterranean basin. Those familiar with Greek cuisine can often find variations of dishes in different countries. For example, Greek dolmades or stuffed vine leaves, are known as yaprak sarması in Turkey, or koupepia in Cyprus.

Although the Greek and Cypriot diets often contain a lot of meat or cheese there are traditional dishes that are already vegan-friendly. 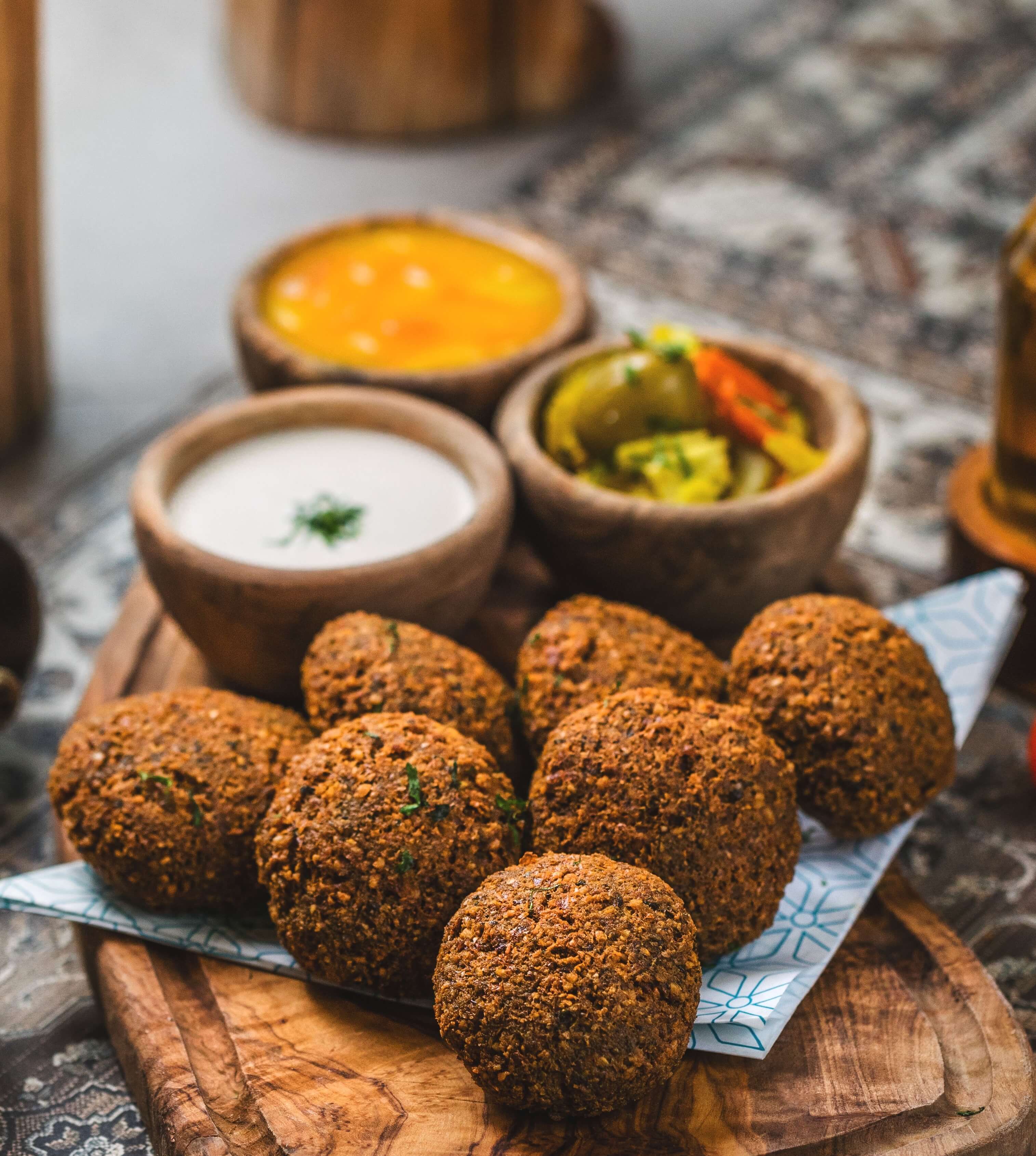 Freshly made falafel isn’t the only vegan food in Cyprus

Briam – this tomato-based dish could be compared to a French Ratatouille, with one big addition. The dish also includes sliced potatoes, which take it from being an accompaniment to a main meal all on its own! According to My Greek Dish, it is counted as a “Ladera” dish, meaning it is “prepared only with olive oil, with no addition of other fat.”

Dolmades – As mentioned, this dish is common across the basin, in countries like Greece, Cyprus, and Turkey. Usually made with vine leaves and stuffed with rice and herbs, it comes in many forms. Some do contain ground mince, so be sure to check you are ordering the veggie version.

Kolokithakia Yemista – According to Cyprus Alive, this version of stuffed vegetables (usually tomatoes and peppers) uses courgette flowers and specifically originates from Cyprus. Often made with a similar filling to dolmades, the gently flavored rice includes lemon zest which adds another element to the delicate dish.

Hummus – Celebrated the world over by vegans, you are likely to find hummus on every menu you order from in Cyprus. Made from the humble chickpea, paired with warm pita bread this dip is a key player in mezze platters.

Falafel – Another dish based on chickpeas, falafel are disliked by some as they can be dry. However, a freshly made falafel from any Cypriot restaurant or cafe is often considered the epitome of the snack.

Melitzanosalata – Also known as Baba Ghanoush in other parts of the Mediterranean, this dip is another feature of mezze platters. Made by roasting eggplant (aubergine) and blending with tahini, it is often served drizzled with olive oil and pomegranate seeds which add an element of extra sweetness.

Legumes – Fresh beans and legumes are abundant in Cyprus and many dishes feature legumes. They are often boiled or steamed and served in salads or on their own with a rich tomato sauce.

Louvi – Otherwise known as black-eyed beans, the author of Yummy Cyprus recalls how preparing this dish was a family activity. The beans are “high in protein, low in fat and a great source of vitamins, calcium and folate.”

Fasolada – Another dish based around legumes, Fasoláda or Fasoulada is hearty white bean soup. According to 196 Flavours, the soup “was served as a sacrifice to Greek god Apollo at the Pyanopsia festival, which literally means ‘day of bean soup’.”

For those with a sweet tooth, dessert usually centers around fresh fruit or fruit soaked in syrup. However, those looking for traditional sweets may be able to find Loukoumi — otherwise known as Turkish Delight — which is traditionally made using just water, starch and sugar.

Other sweet options include Gliko, a sweet preserve made by soaking fruit and nuts in sugar syrup. According to Cyprus for Travellers, “the name of this dessert is translated from Greek as ‘sweetness in the spoon‘.” 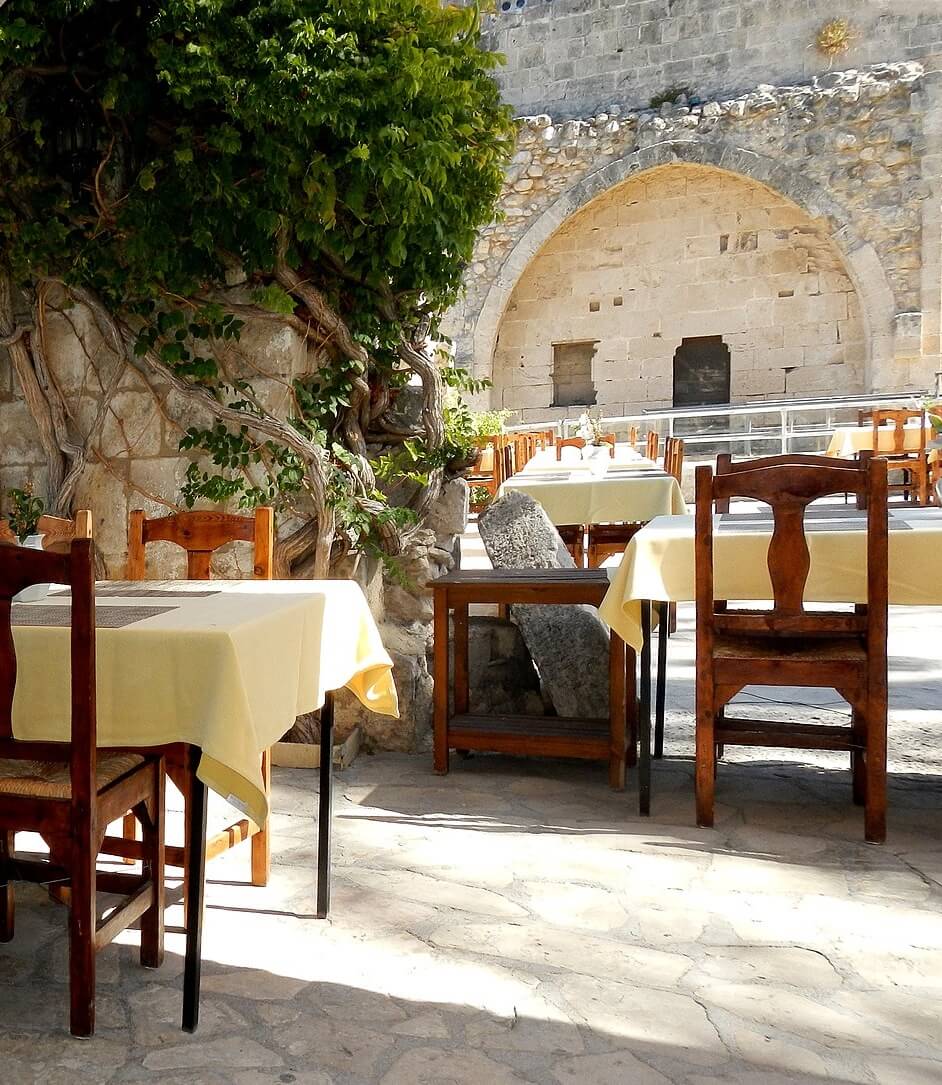 The general advice for eating as a vegan in Cyprus is to explain what you don’t eat, instead of just saying you are vegan. As most Cypriots eat a lot of meat, visitors may encounter blank faces at the word vegan.

Currently, the highest rated vegetarian and vegan restaurant in Cyprus is located in the bustling city of Nicosia.

Inga’s Veggie Heaven, run by Icelandic expatriates, caters to vegans and vegetarians alike with a wide range of dishes to choose from.

According to the website One Arab Vegan, the restaurant is located in the back streets of the city but is “well worth the walk“. With a daily changing menu, diners can often choose from anything from vegan moussaka to veggie burgers and nut roasts.

The restaurant’s Facebook page states that all dishes are served with salad, homemade bread, and hummus.

Most restaurants will offer vegan- and vegetarian-friendly options, as many traditional dishes are already free of animal products. However, there are social media groups that offer advice and tips on where to go, so you don’t just have to eat hummus all holiday!

One such group is Cyprus Vegans and Vegetarians on Facebook. It describes itself as “A place for Vegetarians and Vegans in Cyprus to connect.” Posts from members include photos of delicious vegan food that can be found around the island.

In today’s world, social media can provide as much information as the internet itself. Hashtags on Twitter and Instagram, such as #cyprusvegan show many smaller businesses promoting their vegan offerings. 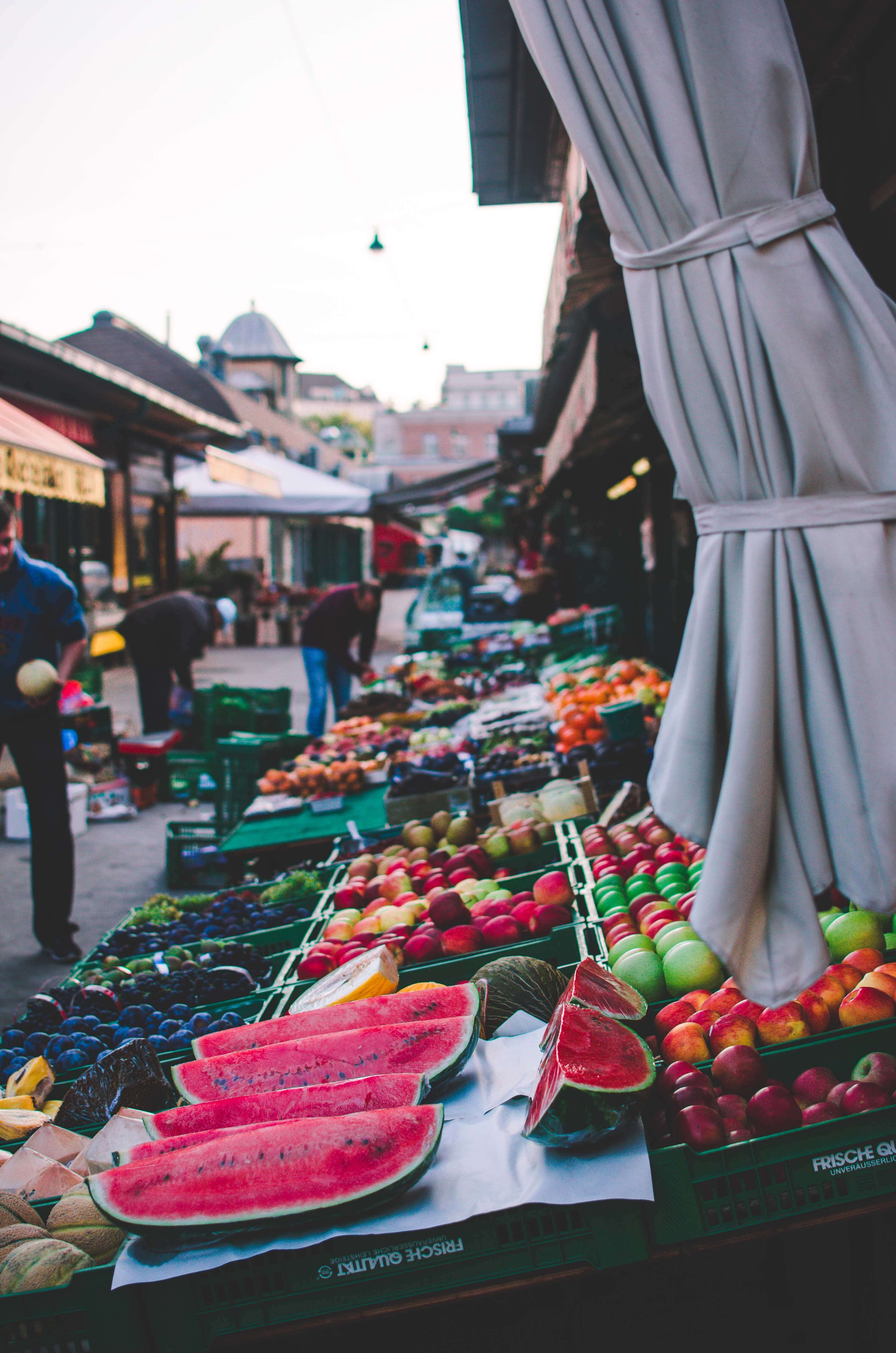 Most towns and cities will have their own fresh produce markets

Depending on where you stay on the island, and when you are staying there are many different markets to choose from. Anyone looking for fresh produce whilst in Cyprus should always check local farmer’s markets.

Most large cities will have farmer’s markets, which are a treat to visit even if you don’t plan on buying anything. It’s worth checking before you go as some markets are only open at weekends, others every day of the week.

As well as multiple farmer’s markets, there are also flea or vintage markets. Nicosia, Paphos, and Limassol all have options to browse and sell everything from jewelry to garden equipment. 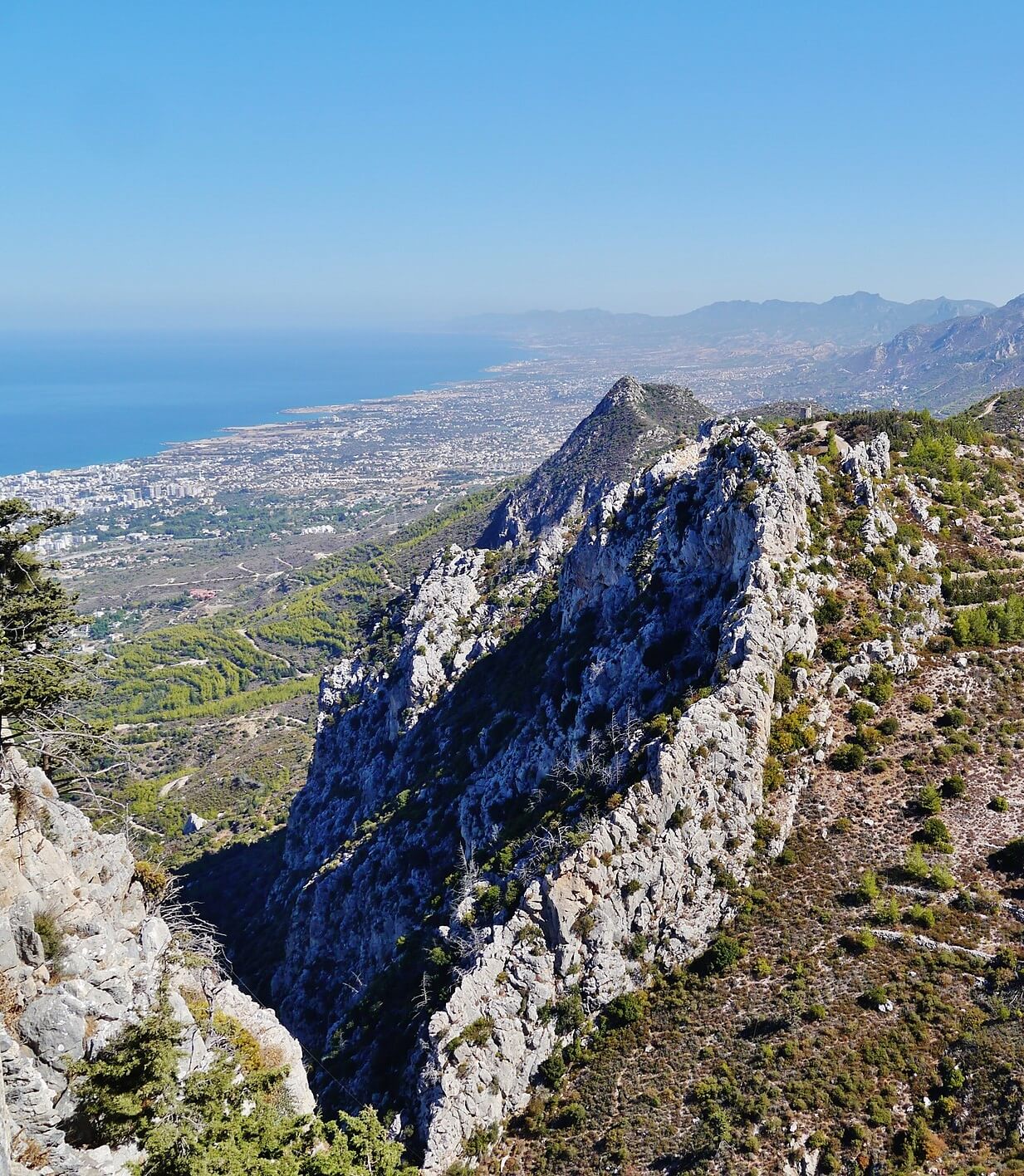 Due to its history, Cyprus is awash with ancient ruins.

For those looking for great views, Ancient Kourion tops the list. As with most ancient sites, Kourion is huge. If you are looking for the highlights, the theater, and House of Eustolios host some fantastically-preserved mosaics.

Another option for views as far as the eye can see, a climb up to the top of St Hilarion Castle provides a great viewpoint of most of the island.

The largest mix of Cyprus’ invaders’ history can be seen at Ancient Salamis. Visitors can see evidence of Hellenistic, Christian and Byzantine influence at the site, which is an easy day trip from Nicosia.

For those looking for food-based activities (aside from gorging on the amazing local produce), One Arab Vegan describes a vegan food tour of Nicosia. Run by Cyprus Taste Tours, the company is more than happy to accommodate for vegan food tours of Nicosia. 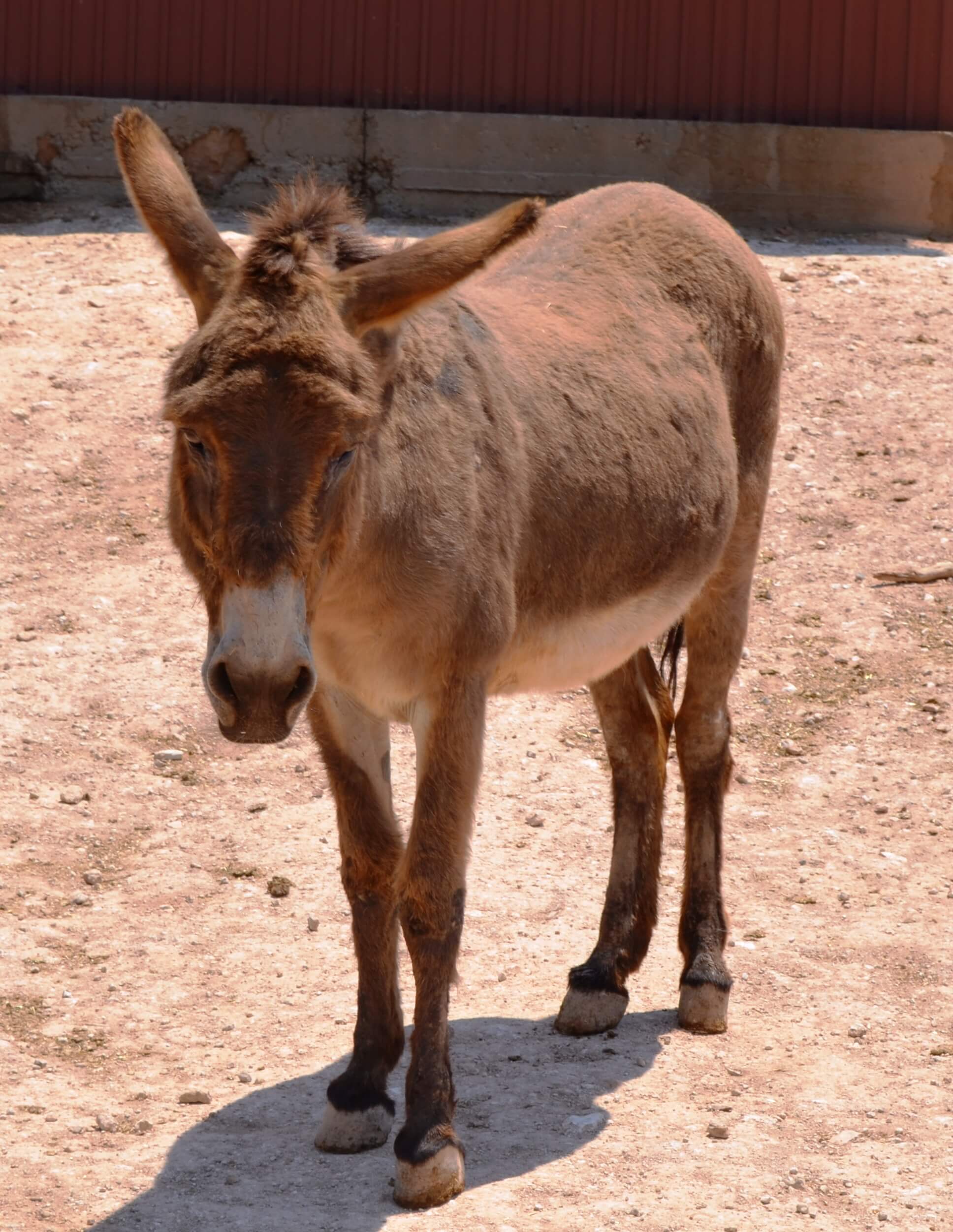 The island has many animal shelters, including a donkey sanctuary | Image/The Donkey Sanctuary

It’s not worth talking about Cyprus, without mentioning the numerous sanctuaries and animal shelters on the island.

The Cyprus Mail estimated last year that the number of stray dogs is “between 200,000 and 250,000.” As a result, the government’s policy is usually to have local authorities catch and euthanize stray animals.

However, last year a new method was proposed as an alternative. The “Trap, Neuter, Return” (TNR) method saw success in countries like the UK and Denmark and bypasses the need to punish animals for their owners’ mistakes.

The programme has also been successful in its implementation to control the stray cat population on the island.

Due to high numbers of stray cats and dogs, there are various shelters dedicated to finding the original owners or new forever homes for animals.

One such is the Argos Sanctuary, which currently looks after around 300 abused or abandoned cats and dogs. Its website states “we believe that every animal has the right to a happy and healthy life full of love.”

It works with the local community to provide help with rehoming for unwanted animals and investigates animal abuse reports. The shelter also provides boarding facilities for domestic animals.

The shelter was chosen as the host of The Dogs Trust Annual International Companion Animal Welfare Conference at the end of last year. Visitors to the conference included Battersea Dogs Home vet, Shaun Opperman, and canine advocate Paul O’Grady.

Another shelter on the island is the Cypriot branch of The Donkey Sanctuary, a subsidiary of the charity founded by Dr Elizabeth Svendsen in 1969.

The sanctuary provides a “permanent, caring home to unwanted, neglected and mistreated donkeys and mules in Cyprus.”

Sadly, due to fire and escalating operating costs, it no longer operates a Visitor’s Centre. However, the charity is always willing to welcome people to its offices in Pano Kivides, near Limassol.

The sanctuary also works on its outreach programme, providing free veterinary care to animals still working on local farms. As well as healthcare, workers also provide advice to donkey owners and rescue animals that are too old to continue working. 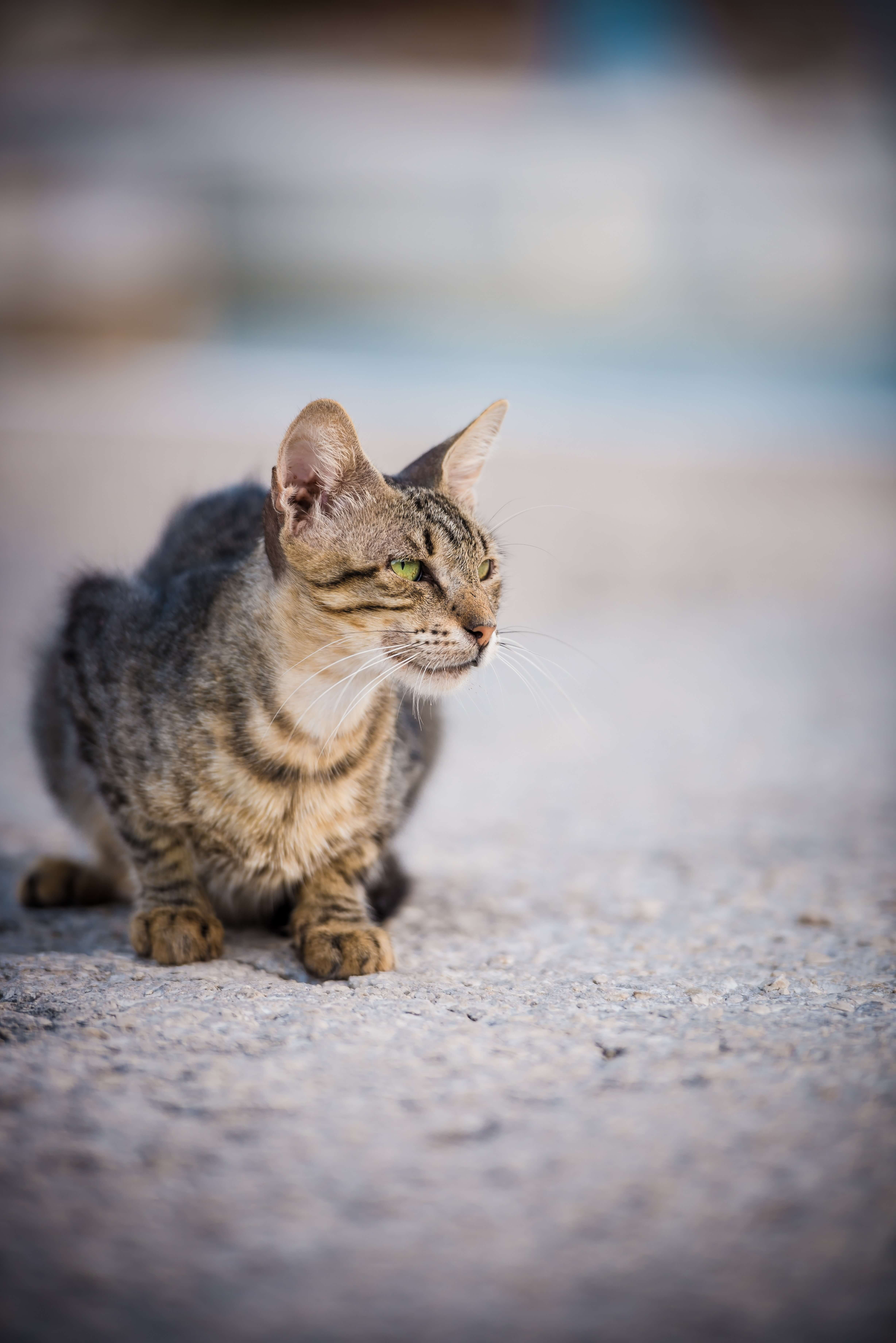 Almost all shelters across the island offer opportunities for adoption. Due to the exceptional number of stray cats and dogs, these are the animals most commonly up for adoption.

Though different regulations exist for adoption in different EU countries, many sanctuaries are well equipped to help visitors adopt animals and take them home.

One such shelter is Saving Pound Dogs Cyprus (SPDC). Though significantly smaller than similar organizations — it currently homes about 30 dogs — the shelter managed to rehome around 1500 dogs between 2013 and 2015. Its work continues today, with the owners working to find forever homes for dogs in Britain and across the EU.

The Donkey Sanctuary offers a different type of adoption — closer to sponsorship. Sponsorship of specific donkeys is just €24 per year and the money goes towards caring for the animals.

There is plenty to do in Cyprus, and visitors will be spoilt for choice when it comes to vegan food. It could just be the perfect place for your next summer holiday.