The center—located in Kemujan, Karimun Jawa—was constructed by the Central Jakarta Forestry Department, the Jakarta Animal Aid Network, and the Dolphin Project in 2011. The latter, a nonprofit dedicated to the protection of dolphins, runs the center.

For 10 years, O’Barry worked in the dolphin captivity industry. He trained the five dolphins who appeared in “Flipper,” a 1960s TV series about two kids and their pet dolphin. After one of those dolphins died in his arms, he had a change of heart. In the years since he has devoted his life to the protection of dolphins and lobbied against captivity.

While making “The Cove,” O’Barry worked with filmmaker Louis Psihoyos and the Ocean Preservation Society to expose dolphin capture and slaughter in Taiji, Japan. 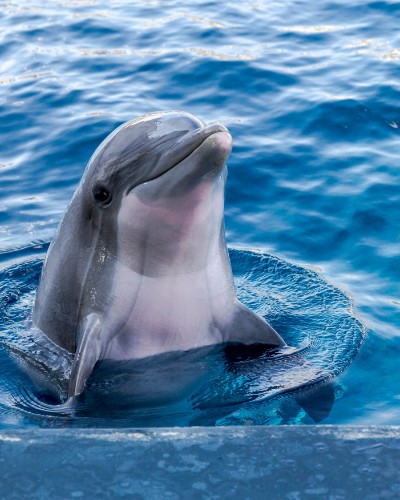 Around 3,000 dolphins live in captivity.

Another Chance at Life

Through Camp Lumba Lumba and the Bali Dolphin Sanctuary, O’Barry and the Dolphin Project are helping to give captive dolphins another chance at life.

First, the Dolphin Project takes confiscated captive dolphins to the Bali Dolphin Sanctuary. They recuperate at the sanctuary while experts assess their overall health and wellbeing.

If they are a candidate for rehabilitation, they move to Camp Lumba Lumba. If not, they remain at the sanctuary to live out the rest of their days peacefully.

Femke Den Haas, the Dolphin Project’s Indonesian coordinator, runs Camp Lumba Lumba. He told Reuters: “often they switch off the sonar when they are kept in captivity, so that’s one of the main tasks of the team here to prepare them for their lives in the wild.”

Currently, there are more than 3,000 dolphins in captivity globally. According to O’Barry, the Dolphin Project is hoping to build more rehabilitation centers and sanctuaries around the world. He said: “It’s a model. It can be duplicated. And we’re trying to do that in Europe as well, in Italy and in Crete.”