Vegans, we have a problem. We’re insulting each other, we’re alienating each other, we’re destroying each other’s businesses and reputations, and we’re playing right into the hands of the animal exploitation industry. To paraphrase a line from one of my favorite television Presidents (Jed Bartlett of The West Wing), we’re eating our young. And if we don’t get our act together soon, this movement we’re all passionately fighting for will never make the impact we crave or the change the animals need.

For those of you who were lucky enough to miss out on 2018’s burger-induced vegan community meltdown, here’s the basic story. Impossible Foods debuted their plant-based burger patty that many consumers consider to be the closest imitation of a cow-based patty. The smell, the texture, the juiciness…it’s so beef-like, many vegans are too creeped out to even try it. According to Impossible Foods, the Impossible Burger uses 1/20 the land, requires 1/4 the water, and produces 1/8 the greenhouse gas emissions compared to its cow-based counterpart. For those of us who like plant-based meats, it was a dream come true, right?

But then came the news that Impossible Foods’ proprietary “heme”, the groundbreaking ingredient that gives the burgers their beefy flavor, was tested on animals. Rats, to be specific. Because this newly developed ingredient hadn’t previously been used in food, Impossible Foods agreed to participate in animal testing in hopes of earning official approval from the Food and Drug Administration (FDA). From what I understand, the testing wasn’t legally mandated, but had the potential to make a big difference in terms of distribution approvals.

Cue the internet outrage. Not one day of outrage, this was months of battles taking place in comments sections across the vegan cyber world. The Chicago Vegans Facebook group damn near collapsed into itself like a dying star. I watched vegan icons be smeared for daring to post a photo of themselves eating the Impossible Burger. I saw people defriend one another for coming to a different conclusion on the issue than they did. I personally lost quite a few followers (some of whom left very unkind farewell messages) after mentioning the burger on my Instagram story. 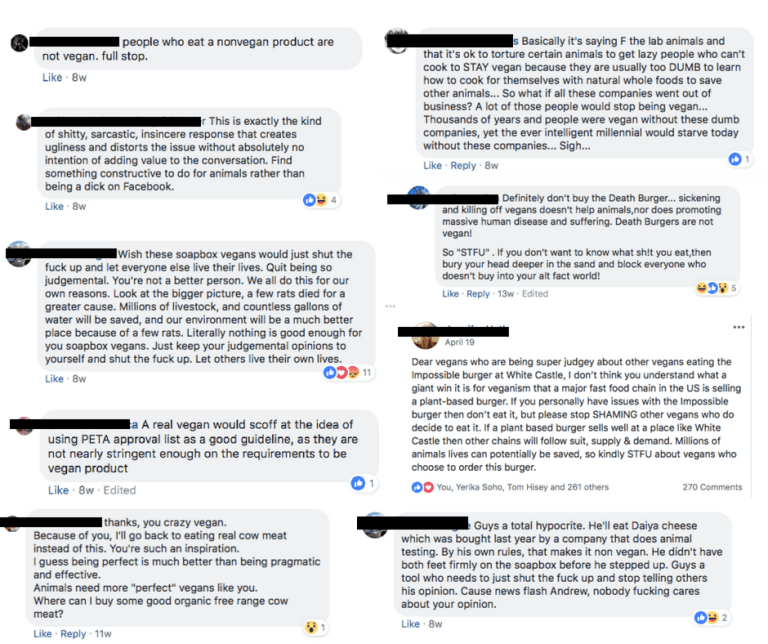 Just one example of vegans arguing with vegans over the Impossible burger.

And these are the people who are supposed to be on the SAME TEAM. The people getting sucked into these rage fests didn’t seem to respect or even acknowledge that they all felt as passionately as they did because of a shared love of animals. The pro-burger side was outraged that the anti-burger side couldn’t seem to appreciate the end goal of potentially saving billions of cows with a revolutionary plant-based patty. The anti-burger side was outraged that people who typically boycott products tested on animals were bending their ethics for this one item.

Meanwhile, as vegans spent weeks hurling insults at other vegans (making sure to end every conversation with, “don’t you dare call yourself a vegan!”), cattle transport trucks continued to transport victims to the slaughterhouse. Dairy cows had their newborn babies ripped away. Millions of dogs, cats, rats, and other animals were injected with chemicals and tested on in excruciating ways. The industrial animal exploitation machine didn’t just turn off because we happened to be distracted. In fact, it’s my very strong assumption that our infighting was exactly what cattle farmers dream of.

Personally, I have eaten and will continue to eat the Impossible Burger. I often lean more towards the “ends justify the means” side of the philosophical spectrum, and for me, this falls into that category. Pat Brown, Impossible Foods’ founder and CEO, has been vegetarian for four decades and vegan (if the vegan police are still letting him call himself that) for 14 years. I’ve read his statement on the issue, and while I still have no idea what I would have done in his situation, I fully understand how he arrived at the difficult conclusion that he needed to allow the testing. Just like I understand how my friends who run other big name plant-based food companies repeatedly paid for and consumed animal products for comparison’s sake while developing their plant-based alternatives. Yes, these vegan entrepreneurs and chefs take bites of real chicken flesh and real chicken eggs in the process of perfecting their vegan counterparts. And no, I won’t tell you who those people or companies are, because I don’t want to send the vegan army after them.

I also understand and empathize with the animal advocates who don’t want to support Impossible Foods. I know their reasoning comes from an opposition to animal cruelty, and I of course share that opposition. I actually welcome people who disagree with me yet want to discuss the issue civilly, in the way that people working towards the same end goal are supposed to do.

Unfortunately, it seems I’m in the minority on this. Vocal vegans seem willing and sometimes even happy to tear one another apart in a never-ending game of “who’s the most vegan?” While I guess this makes our egos feel better, I’m not sure how it helps the animals. My strong fear is that unless we tackle this insidious in-fighting now, we won’t be prepared for the inevitable dilemmas ahead.

I imagine the next battle will be over lab-grown “clean meats”, once they actually come to market. There are numerous companies working on this technology, and as I understand it, some animal cells may still be required to initiate the growth process. Just For All (previously known as Hampton Creek Foods), claims their lab-grown meat can be harvested from feathers that naturally fall off of healthy, happy chickens. Mosa Meats, a pioneer in the industry, has struggled to move past the use of fetal bovine serum. Fetal bovine serum has to be harvested from an unborn calf; obviously, this would require animal slaughter. In any case, the technology as it stands seems to still rely on the use of animals, either dead or alive. 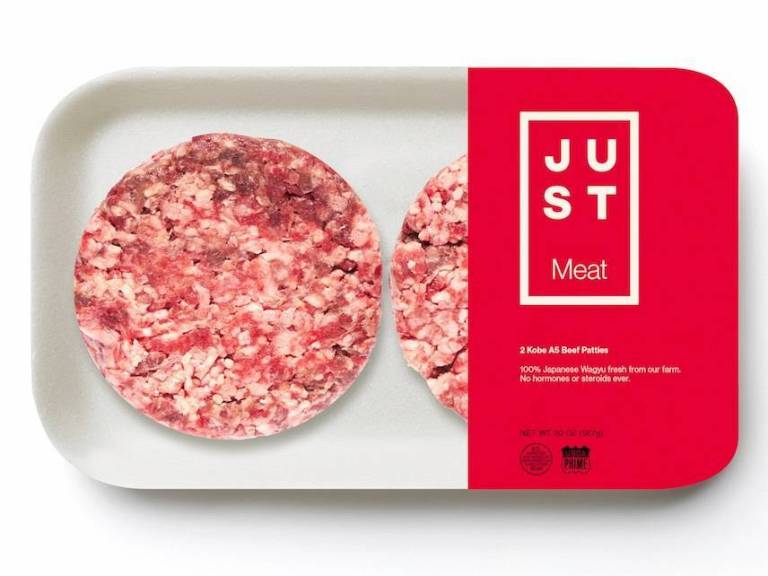 Leaders in the vegan community are already starting to develop varying opinions on the subject. Most are supportive, but skeptical– which is basically how I’d describe my stance. I often say that any industry that exploits animals for profit will eventually abuse them (hence, why I don’t eat or wear any animal products), but is that true if the industry is run by genuine animal advocates?

Ethics are tricky, and these issues are going to become increasingly more complex. In addition to the lab-grown meat controversy, we’re inevitably going to face other debates. McDonalds, a corporation most vegans despise, will undoubtedly eventually release vegan burgers in the United States (they’ve already launched the McVegan burger in Europe). Vegans who purchase it in order to support the distribution of affordable cruelty-free food will certainly be chastised for supporting an evil empire. Vegans who boycott it will be insulted and degraded for failing to understand economics. Friendships will end, fights will go on, and we’ll lose focus all over again.

That is, unless we get a grip on ourselves. Unless we remind ourselves during every one of these new ethical dilemmas that regardless of our tactics, we are all on the same side. We’re all fighting this fight because we abhor suffering and needless violence, and we’re trying to create a world without those things. As the vegan community continues to expand, we’ll hear new voices and new perspectives; we should welcome this rather than cast it out.

According to the Top Trends In Prepared Foods Report (2017), the number of self identified vegans in the United States has risen 600% in the past three years! That’s incredible news, but it means our demographics are changing rapidly. This movement is attracting people across all age groups, professions, political parties, ethnicities, education levels, and personality types. Things are only going to get more complicated going forward, and we need to be ready.

If you were hoping to stumble upon a magical solution in this post, I’m sorry to disappoint you. This is simply an invitation for some self-reflection. I don’t have the answers. Instead, I have some questions. Questions I recommend that we all ask before publicly commenting on The Next Great Vegan Battle, whatever it may be:

Ask yourself: Is my comment offering a unique, constructive insight? Am I using insulting or sarcastic language to offend, embarrass, or upset other animal advocates? Would I want someone who just went vegan this week to read this comment? Would I want people who still eat animals to read this? Would my comment please those who are still profiting from animal exploitation? Is this comment pleasing to my ego, and if so, why?

If we remember to ask ourselves these questions before we engage, we have a much better shot at productive, healthy, respectful discussions. We all have egos and strong opinions, and I certainly don’t claim to be immune to any of this drama. I’m sure I’ve played a negative role numerous times over the years, but I’m becoming more and more aware of how harmful that attitude is to animals. It’s only when we work together and resolve our differences respectfully that we actually create meaningful change.

Suffering animals are counting on us. We need to do better.

This article originally appeared on the blog the thetreekisser.com