In a recent appearance on an American talk-show Conan, Rainn Wilson reveals he has pet pigs – of whom he loves more than bacon. The Office star’s affection thus lead Wilson to adopt a vegan diet.

Wilson talked in his interview on Conan about how his wife loves to rescue animals. Recently, the pair rescued two pot-bellied pigs named Snortington and Amy. The two pigs live in the couple’s backyard during the day but come through a what Wilson calls a ‘piggy door’, to sleep on their indoor piggy beds at night.

In a powerful and completely unplanned moment, Wilson said one morning he got up to get breakfast. While the pigs were inside on their piggy beds snoozing – he started microwaving Trader Joe’s bacon. As Wilson was “chomping on it [bacon], looking at these adorable little pigs”, he made the heartbreaking connection and put his money where his mouth is; ditched animal products and went vegan.

Looking at the little porkers – we don’t blame him! 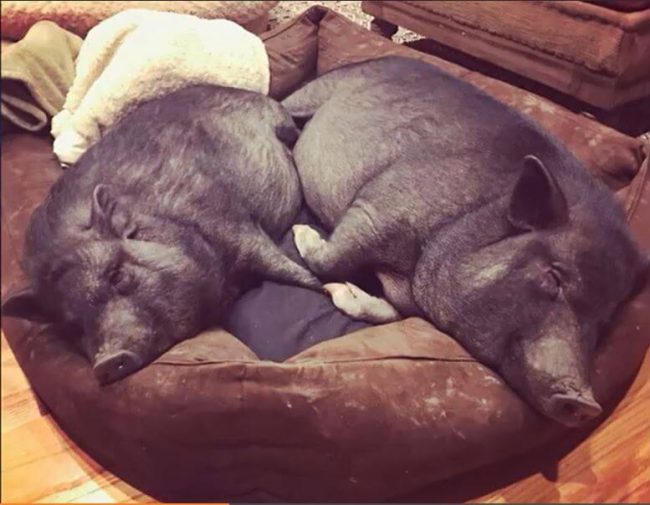 (Miley Cyrus chose staying at home with her pet pigs over touring for her new album this year, can these two vegan celebrities become best friends already?)

Rainn also discussed with Conan how he believes he is now that “annoying vegan” who asks for vegan food at restaurants, joking that for Thanksgiving this year, he ate “an entire celery plant and beets”. Rest assured though his character, Dwight, can enjoy the abundance of eateries in Scranton!

Previously, Wilson was believed to have gone vegan for his health (if his Instagram post was anything to go by). Plant based diets are known by many medical professionals as being the optimal diet for health, particularly when compared with the traditional (aptly named) “SAD” (Standard American Diet).

Wilson also proceeds to school Conan O’Brien on the correct pronunciation of powerful, plant based superfoods – quinoa and acai, with his newfound vegan affinity.