Updated April 18, 2019. How can vegan burger fans get their fill at A&W restaurants? Founded in 1919, the fast-food chain is now a century old and has been dishing up classic burger and fries combos to the hungry public for generations.

Branded as a restaurant which serves  “All American Food,” A&W is the kind of place that one drives to in a pick-up truck after cheerleading practice and places their order from their usual booth with a waitress who’s good friends with their favorite aunt. There are burgers, milkshakes, and breakfast platters piled with scrambled eggs, buttery toast, bacon, and sausage.

At an eatery that specializes in all things meaty, how does one order vegan at an A&W restaurant?

Despite the incredible rise of veganism in recent years, Americans adopting flexitarian diets for their health, and the influx of new vegan products hitting grocery store shelves, A&W’s US eateries have been a little slow on the uptake. However, diners can find plenty of plant-based options on the menu at A&W Canada.

A&W Canada is very focused on sustainability and limiting the company’s environmental impact. As they state on the website:

“We’re committed to reducing our environmental impact, through conscious use of packaging, waste, energy, and water. We’re all about serving up great taste with minimal waste.”

Providing more plant-based options and reducing their purchase of meat, dairy, and eggs could greatly decrease A&W’s carbon footprint and enable the company to stand by their heartfelt values.

A post shared by Julianne – Vegans of Montreal (@vegansofmontreal)

A&W Canada launched plant-based Beyond Meat burger, made by California-based company Beyond Meat, in over 1,000 stores on July 9 last year to overwhelming success.

The environmentally-minded Beyond Meat company was founded in 2009 by Ethan Brown and has gone on to become a hugely popular vegan brand, winning PETA’s “Company of the Year” award in 2013.

Focusing upon delivering classic dishes like burgers, sausages, and grilled chicken without the animal ingredients, Beyond Meat makes their soy-free, gluten-free products using things like pea protein and grains.

Brown said: “At Beyond Meat, we started with simple questions. Why do you need an animal to create meat? Why can’t you build meat directly from plants? It turns out you can. So we did. We hope our plant-based meats allow you and your family to eat more, not less, of the traditional dishes you love, while feeling great about the health, sustainability, and animal welfare benefits of plant protein. Together, we can truly bring exciting change to the plate — and Beyond.”

The exciting addition to A&W’s Canadian menu resulted in several stores selling out on the very first day. It reportedly sold more than 90,000 burgers in just 72 hours. The burger was such a hit that certain locations posted signs apologizing for the lack of stock. The patty, comprised of pea protein and beet juice for a realistic, juicy texture, and spices, is sandwiched in a vegan sesame seed bun.

Incidentally, following the successful launch the Canadian government invested $150 million in plant-based protein “superclusters” in the nation’s western provinces. The country aims to become a world leader in protein ingredients like beans and peas – the key ingredient in the Beyond Burger.

The Beyond Burger isn’t the only vegan-friendly burger on the menu. The chain’s Veggie Deluxe, which consists of a brown rice and mushroom-based patty, can be made vegan by requesting a sesame seed bun, ranch sauce, and cheese. The recipe used to contain eggs, but these were recently removed. Either burgers can be served with onion rings or fries either of the sweet potato or the Russet thick-cut variety.

Naturally, this meal can be washed down with A&W’s signature vegan-friendly root beer. In fact, this was the first item sold by A&W co-founder Roy W. Allen when he opened a stand in California a century ago. The entrepreneur went on to partner with Frank Wright and the pair opened their first restaurant in 1923.

The beauty of the Beyond Meat burger is that it can be enjoyed by vegans, vegetarians, and omnivores alike. The standard burger order comes served with chipotle mayonnaise and the chain’s signature “uncle sauce.” To make the order vegan, just request that it’s served without.

Those with allergies or strict diets should also be aware that A&W Canada cooks its vegan burgers on the same grill as other burgers. The company writes on its website, “The patty in our Beyond Meat Burger is 100% plant-based. However, we cook all our burger patties, including our beef patties, on the same grill, and our mayo is made with eggs. Our restaurants are happy to help you modify the toppings of the burger to your preference.”

However, a simple request for the A&W chef to cook your vegan burger separately will ensure a truly meat-free meal. A&W’s plant-based dining experience does not stop there. From March 11 the company is extending its menu to include a new breakfast sandwich.

The Beyond Meat “Sausage and Egger” is served on a vegan English muffin and consists of a meatless breakfast sausage patty, an egg round, and melted cheddar cheese. The new Beyond Meat offering is a vegetarian version of the popular porky “Sausage and Egger” sandwich, which can be made vegan by omitting both the cheese and egg.

Beyond Meat’s vegan breakfast sausage is made from peas, brown rice, and mung beans and is said to have a salty, sweet, savory flavor.

A&W Canada has some vegan options for breakfast as well. You can order the hash browns, toast (hold the margarine), and hot coffee or tea.

You can also finish off your meal at A&W Canada with root beer lollipops, if you’re so inclined. With breakfast and main meals taken care of, the only thing missing from A&W Canada’s plant-based menu is dessert.

Vegan at A&W US

Vegan options in US locations of A&W are a bit more limited, but the chain offers a few vegan options.

Like Canadian locations, the fries are vegan, so order as many as you like – the ketchup, barbecue sauce, and if you like, applesauce are all vegan.

While options are limited at the moment, with increasing numbers of plant-forward eaters throughout North America, one can speculate that US A&W locations might be adding more vegan food to the menu in the near future. 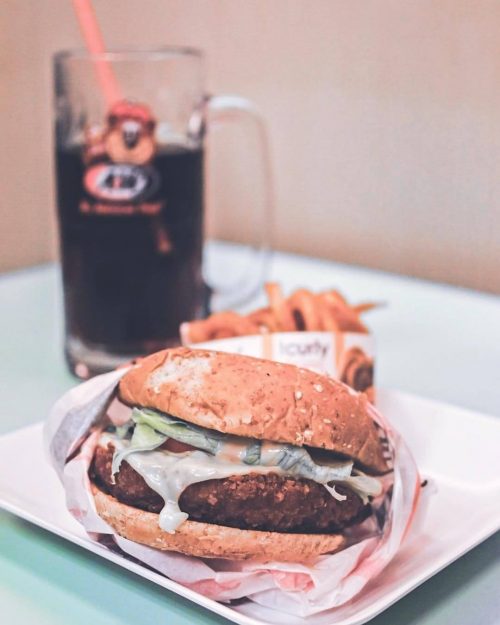 A&W Indonesia added a veggie burger to the menu, made from a blend of tofu and vegetables. LIVEKINDLY has reached out to A&W Indonesia to confirm patty ingredients.