This Fourth of July, Americans will consume more than 150 million hot dogs, According to the National Hot Dog and Sausage Council. But despite being a traditional American food, a good portion of the population also wonders: are hot dogs bad for you? And what’s so American about them, anyway?

A recent article on Inverse explored one particular hot dog ingredient, a chemical compound known as sodium nitrate. This ingredient is added to hot dogs and other types of processed red meat like bacon and cold cuts as a preservative and flavor additive. It is also what gives the all-American frank its characteristic pink color.

Meat from recently slaughtered animals is naturally red thanks to a pigment in the muscles called “myoglobin.” Part of myoglobin’s chemical structure is a molecule called “heme,” or the same ingredient that gives the vegan Impossible Burger a pink hue in its “raw” form. However, when meat is “old,” it loses its natural red color and turns grey.

Hot dogs, which are typically made from meat trimmings from pork, beef, and chicken mixed with food starch, “flavorings,” and corn syrup would be grey, if not for sodium nitrate. During the hot dog-making process, sodium nitrate is added to the meat slurry in order to make it look more appetizing. While there are some high doses of sodium nitrate can be potentially carcinogenic, the levels used in commercial hot dogs are “safe.” However, that doesn’t mean that traditional hot dogs are a good choice. 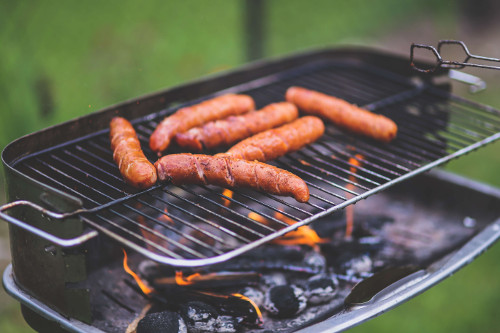 A survey released in May by organic meat company Applegate revealed that nearly 50 percent of Americans are afraid to know what’s in hot dogs because they are known to be made from “low-quality,” chemicals, and artificial ingredients. While the study aimed to promote Applegate’s “natural” hot dogs, there are reasons beyond the standard all-American hot dog’s questionable content to consider. Studies have linked the consumption of processed meat, even in small amounts, to an increased risk of a variety of cancers ranging from breast cancer to colorectal, lung, stomach, and more. Conversely, ditching red and processed meats for plant-based alternatives, such as vegan hot dogs, may dramatically reduce one’s risk of cancer.

Beyond the health risks associated with processed meat, hot dogs are bad for the environment. A growing body of scientific evidence shows that meat is one of the biggest contributors to climate change. This has led not only to a growing number of people who are consciously choosing to reduce their meat consumption as a means of reducing their carbon footprint. Additionally, experts and legislators have called for people to cut back on meat to combat rising temperatures.

Ketchup, move over. ? These Kimchi Jumbo Dogs are comin’ in HOT ?☄️? . Recipe link in bio.

On top of contributing to melting polar ice caps, industrial animal farming is notoriously filthy. Factory farms, which are typically built close to low-income communities, are known to pollute air, waterways, and land. Towns close to factory farms often experience higher rates of health issues such as asthma, nausea, burning eyes, and a lower quality of life in general.

Fighting against injustice pushed by industrial agriculture is on the rise, though. In North Carolina, for example, residents are pushing back against the world’s largest pork producer, Smithfield Farms. One case against an industrial hog farm ended in favor of residents, which went on to inspire 25 additional lawsuits against nearby hog farms by citizens who wanted to see the facilities shut down in the name of justice.

In a country that reportedly stands for liberty and justice for all, traditional hot dogs, which harm people, the planet, and animals, may not be so American after all.