This vegan recipe is the best of both worlds! I think I have revolutionized cinnamon rolls.

I have had this idea for so long, and I finally got around to making it!

So, obviously, this is by no means very healthy and doesn’t make for the healthiest breakfast. But in the winter or around Christmas time, it’s nice to eat cinnamon rolls for breakfast. It’s even better when it’s baklava cinnamon rolls! I personally eat these more as a dessert or snack because it’s quite the sugar high for first thing in the morning!

You can enjoy them on either side. I prefer to enjoy the side that soaks up all of the syrup. I tried to make a version with the regular frosting as well as the syrup, but honestly, the syrup was enough. If you want the more traditional cinnamon roll look, top with frosting if desired.

When my husband first tried these, his jaw dropped. And he said the word I like to hear the most when he tries my food: WOW! I knew right then and there my recipe was ready (after a few tries admittedly). This recipe is fairly easy, it’s just a bit time consuming with the proofing times. I personally don’t mind, but obviously it’s not a quick 15 minute recipe.

It’s life-changing dough, so rich and sweet and amazing! I will be making this recipe for years to come! 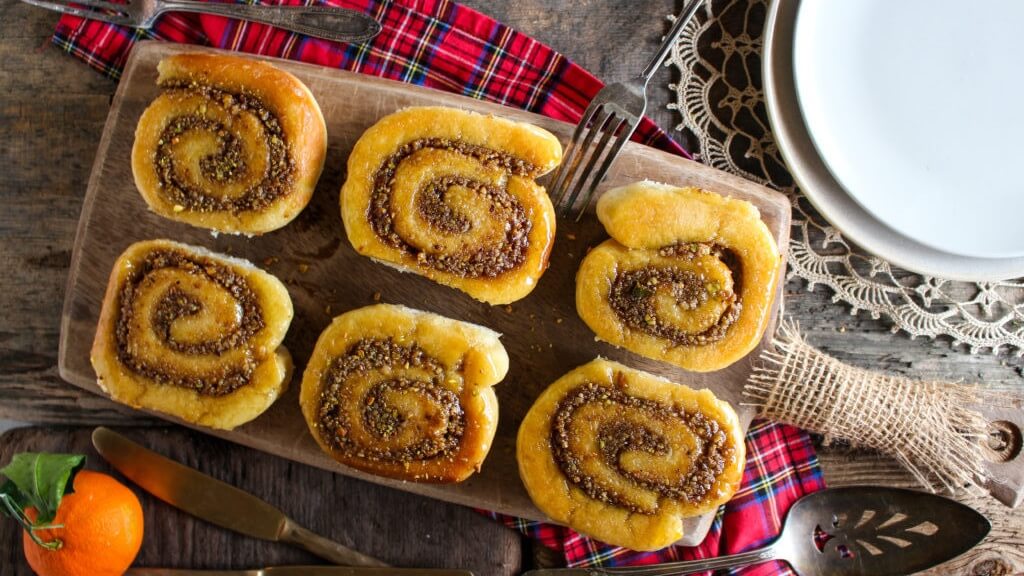 Sweet tooth still not satisfied? This cranberry orange cinnamon roll recipe is vegan, super tasty, and simple to make, only taking 30 minutes. This recipe uses refrigerated pizza dough so if you don’t want to make the dough from scratch, this may be your answer. According to the recipe creator, these vegan rolls bring together sweet cranberry filling and a “fragrant sticky sweet orange glaze” (made with dairy-free butter, vanilla extract, and orange juice) to make the sweet treat taste and smell “amazing.”

Hungry for more? These vegan Norwegian cardamom rolls taste like doughy sunshine. The buns are light, soft, and juicy and are filled with dairy-free vanilla custard.

This recipe was republished with permission from Everyday Vegan Food.