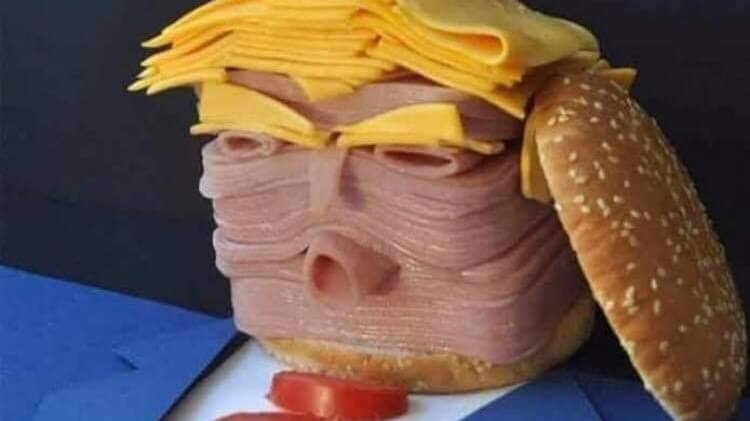 On Thanksgiving day, Twitter user DJChitown tweeted an image of President Trump in sandwich form after the head of state tweeted about how cold it was in New York City. The president wrote, “This is the coldest weather in the history of the Thanksgiving Day Parade in NYC, and one of the coldest Thanksgivings on record!”

Despite evidence that climate change is a significant threat to the planet, the president believes that global warming will not have a lasting impact on the environment. Oxford University professors disagree, releasing a study earlier this year acknowledging the danger that climate change poses, and concluding that following a vegan diet is one of the best ways to reduce our impact on the environment.

And the unappealing ham and cheese Trump-inspired sandwich may encourage more people to ditch meat and dairy, said DJChitown in response to the president’s tweet.

This isn’t the first time that the image of the sandwich-in-chief has made an appearance on social media. Since spring, the piece of art, which appears to be created by an artist named Asler, began popping up on Twitter and Instagram.

Since President Trump was elected U.S. president in November 2016, a few vegan brands have spoken out against Trump and his supporters.

In June, Lipslut, a popular vegan cosmetics brand, began selling a new lipstick called “F*ck Trump.” One-hundred-percent of the matte pink lipstick’s sales through July 19, 2018, were donated to RAICES, KIND, Las Americas Immigrant Advocacy Center, Young Center for Immigrant Children’s Rights, and Al Otro Lado. All of these organizations did and continue to do work to help reunite the families who were affected by Trump’s immigration policy.

“While I’m happy to hear that families will no longer be separated, I am still against Trump’s zero-tolerance policy of prosecuting any who crosses the border,” Lipslut founder Katie Sones told Refinery 29. “Lipslut will be donating to organizations that help families through this process, as well as those trying to reunite.”

And in September, Lipslut released a bright red lipstick shade, called “F*ck Kavanaugh.” The shade took aim at the then-Supreme Court nominee Brett Kavanaugh. All proceeds of the red lipstick through October 7 were donated to Rape, Abuse & Incest National Network (RAINN), No More, the National Alliance to End Sexual Violence, and End the Backlog.