Škoda’s first EV is a miniature version of its Citigo, called the CITOGOe iV. The battery-powered four-seater features a 61 kW electric motor, with a range of up to 265 kilometers. A CCS (combined charging system) cable allows the battery to be charged to 80 percent power in just 60 minutes.

“Zero emission, nimble and spacious despite compact dimensions, the ŠKODA CITIGOe iV is a perfect vehicle for modern cities,” states the website.

The CITIGOe iV is only the beginning for the Czech brand. Škoda first unveiled the concept for its electric vehicle, the bright yellow Vision iV, last March. The seats were made from Dinamica, a vegan suede made from recycled polyester, which reduces CO2 emissions by 80 percent compared to conventional materials, according to Škoda. 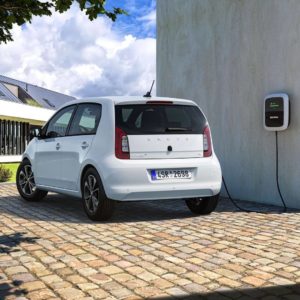 The Future of Cars Is Electric and Vegan

Škoda isn’t the only automotive manufacturer eyeing a zero-emission future. Its parent company, Volkswagen, unveiled the ID. Roomzz, an electric SUV with apple leather seats last April, which will be available from 2021.

Škoda’s plan to launch more electric vehicles plays into Volkswagen’s goal of unveiling 70 new models over the next decade. This includes Audi’s vegan-friendly eTron. The brand will work with American brand Ford on developing “next generation vehicles” in a bid to lower its CO2 emissions by 30 percent, according to CNN.

The once-mocked electric car is now mainstream, thanks in part to Tesla. The California-based company helped pioneer the modern EV, and CEO Elon Musk welcomes competition. He made all Tesla patents public in 2014, acknowledging that one company cannot create a more sustainable future alone. 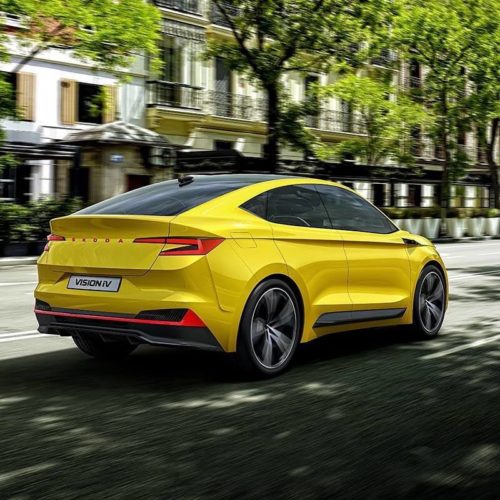 Škoda’s will have vegan leather seats

“Our true competition is not the small trickle of non-Tesla electric cars being produced, but rather the enormous flood of gasoline cars pouring out of the world’s factories every day,” Musk wrote.

Both Volkswagen and Škoda join the fleet of car companies embracing all-electric, vegan-friendly models, including Nissan, BMW, and Volvo.

Production for the CITIGOe iV is expected to begin later this year at Volkswagen’s plant in Bratislava, Slovakia. It’s expected to cost less than $20,000.

The Future of Food: Fungi and Robots Rule