At the Guns and Rockets Dining Facility at the Fort Sill military base in Oklahoma, every meal has a vegan option. Currently, it’s the only canteen in the army that provides soldiers with plant-based dishes, US military independent news source Stars and Stripes reports.

The initiative is thanks to Chief Warrant Officer 2 and food adviser for the 75th Artillery Brigade Jeremy Patterson, who has followed a plant-based diet for years. He decided to push for an updated menu after receiving a comment card in late 2017 requesting more vegan options for religious reasons.

Patterson saw it as an opportunity to not only make the dining hall more inclusive, but also to provide options to help soldiers get healthier. 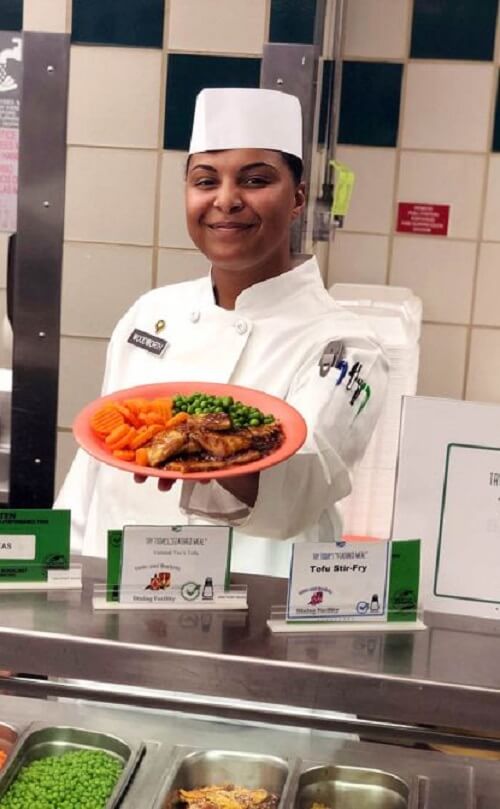 “We began testing items in February 2018 and were fully operational with labeling and an option at every meal by July of 2018. Now, we sell out of the plant-based entrée at every meal,” said Patterson.

The new menu includes black bean tacos, tofu stir-fry, and vegan broccoli and cheese (Patterson added that this typically runs out halfway through lunch hour). Vegan Beyond Burgers, made by California-based brand Beyond Meat, may be in the facility’s future. During a taste test involving the realistic meat-free burger, 121 soldiers said they preferred it to beef.

“We have a lot of support from [Fort Sill commander Maj. Gen. Wilson Shoffner], who stood up on the news and said he was having his first plant-based Thanksgiving meal,” Patterson continued. “He is showing soldiers that they don’t have to hide in a closet if they don’t want to eat meat.”

The majority of the US was raised to believe that meat is necessary not only to be healthy, but to get strong. A growing body of studies shows that a plant-based diet is effective in reducing one’s risk of heart disease, type-2 diabetes, and other chronic health issues. Professional athletes like Celtics point guard Kyrie Irving and 15 members of the Tennessee Titans are showing the public that a plant-based diet is helping them stay at the top of their game.

“This is a big deal in the military as the culture is different and has not yet changed as fast as the civilian sector,” Patterson told LIVEKINDLY in an email, explaining the significance of the vegan-friendly dining hall.

Patterson hopes that the change will inspire other bases and people outside the military to consider eating more plant-based food.