This yummy vegan spinach and artichoke dip is one of those recipes that has worked its way up into the ranks of those worthy of holidays, potlucks, and parties.

The first time I served this vegan version of the classic spinach and artichoke appetizer was last year as part of our Thanksgiving snack spread, and it was an immediate hit with the family. I also served this dip at a Halloween party we attended. I brought a double batch of this dip dressed up with a graveyard presentation. The dip was completely devoured with tortilla chips and pretzels. So many people asked for the recipe!

The dip is certainly a hit at family gatherings. However, this five-ingredient spinach artichoke dip can be served for any occasion!

You simply cannot go wrong with this creamy, classic dip. It’s quick and easy to make! Plus, it’s healthy! Artichokes are an excellent source of fiber and spinach is a terrific source for many vitamins. Spinach is also a good source of iron, manganese, and magnesium! 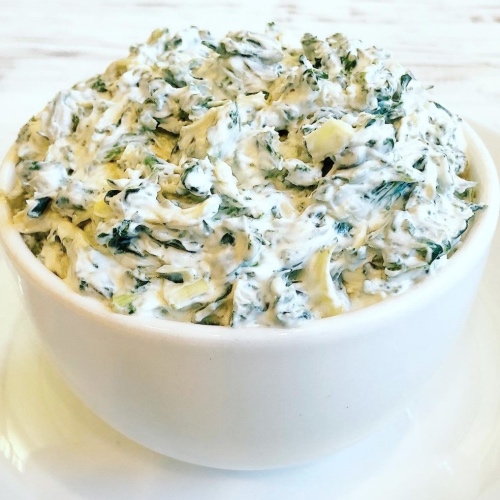 A few questions I get asked about this dip:

Can I substitute onion soup mix? Technically, yes. However, I don’t recommend it. I tried this out of desperation once when the supermarket was out of leek soup mix and it just wasn’t the same. The onion flavor is just too strong. Leek has a milder flavor and works much better with the spinach and artichoke.

Is refrigerating the dip overnight really necessary? Yes. First of all, it gives the flavors time to really blend together well. And second, the leek soup mix contains bits of dried leek that can be crunchy, unless they’ve had several hours to soften up in the dip overnight.

What should I serve with spinach and artichoke dip? In my experience, the most popular dippers are fresh veggies (mini carrots, broccoli & cauliflower florets), mini-pretzels, tortilla chips, pretzel bites, and baguette slices.

Get Your Spinach Fix

Can’t seem to satisfy your spinach cravings? Get your spinach-garlicky-cheesy fix with these mouthwatering vegan garlic, cheese, and spinach pizza rolls! They’re so easy to make—and to eat! Plus, you can easily pack them away for lunch to-go. Just warm them up in the microwave—and be sure to enjoy them with dipping sauce!

Make like Dr. Seuss with this green eggs and meatless ham recipe featuring leafy green spinach. The recipe only calls for a handful of ingredients, including red potatoes, extra firm tofu, chopped onions, garlic clove, spinach, and of course, vegan green food coloring. This recipe is perfect for a fun breakfast with the kids!

For a hearty, filling dinner, try this Indian Saag Spinach and Tofu ‘Cheese’ Paneer Vegan recipe. According to the recipe’s author, the “Indian-inspired recipe is one of John Mackey’s favorites. It is quite simple to make, but it takes a lot of fresh spinach (saag) to get the right texture and flavor. Tofu substitutes well for the paneer cheese used in traditional recipes, as it has a similar texture and mild flavor.”

This recipe was republished with permission from This Wife Cooks.

Vegan Casserole in a Skillet With Plant-Based Taco Meat

How to Make Vegan Sausage and Pumpkin Ravioli

Smells Like Vegan Donuts at This Nirvana-Themed Restaurant in Scotland