Ice cream is having a moment. Of course, it’s been a popular treat for decades, from soda fountains to ice cream trucks, but a new wave of ice cream trends have inspired major companies and independent purveyors to revamp their product lines. Non-dairy ice cream is one such trend, but some small businesses are going above and beyond. Little Jo Berry’s, a plant-based cafe in Ottawa, has created vegan narwhal-themed ice cream.

The latest cute creation from this quaint vegan cafe and bakery features a narwhal, or what the company calls, “the unicorn of the sea.” The blue-tinted Earl Grey Cookie soft serve is swirled to a point and adorned with edible little fins, chocolate chip eyes, and a sparkly molded narwhal horn. The treat is garnished with a bit of cookie crumble, which may represent sand, or simply just because it adds another element of texture. The dessert is a tongue-in-cheek play on the popular unicorn trend; although narwhals may not be magical, they’re certainly cute and cuddly (at least in soft-serve form). 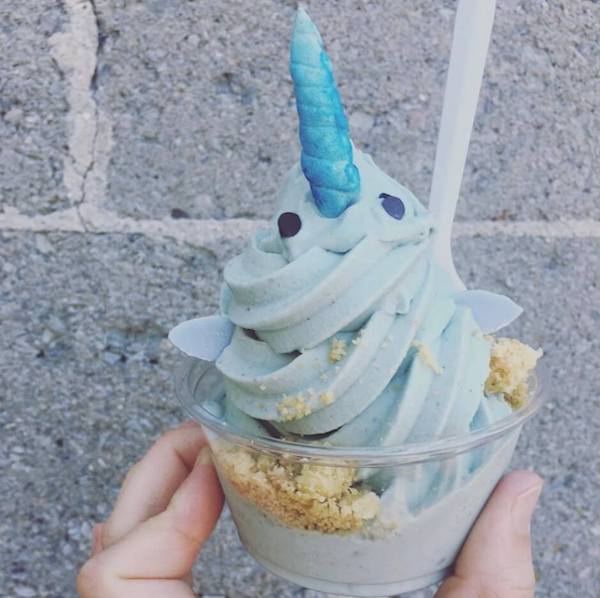 This isn’t the cafe’s first attempt at adorable edible treats. They’ve made everything from smiling animal macarons to piglet cupcakes, and even a dark unicorn soft-serve. The cafe is also known for its freakshakes, which are milkshakes adorned with decadent toppings, such as whipped cream, frosted donuts, and entire slices of cake. They are almost too fantastical to eat…almost.

Other plant-based small businesses are also partaking in the cute food trends. Karma Baker, an allergen-friendly bakery in Westlake Village, Calif., has gained national attention for its handmade unicorn and mermaid-themed donuts. The tiny business received so much praise, it decided to offer nationwide shipping. Following the trends helps to attract non-vegan customers who may not typically consider trying a vegan alternative. However, once omnivores do try these vegan confections and realize they can taste as good (or better) than animal-based sweets, they may opt to purchase the vegan goods again.

Narwhal-themed ice cream may seem like a fun and light-hearted gesture, and surely it can brighten anyone’s day. But this ice cream has the power to do far more than make people smile. It can change perspectives.