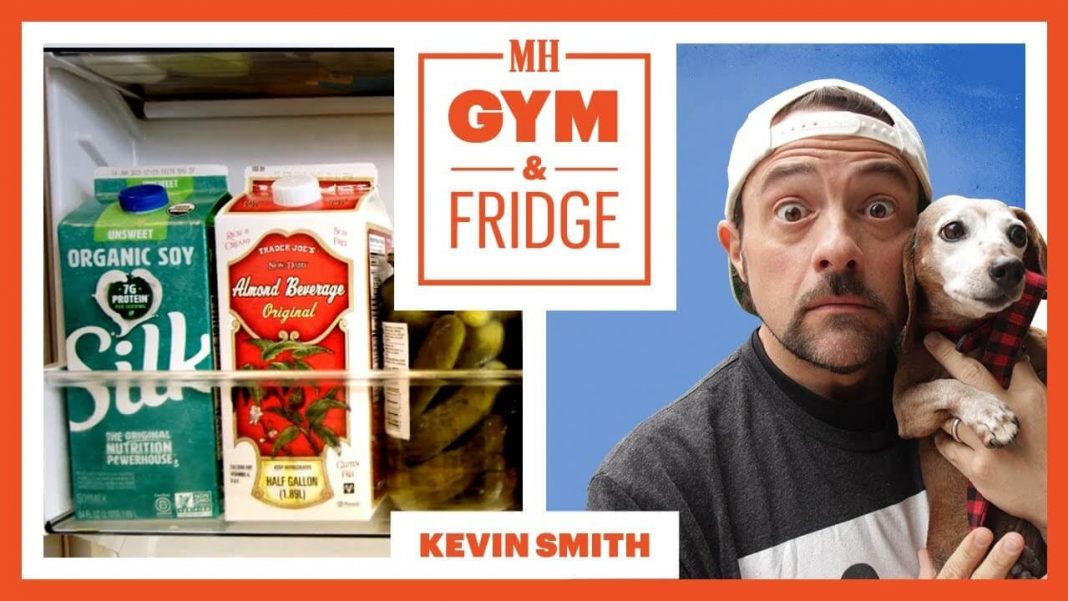 What does filmmaker, director, and podcaster Kevin Smith keep in his fridge? A lot of vegan food.

Leading men’s magazine Men’s Health took a look inside Smith’s fridge and gym to see how the 48-year-old keeps in shape.

Smith went vegan nearly a year ago following a “massive” heart attack he experienced in February 2017. “I had a 100 percent blockage in my [Left Anterior Descending Artery]. It was a widow-maker heart attack, I almost died. Twenty percent chance of living,” he said about the health scare.

“At that point I said, ‘I don’t want to f*cking die, I will go vegan,” the entertainer said. Smith lost 58 pounds and drastically improved his cholesterol levels and overall health.

The transition to animal-free eating has been a “wondrous journey” for Smith, who said, “I wound up changing my life. Little changes in the kitchen changed my life.”

Hiking Runyon with my faithful canine companion, wearing an old school 1989 Tim Burton Batman tee from @teepublic! I bought 30 new t-shirts as motivation to do this same hike as many times before I leave to make @jayandsilentbob Reboot next month! I will showcase a new shirt each day as proof that I’m either hiking Runyon on the daily or I’m doing one walk while bringing 30 different shirts with me. This is Shirt 1 of 30! #KevinSmith #teepublic #JayAndSilentBobReboot #tshirts #batman89 #runyoncanyon

Explaining what his fridge used to look like, Smith said, “The fridge used to be packed with a lot of milk. I drank a lot of milk back in the day. This is going to be a little embarrassing to admit. I drank two gallons of milk a day. Probably why I had the heart attack.”

Now, the filmmaker drinks organic soy milk by Silk and almond milk from Trader Joe’s. Pasta sauce, jars of olives and pickles, vegetable broth, plant-based gravy, and dairy-free cheese from Daiya are the pride of place on his fridge shelves, as well as coconut eggnog and iced tea by Honest Tea.

Smith said he is a “big fan” of the Beyond Burger, a plant-based meat patty made from pea protein that’s popular for its similarity to beef — it looks, cooks, and tastes like a beef burger. “I live on this stuff, I eat it all the time,” Smith said.

His eating habits aren’t complicated since he isn’t a “big cook” and is often on the road. He buys prepared meals from vegan snack brand MadeGood and when he travels, he takes snacks like dried chickpeas, which are a good source of protein.

Why Did Kevin Smith Go Vegan?

Smith’s move to veganism was prompted partly by his nutritionist who, after the heart attack, recommended going plant-based, and partly by his daughter Harley Quinn Smith, who was vegan “long before” the rest of the family (who are now all plant-based as well).

“I ate the way I wanted to for 47 years,” Smith said. Following the heart attack, he said to his daughter, “I’m going to give this vegan thing six months, I’ll do it your way for six months.”

But Smith stuck with his choice. “It’s not even hard, I don’t miss anything,” he said. “I’m not saying I’m an expert but I’ve been through some stuff and so now I can speak on the issue of men’s health.”

Smith revealed the “ludicrous” ways he’s tried to lose weight in the past, including trying a “fat-blocker” pill which claimed to block 33 percent of fat intake. However, instead of the fat being absorbed, it’s “manifesting in your body as greasy, oily sh*t.”

“Now I don’t diet at all. Now I just eat better,” Smith exclaimed. “That’s how I [lost weight]. And I did it with relative ease, it wasn’t hard.”

Smith couldn’t show Men’s Health his gym since he doesn’t have one, instead using “the outside world.” He never does “intense” workouts. Instead, Smith enjoys walking his dog and hiking.