The Canadian chain hesitated to jump on the dairy-free bandwagon at its standard locations. But the new restaurant, located just one floor down from Tim Hortons’ headquarters in downtown Toronto, will serve almond, soy, and oat. 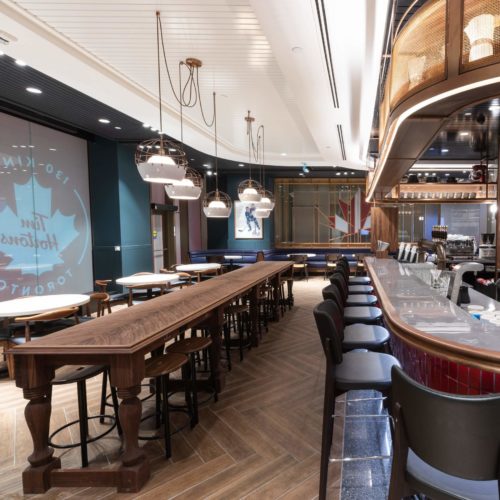 Tim Hortons 130 King is a modern interpretation of the restaurant chain where the brand will test new menu items and technology initiatives. The Brew Bar will serve a wide array of espresso drinks that can be made with vegan milk, such as americanos, lattes, cappuccinos, flat whites, cortados, and macchiatos.

Pour over and cold brew made from beans steeped for 16 hours will also be served. The concept cafe will introduce a new single-origin coffee program, which will introduce new blends seasonally. The first is the Honduras Trifinio, a medium roast with cocoa and citrus notes.

It will also test sustainability initiatives that may be rolled out on a national level. Tim Hortons 130 King will trial single-use coffee cups made from 30 percent post-consumer recycled materials, strawless cold cup lids, paper straws, and wooden stirrer sticks. Takeout contains will be fully recyclable and compostable utensils will be tested.

Food and donuts will also be available. LIVEKINDLY has reached out to confirm if there will be vegan options on the menu.

Vegan milk is not available at Tim Hortons nationwide, but its inclusion on the new concept restaurant menu hints that it may happen in the near future. The popular quickserve chain — one of the largest in North America — recently turned to plant-based meat brand Beyond Meat to beef up its menu.

“I think we’re going to be one of the most affordable products on the market,” COO Mike Hancock said.

Earlier this month, the restaurant introduced two takes on the Beyond Burger at select locations, marking the first time Tim Hortons served a burger of any kind.

Tim Hortons 130 King is located at the base of the Exchange Tower on 130 King Street West in Toronto.