(Updated March 2020) | Tim Hortons pulled Beyond Meat from its menu after a limited trial last year.

“I think we’re going to be one of the most affordable products on the market,” Mike Hancock, Tim Hortons chief operating officer, told the Financial Post last May.

Hancock noted that Tim Hortons worked with Beyond Meat for over a year to develop its new meat-free menu items.

However, the meat-free options were pulled from the menu last January. “We introduced Beyond Meat as a limited time offer. We are always listening to our guests and testing new products that align to our core menu offerings. We may offer Beyond Meat again in the future,” Tim Hortons said in a statement. 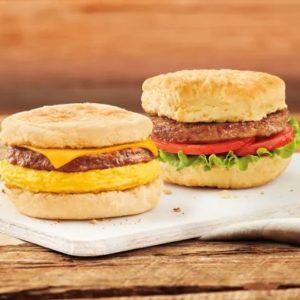 Tim Hortons new Beyond Meat Vegan Sandwich, on the right

“We’re going to be able to bring this type of product to more guests than even our competitors are,” Hancock continued. “…There’s folks who want these kinds of alternative protein … but don’t currently necessarily have access to it.”

The restaurant chain decided on a test in order to better understand demand for the product. The meat-free sandwiches are now available at 4,000 locations across Canada.

“We’ve listened to our guests and are excited to be able to offer three delicious breakfast sandwiches that vegans, vegetarians, flexitarians, and meat lovers can feel good about,” Hancock said in a statement.

Beyond Meat is known for its realistic vegan meat products—such as the Beyond Burger and Beyond Sausage—made from pea protein. The El Segundo, California-based brand made waves last May when it became the first plant-based meat brand to go public and remains a hot topic on the stock market.

Shares jumped 163 percent on the first date, making it the biggest IPO in nearly two decades. Its products are available at more than 12,000 locations worldwide, including U.S. fast-food restaurants Carl’s Jr, T.G.I. Friday’s, and Del Taco.

The launch is similar to A&W Canada’s newest meat-free menu item: a vegan-friendly Beyond Meat breakfast sandwich, unveiled in early 2019. It was a follow-up to its successful Beyond Burger, which was first tested at select locations last June. The plant-based patty outsold traditional beef burgers and sold out in certain locations. A&W Canada later credited its 10 percent fourth-quarter sales increase to the Beyond Burger.

“I would say that innovation is the biggest driver of our business. Suddenly, people are attracted by one or the other of the changes and that all adds up to more guests in our restaurants,” said CEO Susan Senegal.

Beyond Meat is boosting profits in restaurants stateside as well. Mexican-inspired fast-food chain Del Taco added Beyond Meat’s vegan beef crumbles to the menu late last April in what Bloomberg called the biggest new product launch in the company’s history.

“Since launching 11 days ago, we are very encouraged by increases in both check and traffic, as this new product platform is bringing in many new or lapsed users and appealing to regular Del Taco guests, who are all eager to sample our Beyond Taco offerings,” said CEO John Cappasola.