Parlor City Vegan, a mobile vegan comfort food cafe and catering company based in upstate New York, was selected as the winner of the 2018 City of Binghampton Business Plan Competition.

“I think as many of you know, the competition”  Mayor David began at a press event,“which is the longest-running of its kind in the greater Binghampton area, seeks to cultivate local business development… This year’s winner will join the growing food and agriculture industries in the southern tier as well as focus on farm-to-table businesses that keep our dollars local. Vegan and dairy-free foods,  specialty cheese [sic], is a fast-growing local market.” 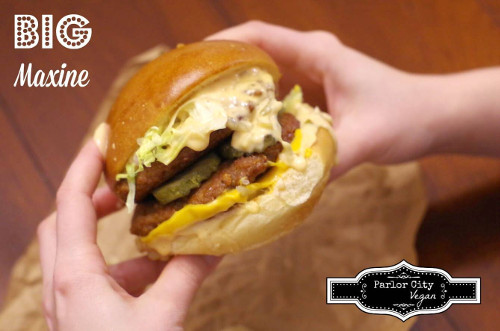 A longtime vegan, Liu found herself opening a Binghampton vegan catering business after her father suffered a heart attack at the age of 58. Unable to eat his favorite meal, macaroni and cheese, on his new low-fat diet, Liu sought to develop a vegan macaroni and cheese that her father would love. When he tried the dish, Liu’s father, who used to mock her plant-based diet, was surprised by how delicious it was.

Winning over her father made Liu consider opening a vegan food business, and eventually, Parlor City Vegan in Binghampton was born. She says that part of the prize money will be used to pay for a shelf-life study and to commission a professional graphic designer to create packaging for her products.

Moving forward, Liu hopes to grow from a shared commercial kitchen space to a fully operational facility. “Right now, I am cooking gourmet foods on a George Foreman grill,” she said. When she first began selling her vegan comfort food at a local farmers market in 2016, she sold about 10 sandwiches daily. Liu now sells over 100 sandwiches at every market and is officially backed by a well-deserved business award from the city.