Seth Tibbott, Tofurky founder and creator of the popular vegan holiday feast, recently tried the McVegan — the vegan burger released by McDonald’s in Finland and Sweden on a recent trip to Europe.

“Never thought I would live to see this,” Tibbott wrote in a Facebook post last week, paired with photos of his food. “Last night’s dinner in Helsinki, Finland. Not too bad! Progress.”

Tibbott ordered the McDonald’s McVegan as a “Happy Meal,” which includes French fries and a soda. Contrary to the fast-food giant’s fries in the United States, which contain “natural beef flavor” and “milk derivatives,” you can order a side of vegan fries with the McVegan. When asked for his thoughts on the plant-based burger, Tibbott replied: “Well, by today’s burger standards… it’s decidedly middle of the road but I left feeling satisfied overall. Epic historic moment. Today only Finland and Sweden, tomorrow the world!”

He also added that vegan options are plentiful in Finland: “I counted 53 frozen vegan items in the supermarket across the street. You go, Finland!” 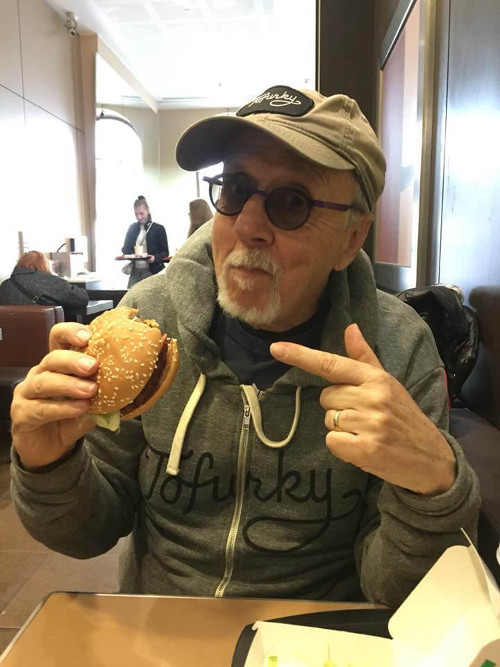 Late last year, McDonald’s trialed the McVegan, a vegan burger featuring a soy-based patty developed by Norwegian company Orkla, at one location in Finland. In just one month, the company sold 150,000 McVegans, which led to the company adding it to all McDonald’s locations in Finland and restaurants in Sweden. “The test in Finland blew all the expectations out of the water,” Staffan Ekstam, Head of Food Strategy at McDonald’s in Sweden, told Business Insider.

McDonald’s isn’t alone in testing the waters with vegan fast-food options. Earlier this year, the burger chain Shake Shack added the “Veggie Shack” vegan burger to the menu to select locations in New York City. The vegan Beyond Burger can be found at TGI Fridays throughout the country and the Beyond Burger and the Impossible Burger can be found on the menus of burger chains like Bareburger, Wahlburger, and Umami Burger. Recently, the vegan Impossible Burger made its fast-food restaurant debut at White Castle to much acclaim. Both companies hope to continue distribution throughout the United States and international markets.

At this moment, it is unknown if the McVegan will come to the US. However, a recent petition asking for the Impossible Burger to be added to US McDonald’s locations gathered more than 40,000 signatures.