“10 years of Meat Free Monday – I can’t believe it! It’s beautiful, and the support we’ve
had from all these lovely people – you and all the other lovely people – it’s been great,” Paul said. “It’s a simple idea that people have caught onto. They love it, we love it, the planet loves it, everybody loves it, the animals love it. It’s Meat Free Monday – happy 10 years!”

Meat Free Monday was launched by Paul and his daughters, sustainable vegan designer Stella and vegetarian cookbook author Mary in 2009 to encourage others to eat more plant-based food. Since its launch, the campaign has worked with schools, universities, and restaurants across the country, appealed to the European Parliament, and launched “The Meat Free Monday Cookbook” in 2016. 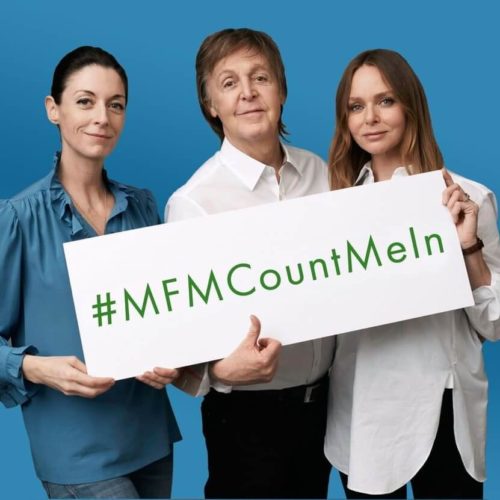 Meat-Free for the Planet

“Join us in celebrating 10 years of Meat Free Monday. Our planet needs us more now than ever. So let’s save the animals, save the planet, together,” Stella said in a statement.

The 10-year anniversary coincides with the launch of Meat Free Monday’s newest campaign, #MFMCountMeIn to encourage others to eat less meat to help stave off climate change. A growing body of evidence shows that a vegan diet is the most effective way to reduce your carbon footprint.

Consumer eating habits have changed over the past decade, with 91 percent of Brits identifying as “flexitarian.” Major supermarket chains such as Tesco, Sainsburys, Waitrose, and Morrisons have all launched own-brand vegan ranges in order to meet demand.

“I am proud to be a member of the Meat Free Monday global community, where everyone can make a difference,” said Mary.

Other meat-free campaigns across the globe, including Meatless Mondays in the U.S., Green Monday in Hong Kong, Segunda Sem Carne in Brazil, and Meat Free Monday All Japan also wished Meat Free Monday a happy birthday.