These vegan mushroom meatballs are pasta-ready. Eat these vegan meatballs with spaghetti, mashed potatoes, or enjoy them as is.

I love mushrooms, but my toddler does not. I’m not surprised at this as many kids reject the squishy mushroom texture. However, he absolutely loved these vegan meatballs! they taste a lot like veggie patties, which are a huge hit in our family. I added some smoked salt in this recipe, which was delicious. But you can add smoked paprika instead to give a slightly smoky flavour.

The mushroom balls use flax eggs instead of chicken eggs. I used to avoid recipes using flax eggs as I found it incredibly difficult to grind flax seeds. To grind flax seeds in large amounts, I use the high setting on my Vitamix. I will do two cups at a time and store them in the freezer. This is the best option so that the flax seeds do not oxidize and therefore you can get all the nutrition out of them. But it’s also great because they don’t actually freeze. So you can use them straight away without waiting for them to defrost. It works exactly the same as fresh.

I’ve also tried my hand at making my first vegan gravy. I’ve actually never made any type of gravy before. And, to be honest, I’m not sure I’ve eaten it before either? The gravy wasn’t a thing in my culture. And I’ve always been a bit grossed out by it. This gravy did add a wonderful saltiness to the mushrooms balls though. We love to have this vegan meatball recipe with mashed potatoes. But you can serve them with whatever you like. They would also work really nicely in a linguine pasta recipe.

Top Your Pasta With These Vegan Mushrooms Meatballs 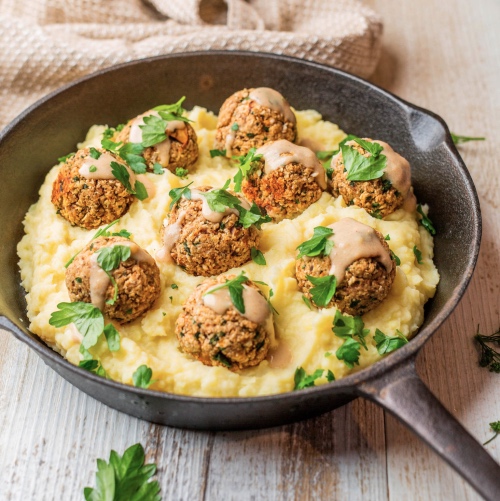 For a delicious dessert recipe to serve after dinner, try making my no-bake vegan chocolate and rose tart. It features a base of almonds, pitted dates, sunflower seeds, and cacao powder. This is topped with a delicious cashew-based filling that features pitted cherries and chocolate topping. Top this tasty treat with rose petals and enjoy.

Best Vegan Enchiladas: Can They Beat My Mom’s?

This Vegan Juicy Lucy Is Worth the Food Coma