In 2013, Justin Timberlake donned a tofu costume and performed in the iconic Saturday Night Live (SNL) skit, “Veganville.” Today, Veganville is more than just a fictional store – it actually exists in downtown Toronto. The Vegandale Village occupies a full city block, enticing the vegan (and non-vegan) community to gather and celebrate the cruelty-free lifestyle.

According to the neighborhood’s website, Vegandale is a “mecca for the ethically minded and hungry, with the best of vegan food, goods, and services co-existing on one city block.” A slight spin-off from Timberlake’s Veganville, Vegandale was coined by the locals after several vegan businesses moved into the Parkdale area.

Vegandale is governed by a management group called The 5700, which encompasses the three successful vegan companies that reside on the block. The businesses include Doomie’s, The Imperative, and the newest member, Mythology Diner.

Each venue has something unique to offer to visitors. Doomie’s provides a cool, contemporary bar scene with outrageous veganized versions of fried and meaty dishes. The South in Yer Mouth represents the cuisine perfectly – picture a vegan barbecue pulled pork sandwich topped with mac and cheese, served with a side of french fries. On the retail side, The Imperative is a vegan essentials store specializing in ethical fashion, beauty products, and homewares. Finally, Mythology Diner characterizes an upscale retro diner serving up elevated versions of classic diner food…and a full bar. Customers have raved over its Meatiest Veggie Loaf Platter Ever, The Reubenator, and the plethora of curated vegan cocktails. 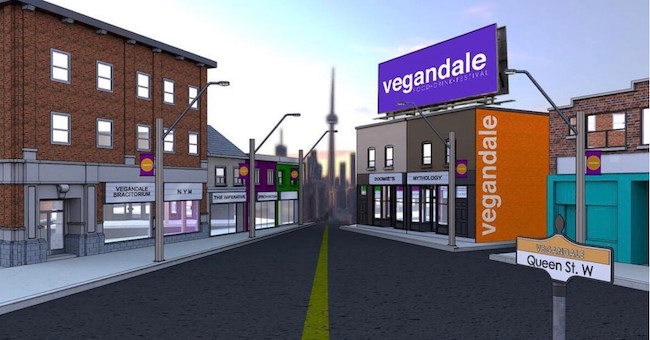 Vegandale is expected to more than double in size by the end of 2018. Three new vegan restaurants – Vegandale Bracitorium, Prohibition Pie, and NYM – are scheduled to open this summer, in addition to one more business yet to be announced.

Like the SNL skit, Vegandale is fond of tongue-in-cheek marketing. The neighborhood identifies itself as “the land without milk and honey.”  Further, it plans to “take over the world” with its newly expanded Vegandale Food Drink Festival. In 2018, Vegandale will invade Chicago, New York City, Toronto, and a secret destination for a full day of vegan festivities.

In the words of Justin Timberlake, “Bring it on down to Vegandale!”