According to the company, the new dairy-free desserts have a velvety, custard-like texture and light, vanilla flavor. Instead of cream cheese, the filling is made from a blend of lima beans, coconut oil, konjac, and agave syrup. Konjac, a common ingredient Japanese cuisine, is often used in place of gelatin due to its similar texture. The crust is made from oats and graham flour. Trader Joe’s suggests topping the cheesecakes with fresh fruit or dairy-free whipped cream. 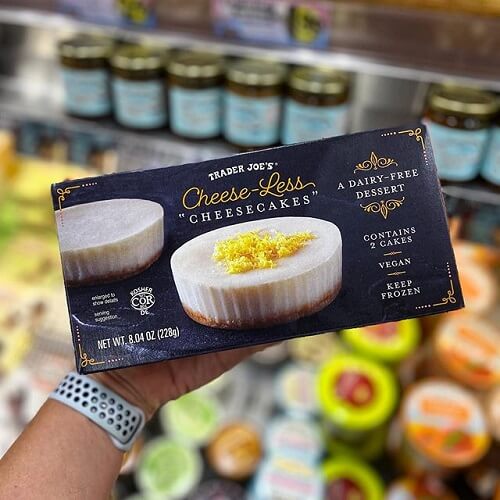 Vegan desserts are nothing new to Trader Joe’s. Its vegan banana bread was famously hard to find when it launched in late 2018. It launched its first almond-based ice cream earlier this year in the flavor vanilla. Its Soy Creamy Cherry Chocolate Chip ice cream disappeared from the freezer aisle last year only to be brought back due to customer demand. Vegan milk chocolate bars made with almond butter are also on the way.

Speaking on episode 21 of the Inside Trader Joe’s podcast, Alison Nadler Guerette, category manager for candy, cookies, and cereal, said that the bar tastes similar to dairy-based milk chocolate.

“I wouldn’t have known the difference if I hadn’t been told. It just tasted like really good creamy milk chocolate,” she said.

Plant-based products are in high demand at Trader Joe’s. The chain has gained a strong fan following due to its other affordable vegan options. Late last month, all 503 locations launched the Impossible Burger, retailing for $7.99 per 12-ounce package. The chain also carries meat-free turkey and beef burgers under its own label. Both products are made from pea protein and like Impossible meat and the Beyond Burger, look similar to raw meat before cooking.

Other recent launches include vegan mac and cheese in the deli aisle. The ready-to-eat meal features a dairy-free sauce made from butternut squash. Cashew-based cheese slices and shreds are also new to the store, as is shelf-stable hemp milk.