Vegan mac and cheese is coming to Trader Joe’s.

The new dairy-free mac and cheese is available to order for some stores across the country, Veconomist reports. It is unconfirmed if it will be sold at all Trader Joe’s locations.

The vegan mac and cheese comes in a 20-ounce tub and will be available in the ready-to-eat section of the store. The sauce is made from butternut squash, coconut milk, dairy-free butter, and nutritional yeast. Customers in the New York metropolitan area have already reported finding the new vegan mac and cheese. 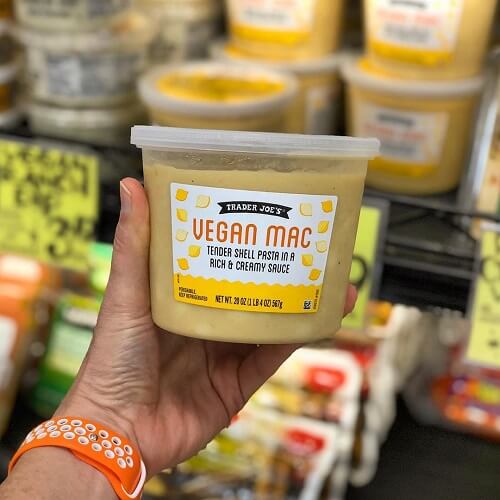 Trader Joe’s vegan mac and cheese is made from butternut squash. | @bigboxvegan

The news shortly follows the launch of Trader Joe’s new Plant-Based Protein Patties. The vegan patties have a lot in common with the Beyond Burger. Pea protein is the made ingredient and the patties are pink like raw meat, but brown when cooked in a skillet. Each burger contains 18 grams of protein compared to 20 grams for the Beyond Burger.

Vegan milk chocolate bars are also on the way. In episode 21 of the podcast “Inside Trader Joe’s,” co-host and director of words, phrases, and clauses Tara Miller enthused over the new product. Instead of dairy, it uses almond milk for a creamy consistency.

Miller said that she “wouldn’t have known the difference” if she had been told that the bar is dairy-free.

She added, “It just tasted like really good creamy milk chocolate. I feel like our vegan customers are going to absolutely flip for that particular product.”

According to the podcast, the vegan milk chocolate bar comes as a result of consumer demand. Other recent vegan launches at Trader Joe’s include kale gnocchi, coconut milk-based ranch dip, vegan chicken-less seasoning, and oat milk. It also now stocks dairy-free coconut whipped cream, which was originally launched as a seasonal item.

This marks the first time that Trader Joe’s has launched dairy-free mac and cheese. But, it’s not the only option in U.S. stores. Annie’s Organic, Amy’s, Daiya, Modern Table, Field Roast, Sweet Earth, and Uptons Natural are available throughout the country.