Updated October 2, 2019. US-based travel and restaurant company TripAdvisor is the latest to cut ties with SeaWorld.

The move is an extension of its animal welfare policy. Last year, it announced that along with its subsidiary Viator, it would no longer sell tickets to a number of shows and exhibits that use endangered or wild animals for entertainment.

In a press release last year, the company stated, “TripAdvisor will not sell tickets to, or generate booking revenue from, specific experiences where captive wild or endangered animals are forced to perform demeaning tricks or other unnatural behaviors in front of the general public, or where they are featured as part of a live circus or stage entertainment act in a demeaning manner.”

The company defined “demeaning” as situations whereby the animal involved is either drugged or forcibly trained to perform in a way that does not benefit the animal. Circus acts are notorious for the use of abusive methods in order to force captive animals to perform unnatural behaviors.

The company further clarified that certain animal encounters will still be permitted under the TripAdvisor animal welfare policy.

Horseback riding, petting zoos with domestic animals, aquarium and invertebrae “touch” encounters for “educational purposes,” feeding interactions (as long as the animal is not forced to comply and can “disengage from contact at will”), voluntourism for endangered species, and some fishing excursions are still permitted. 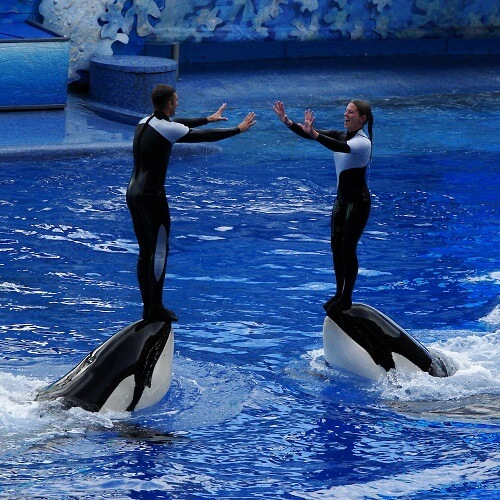 SeaWorld has been accused of cruelty to animals. | image/Wikimedia Commons

Turning Its Back on SeaWorld

Up until now, it has sold tickets to SeaWorld. However, its animal welfare policy now includes the marine park, as well as other attractions that breed captive whales. It has taken this step after extensive talks with marine biologists, zoologists, and conservationists.

The site will still sell tickets to seaside cetacean sanctuaries, but only in circumstances where it is not realistic for the animals to be released back into the wild.

It will also still sell tickets to attractions certified by the World Association of Zoos and Aquariums, but only in instances where cetaceans are no longer bred — or imported in from other locations — for entertainment purposes.

Over the next few months, TripAdvisor will remove all captive cetacean attractions that breach its new policy from its website.