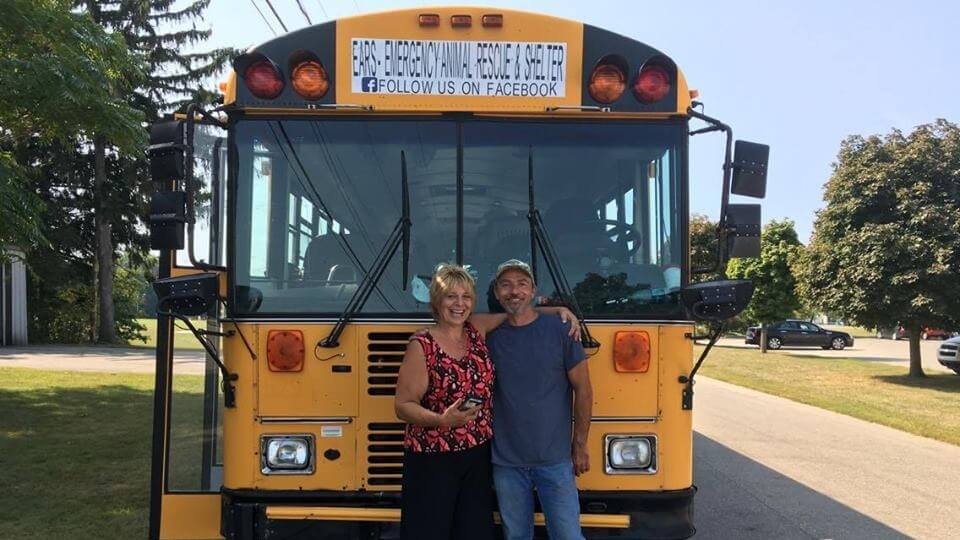 Tony Alsup, a trucker from Greenback, Tennesee, recently saved more than 60 animals from the floods of Hurricane Florence in his portable Emergency Animal Rescue Shelter, aka Noah’s Ark, aka a school bus, and he’s still going.

Earlier this month, the 51-year-old drove cross-country to save as many animals as he could from shelters that lay in the path of the hurricane, delivering them safely to a friend’s privately run shelter in Foley, Alabama. Whilst at the shelter, owner Angela Eib-Maddux said the animals received a wash, fluffy blankets, and even spa treatment.

Speaking to the Washington Post during a well-earned waffle stop on his journey, Alsup said, “I’m like, look, these are lives too. Animals – especially shelter pets – they always have to take the back seat of the bus. But I’ll give them their own bus. If I have to pay for all the fuel, or even a boat, to get these dogs out of there.”

According to the newspaper, at the time of the interview, Alsup had saved 53 dogs and 11 cats from the hurricane. This is the trucker’s fourth rescue mission, it all began with Hurricane Harvey last year, and since, he has also helped animals during Irma and Maria.

Alsup aims to continue with his rescue work for as long as he can and save as many “leftover” animals as possible. “It’s so easy for people to adopt the small pets and the cuties and the cuddly,” he told Greeneville News. “We take on the ones that deserve a chance even though they are big and a little ugly. But I love big dogs, and we find places for them.”

Alsup isn’t the only one thinking about the animals affected by the hurricane. Earlier this month, Iowa City cafe Trumpets for Blossom chose to break its tradition of supporting local causes and raised money for the animal victims of the natural disaster.

The cafe is donating to “A Well-Fed World,” a hunger relief and animal protection organization currently helping farm animals in need. Owner of the cafe Katy Meyer said, “I hope [customers will] understand and support us in our efforts to help those affected rebuild these invaluable places and continue to care for these beautiful sentient beings.”