The Humane Society International (HSI) released the findings in 2018 and again in 2019. The animal welfare organization aims to encourage consumers to choose more environmentally-friendly meals over the festive period.

According to HSI’s study, a roast turkey dinner for a family of six — including meat-based gravy and pigs in blankets — emits 23.5 kilograms of CO2e. This is the same amount of carbon dioxide a standard petrol car emits when driving 78.5 miles.

If 85 percent of Brits who usually consume animal products at Christmas opted for plant-based options, they would prevent 131 million kilograms of CO2e from entering the atmosphere. These emissions, caused by one meal on one day, are the equivalent of driving 438 million miles.

By contrast, a vegan nut roast for six people emits only 9.5 kilograms of CO2e. This is the same as driving 31.6 miles. The roast includes potatoes cooked in vegetable oil, vegan pigs in blankets, sage and onion stuffing, and vegetable gravy.

Previous studies have suggested that a vegan diet can reduce one’s environmental impact by up to 84 percent.

HSI adds that if all Brits opted for a plant-based Christmas dinner, two million turkeys and 125,000 pigs would be saved from slaughter. 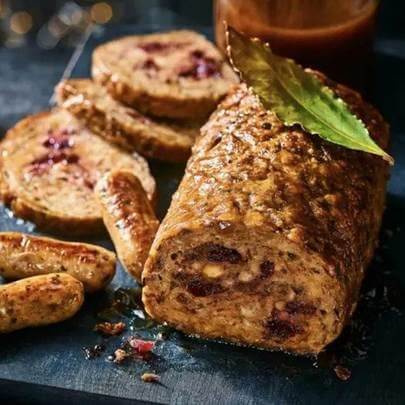 This year, a number of major supermarkets are offering vegan Christmas mains. Marks & Spencer has launched a plant-based turkey roast and vegan pigs in blankets and Tesco is offering a Butternut Squash, Mushroom, and Chestnut Wreath. Waitrose, Morrisons, Sainsbury’s, and Iceland are among the other major chains offering plant-based options.

“This Christmas, more Brits than ever before will be cooking up delicious turkey-free festive food!” said Charlie Huson, the forward food manager at HSI, in a statement.

“The grim reality of thousands of turkeys crammed in dark sheds, enduring life and death on factory farms, as well as the climate cost of the meat industry, are making more and more people want to celebrate in a more ethically conscious way,” he continued. “We can all put peace on our plate this Christmas time.”