The closure of the plant—which is located in Waterloo, Iowa—comes after the county’s health department linked it to 182 of the county’s 374 confirmed cases of the coronavirus. The plant had already been operating at reduced capacity due to call-outs by many of its 2,800 workers.

According to the National Pork Board, the Waterloo plant processes about 19,500 hogs each day. This accounts for nearly 4 percent of the entire country’s pork-processing capacity.

In response to the surge in meat plant closures, Tyson Foods’ chairman John H. Tyson said in a statement: “The food supply chain is breaking.”

“In addition to meat shortages, this is a serious food waste issue,” Tyson added. He continued: “Farmers across the nation simply will not have anywhere to sell their livestock to be processed when they could have fed the nation. Millions of animals—chickens, pigs, and cattle—will be depopulated because of the closure of our processing facilities.” 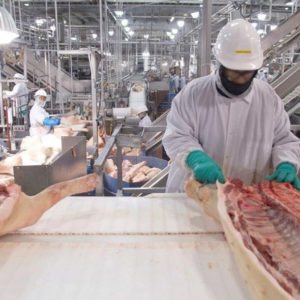 ‘Immediate Action’ Is Needed To Save Lives

Earlier this week, three Democratic state lawmakers filed a complaint with the Occupational Safety and Health Administration. The legislators cited complaints by Waterloo plant employees of unsafe working conditions during the pandemic.

“Given the huge spike in positive cases in Black Hawk County over the last week, the accounts we’ve heard from employees at Tyson can no longer be ignored,” Iowa State Rep. Ras Smith, (D-Waterloo), who filed the complaint, said in a statement.

“We need immediate action from Governor Reynolds and Tyson to stop the outbreak in our community, protect workers, and save lives. The longer they wait, the worse the destruction in our community will be,” he added. 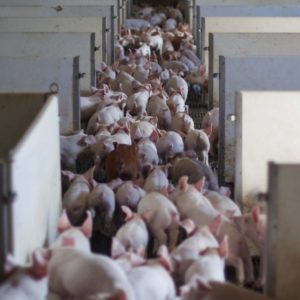 COVID-19 has forced slaughterhouses to close across the country.

Tyson representative Liz Croston confirmed to Business Insider earlier this month that two employees at its meat processing plant in Columbus Junction, Iowa had died due to the virus. The plant has been closed since April 6 but is now running with limited operations. Officials reported coronavirus-caused deaths at Tyson’s Dakota City, Nebraska, and Camilla, Georgia plants.

Tyson also announced plans to close its pork processing facility in Logansport, Indiana. The meat giant is suspending operations so that its more than 2,200 workers can get tested for COVID-19. With the Logansport plant closed, slaughterhouses connected to it—which produce 19 percent of the country’s of pork—will be forced to shut down, too.

Earlier this week, Cargill Ltd. announced it will temporarily close its beef plant located in High River, Alberta. The announcement comes after more than 350 workers tested positive for COVID-19.