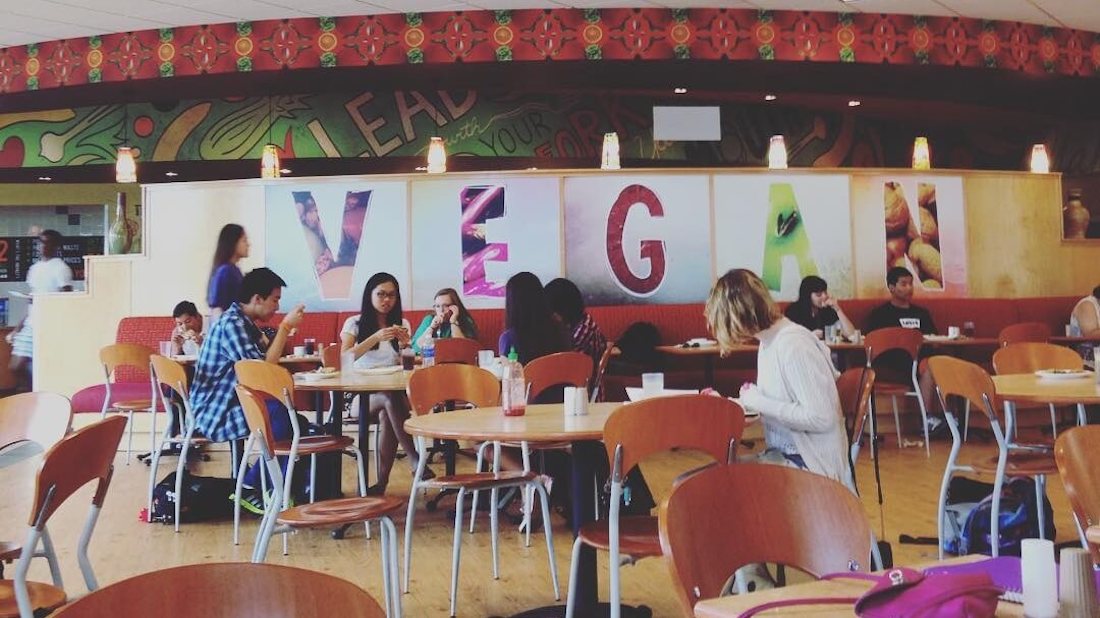 Nearly 70 percent, or about two-thirds, of U.S. college campuses offer vegan meals for breakfast, lunch, and dinner, according to a new report released by international animal rights organization PETA (People for the Ethical Treatment of Animals).

For the past five years, the organization has been keeping track of the availability of on-campus plant-based meal options and detailing in its annual “Vegan Report Card,” which is released through its youth division, peta2. According to the research, since 2013 the number of campuses that have received an “A Grade,” the second-best ranking, have more than tripled.

“There’s no question that a veritable vegan revolution is taking college campuses by storm from coast to coast,” said peta2 director of international youth outreach Ryan Huling. “Today’s informed and compassionate students are going vegan in droves, and peta2’s Vegan Report Card acknowledges the many schools that are feeding this demand with top-notch home-cooked vegan options for breakfast, lunch, dinner, and dessert.”

Every college is ranked according to the presence of dedicated vegan dining halls or stations, the availability of plant-based milk and desserts, and other criteria such as offering vegan breakfast, lunch, and dinner. Colleges and universities that made the “Dean’s  List,” or the schools that best meet student needs for vegan dining, include Duke, Brown, Stanford, and Tale. Oberlin College, Sarah Lawrence College, and John Hopkins University are close behind with an “A Grade” ranking.

Across the nation, more colleges than ever before are upping their plant-based offerings in response to rising student demand. Vegans and vegetarians aren’t alone in driving the demand. At Mean Greens, the vegan dining hall at the University of North Texas, it’s estimated that at least 80 percent of student diners are omnivores. Several other campuses are participating in plant-based culinary training programs in order to develop more vegan options. Last March, nonprofit organization the Humane Society of the U.S. launched a two-day program geared towards cafeteria and food service chefs.

According to leading food service provider Aramark, the younger generation is increasingly interested in eating less meat, driven by the health benefits of a plant-based diet. A recent survey revealed that 79 percent of members of Generation Z want to eat meatless at least once a week. Aramark, along with leading food service providers Sodexo and Sysco, are all working towards helping college dining halls add more vegan options to the menu.