The new doughnut creation will give customers an extra buzz along with their morning coffee for a completely vegan jumpstart to their day. Coined Almandes Are a Girl’s Best Friend, the company’s classic vegan doughnut is generously draped in a vegan Baileys almond glaze and adorned with flaked almonds, rose petals, freeze-dried raspberries, edible glitter, and the obligatory dusting of white sprinkles. In line with the company’s changing weekly menu, this flavor is only available until May 18.

Although Doughnut Time offers a variety of vegan flavors in its rotation, the Baileys doughnut was specifically inspired by National Vegetarian Week, which runs May 14 – 20. The company has also veganized one of its best-selling creations, Notorious P.I.G., in honor of this “veggie week.” This doughnut is enrobed in a sweet strawberry glaze, dolloped with strawberry buttercream, drizzled with a vegan cream glaze, then topped with multi-colored pastel sprinkles and a vegan-friendly Percy Pig candy decoration. 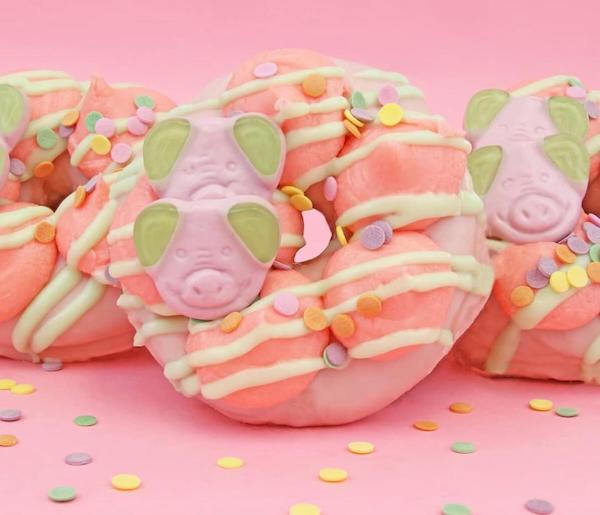 In addition to doughnuts, the company has also created a vegan Baileys Almande x Doughnut Time freakshake (a shake that has become increasingly popular on social media, featuring a decadent shake loaded with sweet toppings). The dessert combines cold-brewed coffee with the customer’s choice of milk (vegan options available), topped with vegan whipped cream and an Almandes Are a Girl’s Best Friend doughnut. However, this freakshake is only available for three days, from May 11 – May 13, at the Balance Festival in London.

Vegan doughnuts have hit the sweet spot with customers and business owners around the world. The one-note simple vegan cake doughnut has significantly evolved into raised varieties infused with various vegan creams and topped with a medley of drool-inducing glazes and edible delights. In the UK, Londoners can find vegan doughnut offerings at Doughnut Society, Crosstown Doughnut & Coffee, and Rubys. Elsewhere in the world, major metropolitan areas, as well as a few small towns, have also embraced the vegan doughnut craze.