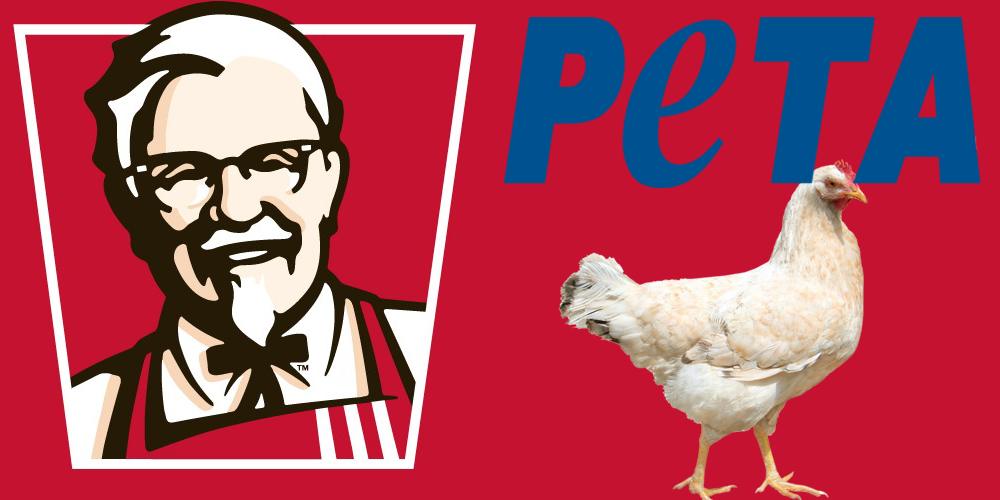 Disclaimer: If satire is not your jam, click here

KFC, a company previously known for killing at least forty chickens have now firmly aligned themselves with PETA and are seen by vegans as a bastion of hope in an otherwise cruel world.

Since their secret collaboration with PETA, it has been revealed that KFC (which as we all know stood for Killing Fluffy Chickens) has been flirting with the idea of changing their name to “Karing For Chickens”. (Their hearts are in the right place,  but spelling isn’t their strong suit).

Their first public foray into the surprising rebrand has hit the ground running with a television commercial in which The Colonel’s favourite chicken, (Laura) struts her stuff like the badass she is. Mr Sanders claims that  DMX’s ‘X Gon’ Give It to Ya’ is just one hip hop tune from a list of many that Laura has perfectly choreographed .

According to anonymous insiders Babs and Bunty, the campaign is a direct followup to PETA’s own ‘I’m Me, Not Meat‘ and the goal is to drive consumer awareness toward something about not eating meat, but both anonymous sources – Babs and Bunty – weren’t very articulate so it wasn’t exactly clear.

The star of the ad, Laura may have escaped becoming some god awful fried chicken product, but the trappings of fame have been her undoing. Her sudden popularity in both the chicken community and also the human equivalent known as the internet, saw her quickly dive headfirst into a world of drugs. She overdosed only two days after the release of the advert. Proving more than ever, that animals and people are the same.

Close friends of Laura said “she was the life and soul of any event. Her favourite hobby – aside from dancing to DMX and performing with her own rap group CWA – was looking at cat memes and filing false complaints to Tesco in the hopes of receiving free food”, Which is definitely not relevant to anything at all in any way.

Users on Twitter were in shock at the company’s new direction – less so about Laura’s death. One user on the popular social media site @iliterallyhavenoideawhatthepointofanythinganymoreis simply tweeted “FUUUUUCK”, but it’s unclear if this was actually to do with this story, there’s a lot going on in the world.

KFC responded to requests for a statement on their new brand identity – with this definitely real and certainly not made up quote – by stating “There’s only so many chickens you can kill before it all sort of gets a bit much. The early days were nothing but fun and games. But after a while… Mass murdering just sort of takes its toll… Also our product was shit. We’re sorry. We’re oh so very very sorry.”

KFC are now set to start deep frying napkins because “Why not.”, said one franchisee.

The move to a wholesome vegan message may come as a shock to outsiders, but many other companies within the meat-flogging industry are only shocked by the speed in which KFC have gone public. Burger King are considering crowning one of their cows, to show that cows – like humans – also have royalty for some reason. And a spokesman for McDonald’s confirmed that Ronald will almost certainly be killed, mostly because he’s fucking creepy and has now ruined football as well as the health of millions. Nandos has said nothing at this point and will probably continue to kill millions of chickens because they’re a terrible excuse for a restaurant.

You can see the glorious outcome of KFC and PETA’s collaboration along with genuine journalism here.