The British Parliament has announced plans to eliminate single-use plastic from its premises starting this summer. The first action will be to ban plastic water bottles and to implement a “latte levy” on disposable coffee cups, virtually eliminating plastics from the building by 2019. According to The Independent, the estate uses more than 750,000 to-go coffee cups and 125,000 single-use plastic water bottles annually.

The steps toward a plastic ban in parliament have been lauded by Mary Creagh, Labour MP and chair of the Environmental Audit Committee, who says that the move is an“important step to creating the world’s first plastic-free parliament.”

Parliament will stop the sale of all non-recyclable coffee cups on the premises as well as implement a trial 25p charge on all new cups in order to encourage members to switch to eco-friendly options like reusable coffee mugs. Authorities also say that parliament will introduce more water dispensers throughout the estate in order to stop the sale of bottled water and increase the use of reusable water bottles.

From coffee cups and straws to plastic bags and water bottles – Parliament has announced measures to drastically reduce single-use plastics in @HouseofCommons & @UKHouseofLords. Find out more at: https://t.co/GVasOezu43 pic.twitter.com/kbwZAJKjvz

The House of Lords has already taken steps toward the single-use plastic ban in parliament by replacing plastic straws with compostable paper ones and eliminating plastic condiment sachets. The House of Commons is also expected to discontinue the use of condiment packets. Tourist shops on the parliamentary estate will soon replace plastic bags with paper. Creagh hopes that the plastic-free parliament’s efforts will extend to the entire UK by introducing the latte levy across the country and see to a total ban by 2023.

Other members of parliament are on board with the measure. “Our challenging targets reflect parliament’s commitments to leading the way in environmental sustainability,” said Sir Paul Beresford, Conservative MP and chair of the Administration Committee.

“Parliament has acknowledged the damaging effect single-use disposable plastic is having on the environment and that it must lead the way in valuing our environmental future over convenience,” added Lord Laming, who also hopes that the actions will inspire other organizations and individuals to make similar changes in their everyday lives.

According to recent data, single-use plastics such as coffee cups, water bottles, plastic bags, and straws make up  89 percent of plastic waste in the ocean. Measures such as the ones that parliament hopes to put into action have already proven to be successful in the fight against single-use plastic. Following the plastic bag tax implemented in 2015, researchers have reported a 30 percent decrease in plastic ocean pollution. 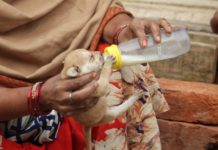