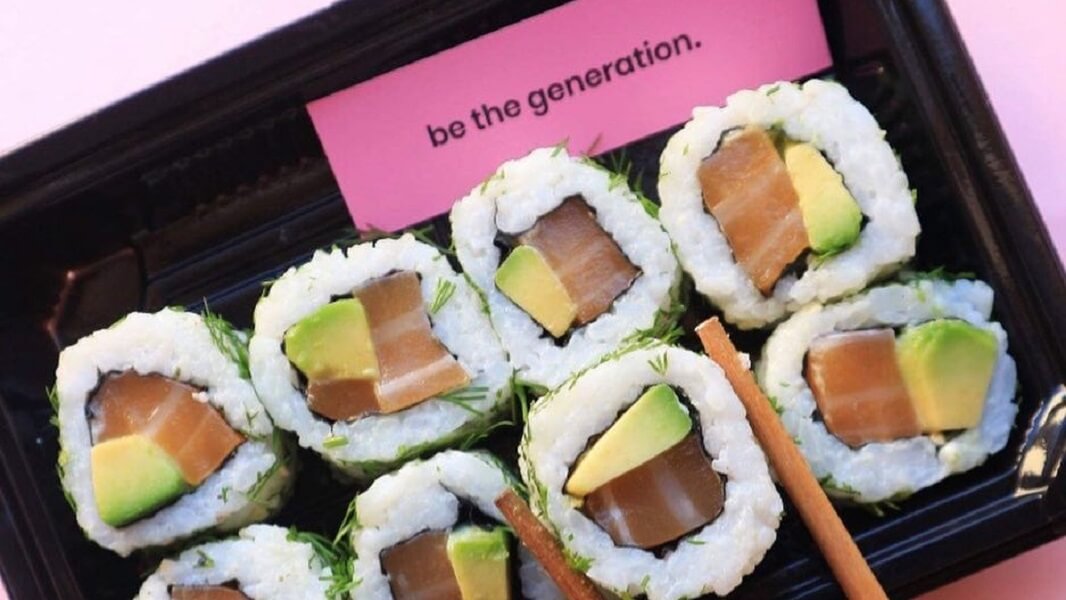 The vegan sushi roll features fresh dill, avocado, and Ima’s signature vegan salmon, which is made from marinated carrots.  The company was founded by a father-daughter duo committed to protecting the world’s oceans from overfishing.

Every piece of Ima sushi is hand-rolled and sliced by hand, rather than by machine. Co-founder and owner Jessica has been hand-rolling sushi using a bamboo mat since she was six-years-old. The name, Ima, is the Japanese word for “now.”

IT’S HERE…VEGAN SALMON in @planetorganic stores NOW?? (We are SO EXCITED for you to try!!)⁣ ⁣ ⁣ Tag your vegan bestie to be in with the chance to win some to share! All you’ve got to do is…⁣ ⁣ ⁣ ? tag your vegan bestie(s) ? follow @weareima⁣ ? leave a comment on why you love Ima

In addition to combating overfishing using plant-based food, Ima is dedicated to fighting ocean plastic pollution. It is the first sushi company in the UK to use 100 percent biodegradable sushi trays.

“We’re friends of the ocean,” said the company. “It makes sense for us at ima, because sushi comes from the ocean but plastic sushi containers and soy sauce tubs are polluting the ocean. We want to change this.”

Good Catch Foods, co-founded by vegan chefs Derek and Chad Sarno – the former being the creator of Tesco’s “Wicked Kitchen” plant-based ready meal range -, recently launched vegan tuna fish in Whole Foods and online through Thrive Market earlier this year. Rather than opt for marinated produce, Good Catch Foods makes its product from a proprietary blend of legumes to make a vegan tuna with a protein content similar to the real chunk light tuna.