One of the UK’s leading animal research centers is due to close down.

“This is no reflection upon the value or quality of MGU science, but a reflection of the changing scientific landscape,” MCU said in a statement.

The news was welcomed by the National Anti-Vivisection Society (NAVS), a London-based nonprofit that campaigns against animal testing and promotes cruelty-free alternatives.“Growing scientific evidence shows that advanced human-relevant methods are more reliable than using animals,” NAVS president Jan Creamer said in a statement sent to LIVEKINDLY. “We hope therefore that these plans signal a concerted shift by research institutions to move away from misleading animal tests and towards better modern science.” 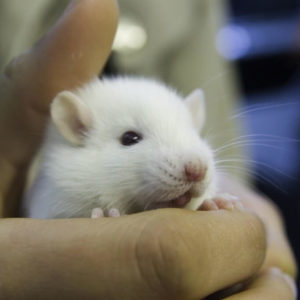 Steve Brown, president of the MGU, told The Guardian that staff are “perplexed” by the decision. The unit works closely with the Harwell Insitute’s Mary Lyon Centre, a “world-class” mouse facility that gives researchers access to develop mouse models for genetic disorders such as diabetes, breeding and mouse phenotyping, and a bespoke service called the Genome Editing Mice for Medicine to generate genetically modified (GM) mice.

Animal Research in the UK

More than two-thirds of the 3.7 million animals used in British labs are used for GM research, according to NAVS. These animals are intended to be abnormal in some what in order to better understand human genetic disorders. The organization notes that the research can lead to prolonged animal suffering as a result of repeated surgeries, implantation, blood and tissue testing, and harm caused by intended and unintended mutations. Only three to five percent of animals have the desired genetic outcome — the remainder are killed and discarded.

The announcement of the plan to shut down the MGU follows the recently announced closure of The Wellcome Trust’s decision to close its mouse facility at the Sanger Institute near Cambridge. Wellcome Trust director Jeremy Farrar told the Observer earlier this month that its strategy is changing in light of recent scientific innovations that allow it to use fewer animals.

While MGU states on its website that it is “proactively committed to implementing” the 3Rs (replacement, reduction, and refinement of animal use), NAVS points out that director Brown was only able to name one of the letters on BBC 4’s Today radio program.

A final decision will be made by the MRC council in December 2019.