Whether you love a crisp lager, a wholesome stout, or a good IPA, beer is a beverage beloved by many. Apart from the occasional addition of milk or honey, you would think that most beer is vegan. But many brands contain hidden animal ingredients.

It all has to do with what’s used during the fining process, the step that filters out suspended yeast, proteins from the malt, and polyphenols from beer to produce a crisp, clear beverage, according to Beersmith.

Animal-derived ingredients like gelatin and isinglass — the dried swim bladder of a fish — are common fining agents. But beer can also be filtered with Irish moss seaweed, silica gel, or Biofine, a vegan-friendly solution comprised of silicic acid (SiO2) in water.

An increasing number of breweries are doing away with animal ingredients thanks to increasing demand for vegan options from the Millennial crowd. Barnivore, an online database of more than 44,000 alcoholic beverages, is known to be a reliable source of what’s vegan.

“Millennials are careful about what they eat and drink and as a result, are making conscious decisions to take better care of themselves, including when it comes to alcohol,” Aleksandrina Yotova, a consumer analyst at GlobalData, told Beverage Daily last May. “Vegan is also increasingly trending. The fact that major brewers like Guinness have committed to 100 percent vegan-friendly beverages in recent years also suggests this trend will expand hugely in the future.” 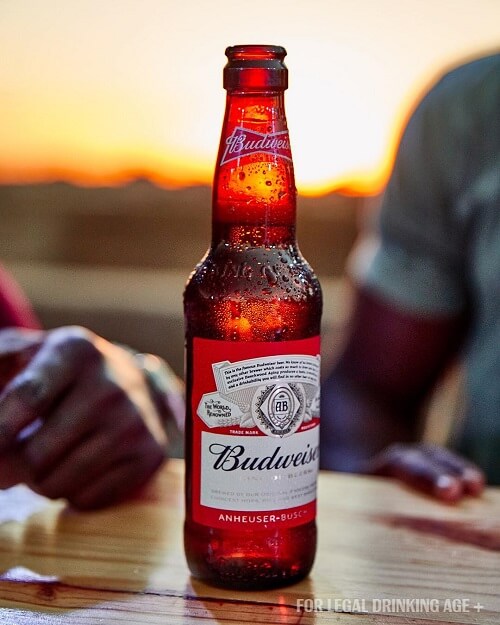 Budweiser is suitable for vegans | image/Budweiser

Regardless of personal preference, Budweiser is arguably one of the most well-known beer brands in the world. The company, owned by Anheuser-Busch, is more than a century-and-a-half old with strong German roots. Its Budweiser, Bud Light, and Bud Light Lime-a-Rita don’t contain any animal ingredients. 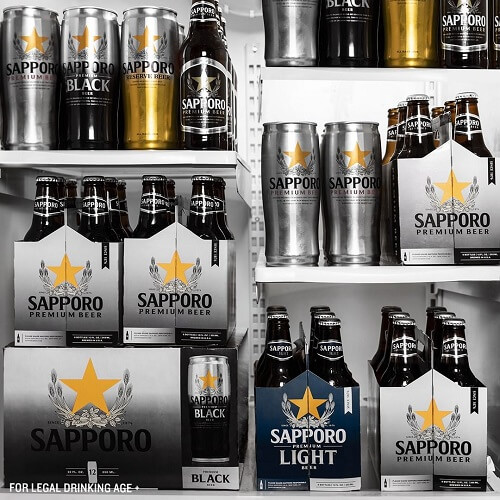 There are no animal ingredients in Sapporo beer | image/Sapporo

Japan’s oldest beer brand and the top selling Asian beer in the US, Sapporo, doesn’t contain animal ingredients or use any in the filtration process. It was founded by Seibei Nakagawa in 1876, who was trained by German brewmasters. The company made its US debut in 1964, where it won over beer lovers across the country. 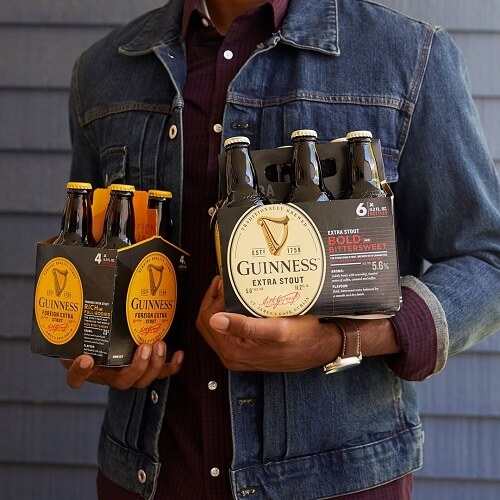 Most Guinness beers are vegan | image/Guinness

Iconic Irish brewery Guinness used to use isinglass to filter its stouts. But in 2015, the company announced that it would go vegan — a promise that the company made good on by 2017. Today, most varieties of Guinness are vegan. Only the Black Lager, The 1759, and the Harp Lager aren’t vegan, according to Barnivore. 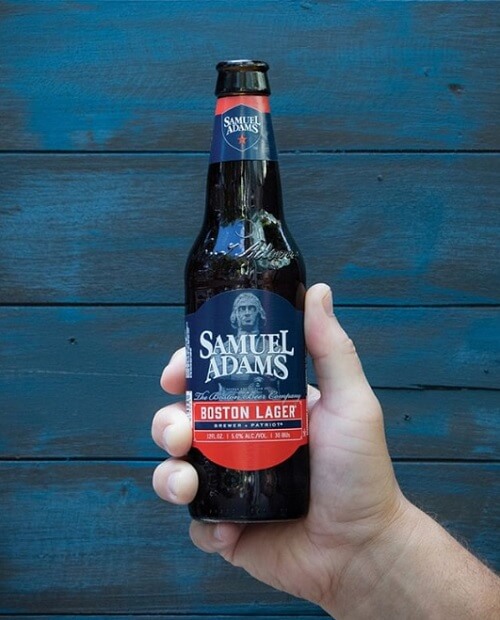 A great full bodied craft, Samuel Adams’ Boston Lager packs a punch at 5 percent ABV. Not only that, the majority of Sam Adams beers are vegan, including its Summer Ale, Black Lager, and OctoberFest. 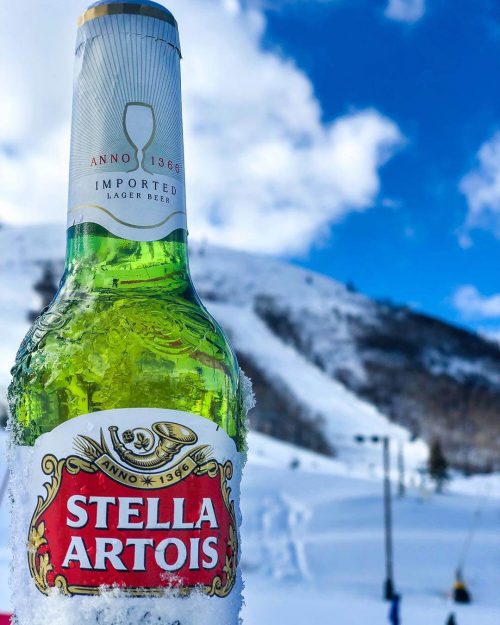 Another strong yet crisp beer. Stella Artois is a pilsner from Belgium that has an impressive heritage when in 1708, Sébastien Artois became head brewer at a brewery established in 1366. Artois purchased the brewery in 1717 and the rest is history. According to Barnivore, most of the brand’s beers are suitable for vegans. 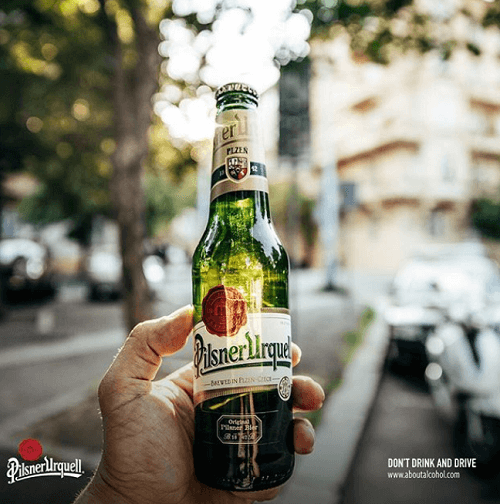 Pilsner Urquell is made with only three ingredients | image/Pilsner Arquell

On the 5th October, 1842, Pilsner Urquell brewed the world’s first golden pilsner and the unstoppable recipe has remained the same ever since. This new beer is made from only three ingredients: water, barley, and Czech hops. As for the flavor, it is said to “develop in the middle, followed by a refreshing, clean finish and balanced aftertaste.” 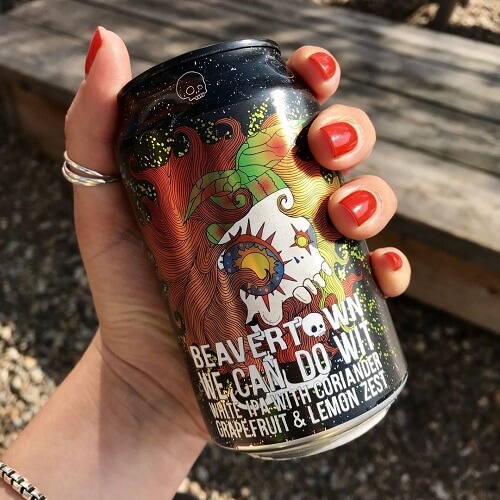 London-based Beavertown Brewery was born from experimentation and started with home-brewing. All its beers are vegan, except for recipes that include honey. If you aren’t already sold on vegan beer, the company’s eccentric and funky packaging will win you over. 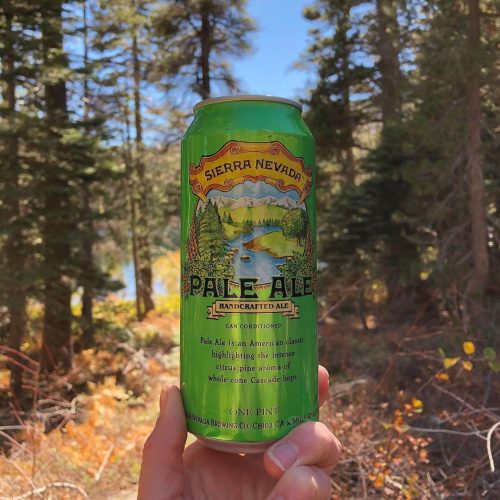 Even from its early days, California-based Sierra Nevada has been passionate about sustainability. This family-owned vegan beer company is nationally recognized for its environmentally-friendly practices including solar panels, recycling, and water conservation. 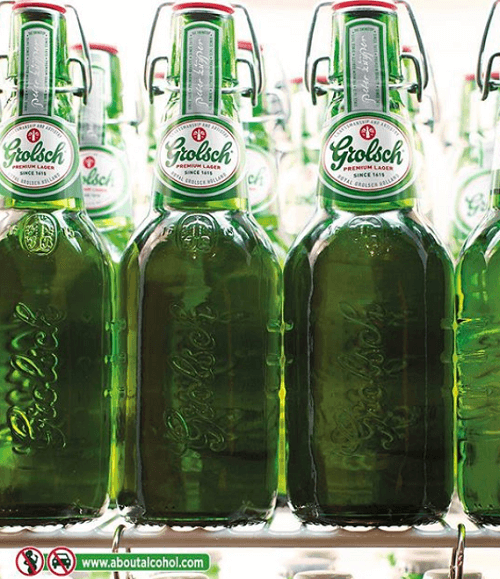 Founded in 1615, Dutch brewery Grolsch has been making beer for hundreds of years. It’s best known for its pale lager, the Grolsch Premium Pilsner, but most of its beers (except for the Milk Stout) are vegan. 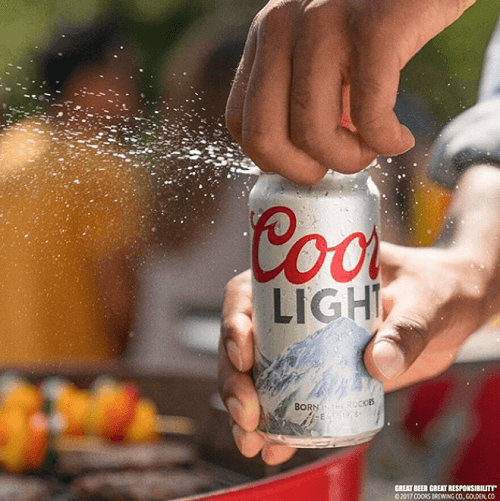 Boulder, Colorado-based brewery Coors Light is vegan-friendly, except (sadly) if you’re in the UK. Most varieties are free from animal ingredients, according to Barnivore. 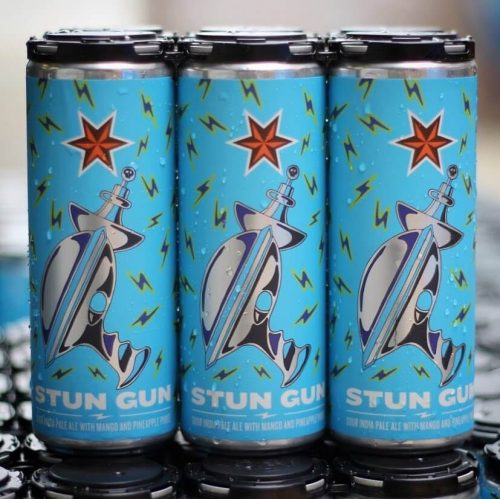 Sixpoint Brewery is all vegan | image/Sixpoint

Brooklyn-based craft brewer Sixpoint is completely vegan — including the C.R.E.A.M. ale, which used to be made with milk. The young company, founded in the far reaches of Red Hook in 2004, nixed all animal ingredients a few years ago. Sixpoint is known for its fun, seasonal flavors as well as its mainstays like Resin and Sweet Action. 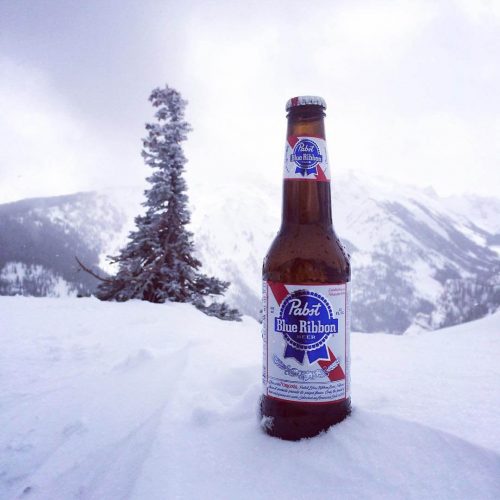 There are no animal ingredients in iconic American lager brand Pabst Blue Ribbon (PBR) — it’s brewed with just malted barley, corn syrup (not high fructose corn syrup), hops, water, and cultured yeast. PBR was founded in the late 19th century and experienced a recent boost of popularity in the early aughts as it was embraced by urban hipsters. There’s even a non-alcoholic version on the way. 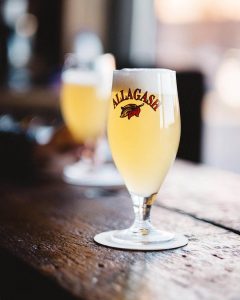 Maine’s Allagash Brewing Co. is vegan except for one variety | image/Allagash

Portland, Maine’s own Allagash Brewing Co. is vegan with the exception of its Hive 65. Inspired by Belgian brewing techniques, Allagash aims to incorporate sustainable practices into its business. The company buys local ingredients and supports local organizations. Corks collected from its brewing room are donated to a company called Re-Cork, which upcycles corks into things like yoga mats and sandals. 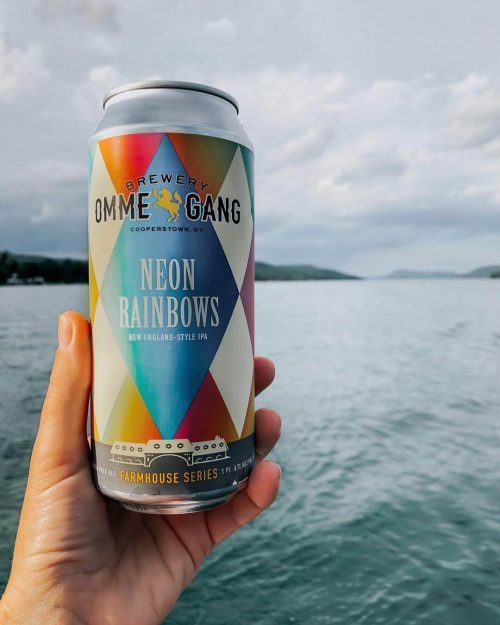 Taking its name from a medieval Belgian festival that still runs to this day, Ommegang Brewing Company is vegan. The Cooperstown, New York-based company opened the first farmhouse brewery in the US in more than 100 years in 1996, and has made its mark in the craft beer scene. It’s famous for its special “Game of Thrones” inspired brews as well as its Belgian-style ales. 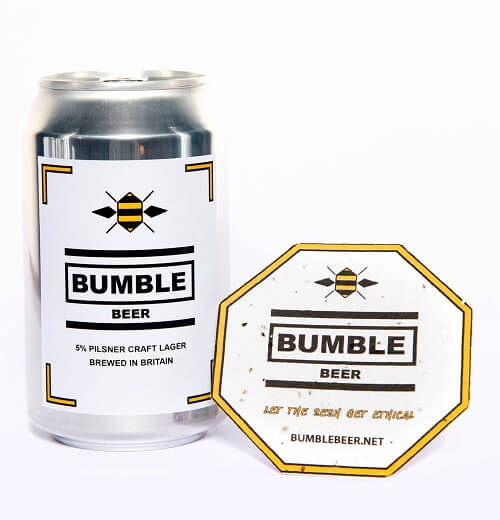 UK-based brand Bumble Beer crafts a pilsner-style lager. Originally brewed with honey, Bumble Beer went completely vegan and aims to create conversation around veganism, sustainability, saving bees, and an eco-conscious lifestyle. The brand aims to work only with organic producers, develop more planet-friendly packaging, donate 10 percent of proceeds to bee-saving charities, and to become a zero-emissions company within the next 10 years. 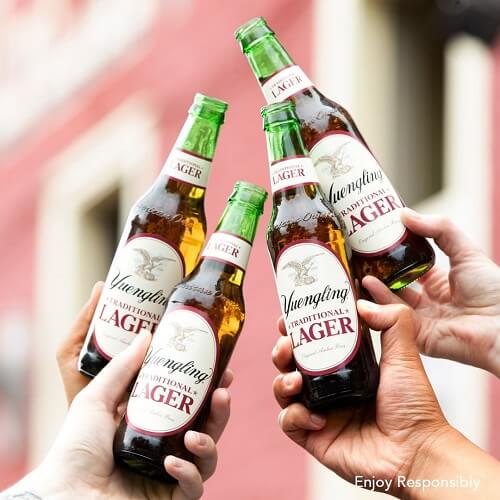 All Yuengling beer is vegan | image/Yuengling

Not only is Yuengling vegan, it’s known for being America’s oldest brewery. Founded by German immigrant David G. Yuengling in 1829, the Pennsylvania-based brand specializes in traditional amber lagers and American pilsners. It also aims to incorporate sustainable practices into its business, including purchasing local ingredients, recycling materials, using spent grain as fertilizer, and supplying food processors with spent yeast, which is used as a protein supplement. 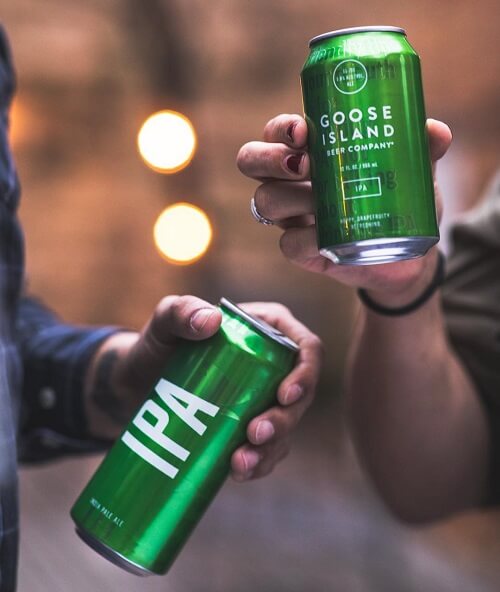 Goose Island Brewery was born out of Chicago’s Lincoln Park neighborhood in the late 1980s. It offers a wide variety of beer including IPAs, APAs, Belgian-style ales, lagers, and plenty of seasonal brews. In 1992, Goose Island pioneered the practice of ageing beer in bourbon barrels. The company extended the practice to include wine barrels in the early aughts, which infuses its beverages with unique flavor notes. 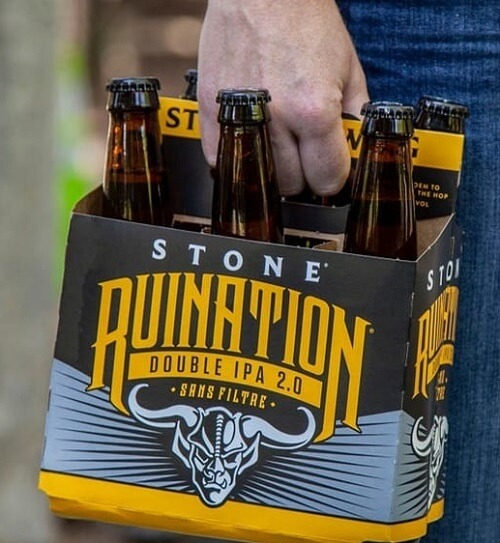 Founded in San Diego in 1996, Stone Brewing Co. has come a long way from its microbrewery roots. The Cali-based brand was named the “All-time top Brewery on Planet Earth” by Beer Advocate twice and is the ninth-largest craft brewer in the US. Its restaurant, Stone Brewing World Bistro & Gardens in Escondido, Calif., has been recognized for its environmentally friendly practices including using local produce and reclaimed materials. With more than 36 varieties of beer to choose from, Stone Brewing Co. is almost all vegan, according to Barnivore. 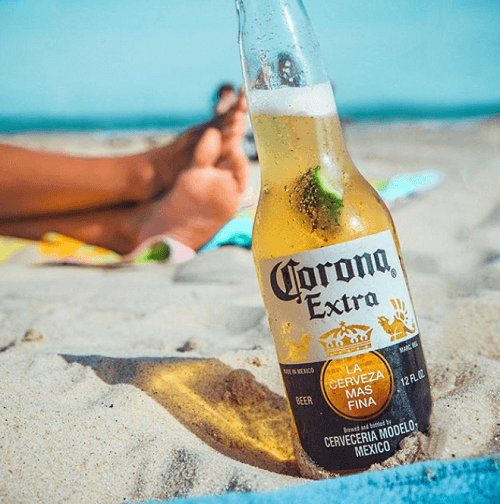 Mexican pale lager Corona, one of the most readily available beers on the market, is vegan. Known for its light, refreshing taste (especially when served with a lime wedge) with a fruity, honey-like aroma, and a crisp balance of hops and malt, this cerveza is perfect for summer days spent outdoors. Corona is owned by Mexican brand Grupo Modelo, which also makes the vegan-friendly Modelo Negra, Modelo Especial, and Modelo Light.