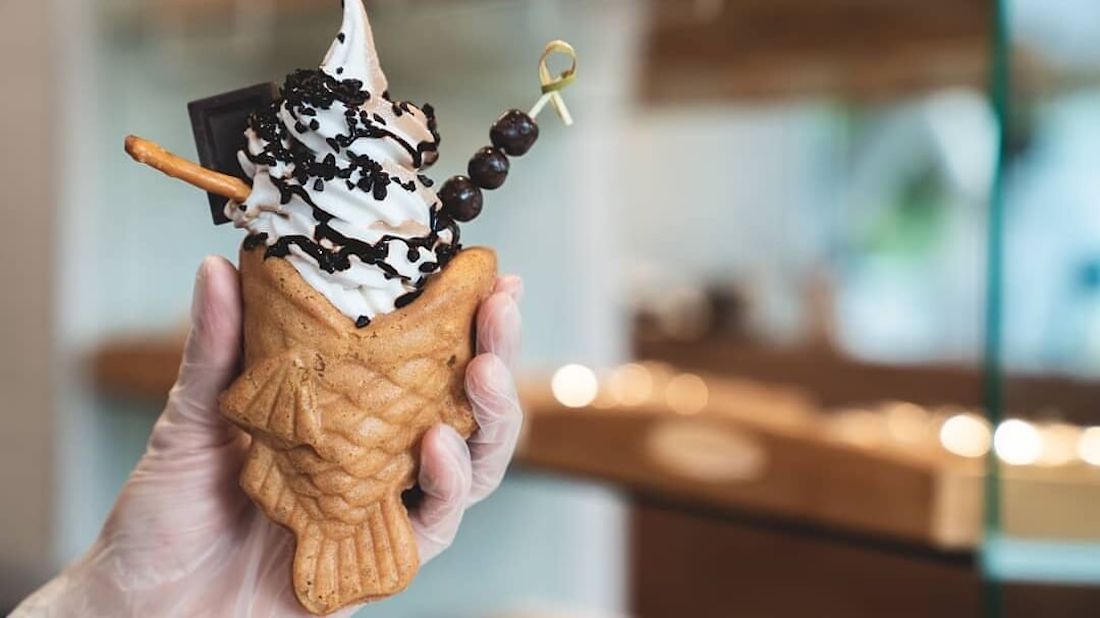 At Stuffies Pastries Cafe in North Vancouver, Canada, customers will find a rare, vegan version of a beloved (and trending) Asian dessert. The cafe specializes in making taiyaki, a fish-shaped sweet pastry that originates from Japan, filled with dairy-free soft-serve ice cream.

Traditional taiyaki is made with a cake-like batter that’s cooked in a fish-shaped iron mold. The open fish mouth is typically filled with sweet red bean paste, custard, chocolate, or mashed sweet potato. The pastry’s taste and texture most closely resemble a waffle, soft and pillowy on the inside, golden and crispy on the outside. It has been a popular snack at Japanese festivals since the Meiji Era. Today, taiyaki can be found all across the country.

Ice cream-stuffed taiyaki is a new spin on the classic snack that has only just made its way to North America. Taiyaki NYC was one of the first to bring this Instagram-worthy Asian dessert to the U.S. However, unlike Taiyaki NYC, at Stuffies Pastries Cafe, customers can order a vegan, gluten-free taiyaki stuffed with housemade nondairy soft-serve ice cream.

• [ Stuffies Pastries ] • ? North Vancouver, BC The ice cream is so creamy, you won’t believe it’s vegan ? Stuffies Soft Serve is glutenfree & vegan. It is served in an adorable taiyaki waffle cone & completed with toppings & drizzles. You can also check out their Stuffies & Cro-tai pastries for some more adorable eats ? ? @sharonfoodwithyou

According to the dessert shop, its signature sweet is made from organic, natural ingredients. Patrons can choose from chocolate, vanilla, or a swirl of both for soft-serve flavors and have the option of customizing their taiyaki with toppings, including fruit, candy, sprinkles, and mochi, a soft, chewy Japanese dessert made from glutinous rice.

vegan asian desserts are on the rise

In recent years, Asian desserts have seen increased popularity in the U.S., particularly in major metropolitan hubs like NYC. Eggloo, a chain specializing in Hong Kong-style bubble waffles stuffed with ice cream and toppings, launched a vegan version last year. Bonsai Kakigori, a new NYC-based dessert shop that opened earlier this year, gained popularity with its take on kakigori, a Japanese shaved ice dessert traditionally topped with condensed milk and syrup. Its Coconut Lime Crunch Kakigori is served with coconut cream rather than whipped cream. Other shops throughout the city and the country have created their own dairy-free version of the traditional dessert. Ube Kitchen, a Filipino-inspired pop-up, is well-known for its vegan halo-halo, a cold dessert that traditionally consists of crushed ice, evaporated milk, and toppings like fruit, jellies, sweet beans, coconut, and ice cream.

Stuffies’ new vegan option may be just the start of the Asian vegan dessert craze in Canada.